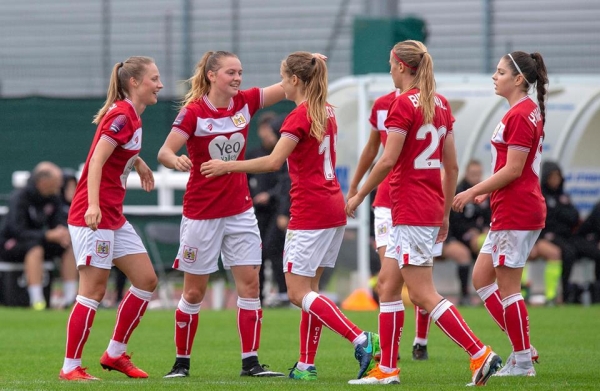 Bristol City Women play in the Women’s Super League, the top flight of female football in England. Their manager is Tanya Oxtoby, and they play their home matches at the Stoke Gifford Stadium.

Bristol’s history is a unique example in football for how they came to be the club that they are today. They were actually founded as their city rivals, Bristol Rovers WFC, following a merger between Rovers’ girls’ teams and Welsh side Cable-Tel LFC, applying their trade in the South West Combination League, two below England’s top flight.

Like many sides in the women’s game, they did not have their own stadium, and due to this played at eight different grounds in their early years. The side moved to their purpose-built home in 2011 in time for the first-ever Women’s Super League season, they were somewhat trendsetters in this regard, and even to this day only themselves and Manchester City do not ground share, with City’s coming as part of major redevelopments with international investment into the Etihad Campus and City Football Academy.

The then Rovers side reached the FA Women’s Premier League National Division within only five years, winning the Gloucestershire Cup six times in their seven years affiliated with the blue side of the city, and finding themselves in the FA Cup semi-final in their final three campaigns before their next change of name.

Before the commencement of the 2005-06 campaign, the club changed their name to Bristol Academy due to the increased involvement of the Bristol Academy of Sport with the team, however, they still kept both the colours of Rovers and their old nickname of the gas girls. Coinciding with this, Bristol Rovers’ men’s side found themselves languishing in League Two, and as is often the case in women’s case - a need for increased funds was met with the response of the club discontinuing all financing for the women’s side.

The Academy of Sport was able to bankroll the side to keep them afloat for the next twelve months, but there were serious doubts as to whether they would be able to achieve a sustainable future, and if they would even be able to survive beyond the summer of 2007. Making it through that tough time and coming out of the other side, another funding crisis was seen in 2009. Long-time manager Gary Green, who had been at the club since 2003, was shown the door. Corinne Yortson joined Arsenal, Stef Curtis to Chelsea and Gwennan Harries moved north to Everton, and without their key players finished 12th, bottom of the Women’s Premier League table.

Despite their horrific season, a change in the league system ahead of the 2011 campaign provided them with a lifeline. The inaugural Women’s Super League was created, and Bristol’s application was accepted. Their 2011 season saw them reach the final of the FA Cup versus Arsenal in front of 13,885 fans at the Ricoh Arena in Coventry. Due to this cup run and the fact that it was to be the first WSL, they also landed a space in the Round of 32 of the Women’s Champions League - drawn against Energiya Voronezh, they drew 1-1 at home but suffered a 2-4 defeat in Russia and did not advance.

Under future England boss Mark Sampson, who had been with the club from their final Premier League season, the gas girls saw fifth, fourth and finally second-place finishes in the league, whilst also reaching the final of the FA Cup once again in Sampson’s last season at the club. In 2013, they signed a sponsorship deal with Bristol City FC and changed their home kit from blue to red.

The reigns were handed to Dave Edmondson to take charge of the 2014 campaign, a shaky domestic performance placed them seventh, above a calamitous Everton who only managed four points from their fourteen games. However, luck was in their favour in the continental football secured by Sampson’s second-place finish. Dispatching Raheny United and later Barcelona, they suffered a 12-0 drubbing on aggregate to eventual final winners FFC. Frankfurt and bowed out in the quarter-finals of the Champions League.

Those heights could not be replicated the next year, however. Dave Edmondson departed after losing their initial three games of the season, and interim coach Lauren Smith was eventually replaced by Willie Kirk. Despite their best efforts, they finished rock bottom on only eight points, suffering relegation down to the second flight - WSL 2 at the end of the year.

Life as the Vixens

Embarking on their first campaign in the second tier in nearly 14 years, Bristol went one step further than just having financial links to Bristol City, finally changing their name to reflect the red half of the city. Now nicknamed the Vixens, the board placed their faith in Kirk’s side, and they were rewarded with promotion back at the first time of asking. Alongside Yeovil, they were joint top of the WSL 2 on 39 points, five above Everton after the season’s 18 games had been played out.

Their next two seasons under Kirk in the WSL were uneventful. To bridge the gap between the shift from summer to a more conventional winter calendar, the spring series was played, in which there was no relegation, with Notts County Ladies pulling out of league football only two days before their first scheduled fixture was due. Bristol City finished eighth in the spring series with a mere four points after their eight games, but they were still due a full season of WSL football. Bristol tallied 16 points in the 17/18 campaign, the final one before the reformation of the English leagues once again. Willie Kirk guided them to an eighth-place finish out of the ten in the league but departed in the summer.

The Vixens’ application to join the new ‘Women’s Super League’ was successful, with Tanya Oxtoby taking the reigns. They finished in a comfortable mid-table spot. with a solid total of 25 points, far from the relegation places. They have made a number of signings to solidify for this year in the hope to be able to replicate last season and carry on with their five-year plan.