FULL TIME Celtic only stood up a bit on the final 10 minutes, but were denied by some Ben Williams' saves. Hibernian didn't suffer a lot to maintain their narrow lead and could have won by a bigger margin if Deegan had been more inspired. Wanyama, Hooper and Kayal tried their luck but surely Celtic will regret Ambrose's chance. 2 yards from the goal, the Nigerian kneed the ball out. Hibernian win a month later and will now look for a final victory before the winter break. Celtic need a convincing home win in front of Motherwell to make up this sore defeat and the bad sensations it has given to the Celtic faithful. We'll be live here again to follow the action at Celtic Park against the Steelmen on Wednesday. Have a nice weekend!

92' Hibernian close down Celtic so they can't get the ball out of their back easily.

89' Kayal left-fotted shot is saved by Ben Williams. Some nerves in the Hibernian bench as they are close to a great league win, one month later, against the Scottish champions..

83' McCourt's cross is headed to corner by the Hibs defence. Again, this brings no danger to the hosts, they start a promising counterattack that dies quickly because of the lack of support up front.

82' Wanyama assists Hooper, whose shot is parried away by Ben Williams. No danger from the outswinging corner served by Izaguirre. Celtic are trying hard during the dying minutes of this match. Will they be just too late to rescue a point?

80' Corner for Celtic. Izaguirre's cross is miscontrolled by Samaras, Ambrose is at the end of it, in a clear position to score but knees the ball off target from 2 yards. What a chance for the Nigerian!!!

78' McCourt dribbles past a defender and crosses. His low cross is saved by Williams, Brown gets the loose ball and volleys it over the bar. It's been three straight attempts that have went over Williams' goal.

76' Tom Taiwo is on the book after a late challenge. Izaguirre crosses it, but the Hibs clear the ball out of the danger area. Celtic continue moving the ball around until Wanyama tries his luck from 20 yards, his left footed shot went over the bar.

74' Kayal collects a loose ball in front of Hibs' box but his shot goes way over the bar.

72' Wotherspoon replaces Leigh Griffiths, the goalscorer is applauded as he walks off the pitch.

70' Thomas Rogne is replaced by Beram Kayal. Ambrose will now play at the back.

68' Great work from Celtic, McCourt fins Lustig and the Swede crosses... James McPake clears the ball before someone punishes his team. No danger from the following corner.

65' Lassad makes room for Paddy McCourt. It has not been the Tunisian's best performance in a Celtic shirt.

Celtic can't find their way back into the game while Hibernian's position is getting more and more comfortable.

60' Deegan's run ends in an attempt from distance that goes out right. Celtic can't make their mark on the game right now.

59' Tim Clancy is substituted and makes way for Alan Maybury.

57' Good spell of posession from Celtic, Lustig got in a great position to try his luck, but he opted for an assist to Lassad. The Tunisian is disposessed and left in frustration.

55' Great build up from Hibernian, their passing is great, Griffiths' sets up Deegan well but his shot is less than impressive. A well worked chance with a really bad ending.

Celtic are having lots of time on the ball, but their passing has been poor so far, particularly in the later stages.

48' A tackle on Lustig ends in a good costless-kick position for Celtic. Izaguirre's cross from the right is headed off target. Celtic are pressing a little bit now, but they will have to improve their accuracy to hurt Hibernian.

47' Celtic got in a decent position to draw, but Lustig overhit his low cross a little bit and Lassad couldn't be at the end of it.

46' And we are underway again!

15:56. Raymey (@Raymey1979) from Glasgow hasn't been impressed with some individual performances: Izzy & Ambrose look a bit lost and i'd take off Lassad for Watt as he doesnt look a threat to score.The whole system is weird.

HALF TIME. Hibernian have been on the driving seat during the first 20 minutes, you can't discuss the fact that they have fought bravely against Celtic and they deserve their fair lead. They could have had an even bigger margin had Doyle been more inspired in front of Forster. The visitors have been slow, sloppy in their posessions and have lacked a good first touch to make their quality count above Hibernian's strength. Pat Fenlon will be proud of his team's display, but should be aware of Celtic, whose performances can be instantly made up thanks to Hooper's goals, Samaras wonders and Wanyama's brutal presence. It hasn't been Celtic's worst defensive performance, but they have definitely missed Mulgrew's calmness and positioning sense.

45' Hibs get a corner and Leigh Griffiths' cross hits the outside part of the net. Half time at Easter Road, both teams will have plenty things to think about during the following 15 minutes, Celtic will be, no doubt, the more worried of the lot.

42' Almost another Hibs goal! Eoin Doyle gets in a clear position to shoot, but Fraser Forster makes his angle narrower and the Irishman doesn't even hit the target. Celtic's back line were unlucky and a bit shaky, again.

40' Samaras gets in a dangerous area inside the box, his cross is parried away by Williams. Brown doesn't control the ball well and it's a goal kick for the hosts.

38' Celtic move the ball from the back, but the lack of movement up front makes them too predictable.

Uninspired display from the Celts, they will have to improve their touch and up their pace if they want to trouble a good Hibernian team, more defensive as the minutes pass but still well placed to start attacking moves from the left wing, where Paul Cairney has been the main threat.

29' Ambrose starts a run and is fouled in front of Hibs' area. Lassad takes the costless kick... over the wall, over the bar. The home fans cheer on as another decent chance is blown away.

27' Lassad almost heads a good cross coming from the right. The Tunisian is inches away from the ball and the chance passes away...

The game hasn't had lots of rhythm and only Hibs counterattacking moves bring some action to the game. The Celts haven't found their feet yet at Easter Road.

23' Celtic get a corner. Lustig's outswinging corner is headed by Ambrose, the ball goes well over the bar.

Another goal has been scored in the SPL so far, Kilmarnock are leading at Fir Park thanks to Borja Perez's strike. 0-1 for Kenny Shiels' men.

16' Celtic are trying to move the ball better to hold Hibs energy. Hooper was in a good position but the chance was disallowed because the English striker was offside.

12' And Doyle could have made it two!!! He was at the end of a costless-kick from the left, Griffiths assisted well but the Irishman failed to test Forster from close range.

9' GOOOOOOOOAAAAAAAL!!!! LEIGH GRIFFITHS SCOOOOOOOOOREEEESSSS!!! 1-0 for Hibs after some misunderstanding between Rogne, in the starting lineup today for the first time in a while, and Fraser Forster. The Scottish striker grabs the opportunity with both hands and gives the home team an early lead. 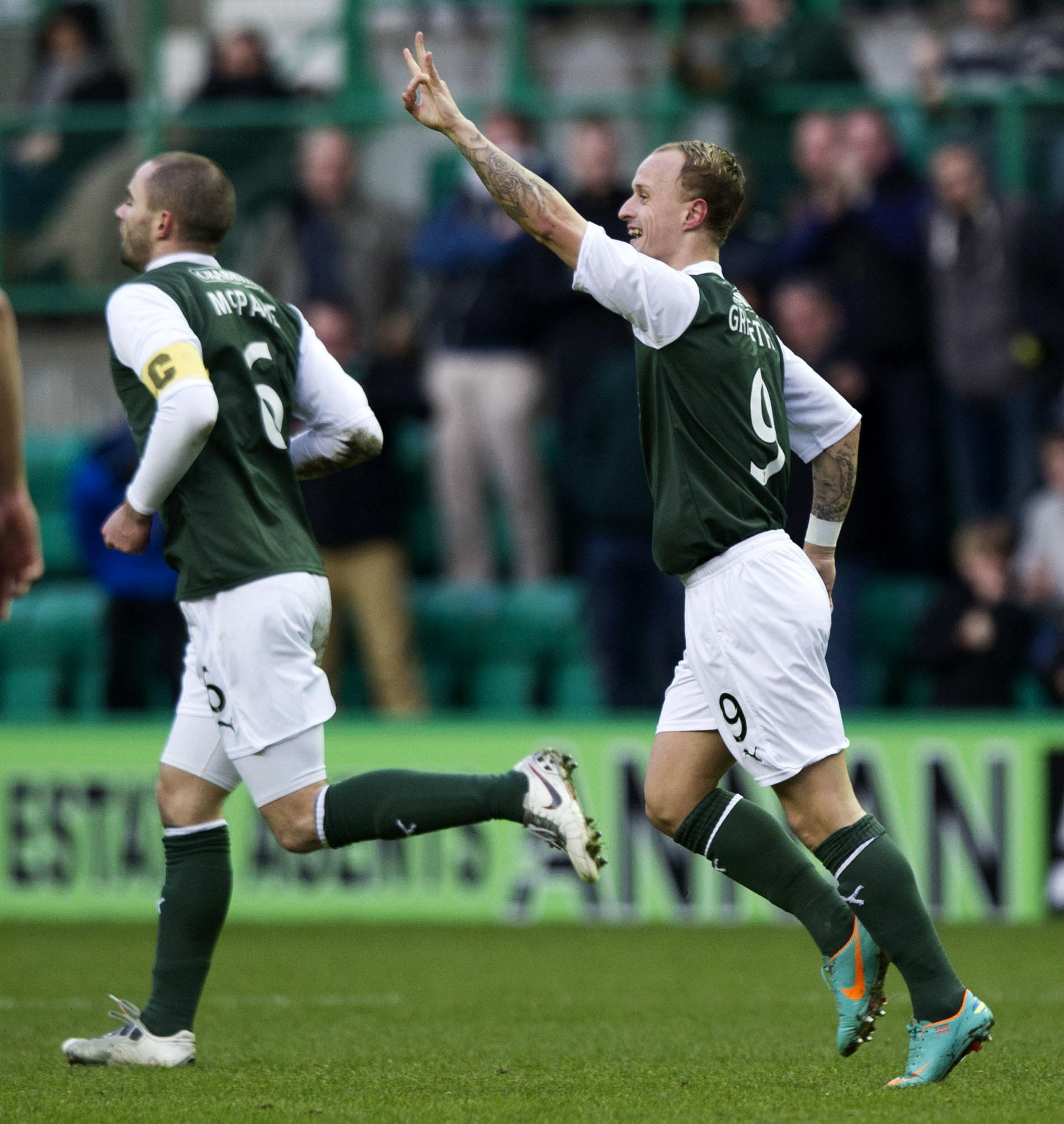 Leigh Griffiths' salutes the home fans after his goal against Celtic. Source: @HibernianFCClub

7' Celtic get a costless kick in a good position after a Hibernian defender handled the ball.

6' Corner kick for Hibernian after some pressure was applied to Ambrose. The set piece brings no trouble to Fraser Forster.

3' Some early trouble inside Celtic's area but the visitors clear the ball out of danger.

1' And we are underway, Celtic start the game in posession.

14:50. Celtic's top goalscorer, Gary Hooper, has managed to score 8 goals in the SPL this season, the same tally as Eoin Doyle, Griffiths' partner up front today for the hosts.

14:46. Among their ranks they have one of the top goalscorers in the SPL, Leigh Griffiths, with 13 goals.

14:43. Hibernian have not won a match for a month. Their last one came against St Johnstone at McDiarmid Park (0-1, with Paul Cairney as the scorer).

14:37. Celtic conceded two goals at Celtic Park to surrender their lead and draw against Hibernian back in September. Lustig scored a brace but his efforts were not enough to give his team the victory.

14:32. These matches have left some good goals and memories for both sets of fans. Here you can see Hooper and Stokes' fine goals. The Irishman will be again missing today, but is closer to full fitness after being on the sidelines during almost the whole season.

14:26. Subs: Murdoch, Wotherspoon, Maybury, Handling, Caldwell, Kuqi, Donaldson. Former Celt David Wotherspoon makes the bench, will he be able to make an impact during the second half?

14:15. Welcome back ladies and gentlemen, Bhoys and girls. I'll be with you to live the twists and turns of this SPL game between Hibernian and Celtic.

Celtic vs Hearts Preview: Both sides looking to maintain momentum 3 years ago

Celtic&nbsp; Season Preview: Hoops aiming for record-equalling nine in a row 3 years ago

Celtic U17 2-1 Rangers U17: 10 man Hoops hold on to win fourth consecutive Glasgow Cup 5 years ago
The weird and wonderful case of Stuart Armstrong 5 years ago

Celtic FC 2016/17 Season Preview: How will Rodgers fare in his new role? 6 years ago

Luck of the Irish the choice in Lawwell&#039;s Lottery? 6 years ago