The season had barely finished before Robin van Persie was off to Rome, immediately igniting rumours of a transfer to Roma or their bitter rivals Lazio. The rumours eventually were extinguished, but the future of the 31-year-old striker still remains a blur.

"It is not up to me. For the moment I am staying here. That is it really. I can’t look into the future. I don’t know what is going to happen after that. We shall have to wait and see", the Dutchman stated to the Guardian.

The former Arsenal captain only managed to score ten times this term, and expressed that both himself and his teammates are responsible for the lack of goals Manchester United have scored over the past ten months. At the end of the day, the Red Devils only managed to find the back of the net 62 times in the Premier League, the lowest amount since 2004/05, when the club celebrated 58 goals over the course of the season. Back then, just as now, Rooney was the top goalscorer, managing 11 successful strikes by linking up with the likes of Ruud van Nistelrooy, Louis Saha and Alan Smith. This term the Scouser scored only three more goals.

United looking for a sale?

For United's part, this summer might be the time to cash in on the man who delivered a scintiliating campaign throughout the title-winning 2012/13 season, as his figures show a worrying decline even from his days at Arsenal. The statistics master Christoffer Johansen (@Bojochris on Twitter) posted this tweet in May, saying "the awkward feeling for Van Persie facing a rough campaign unfortunately turned out pretty accurate", to graphically describing the trend. 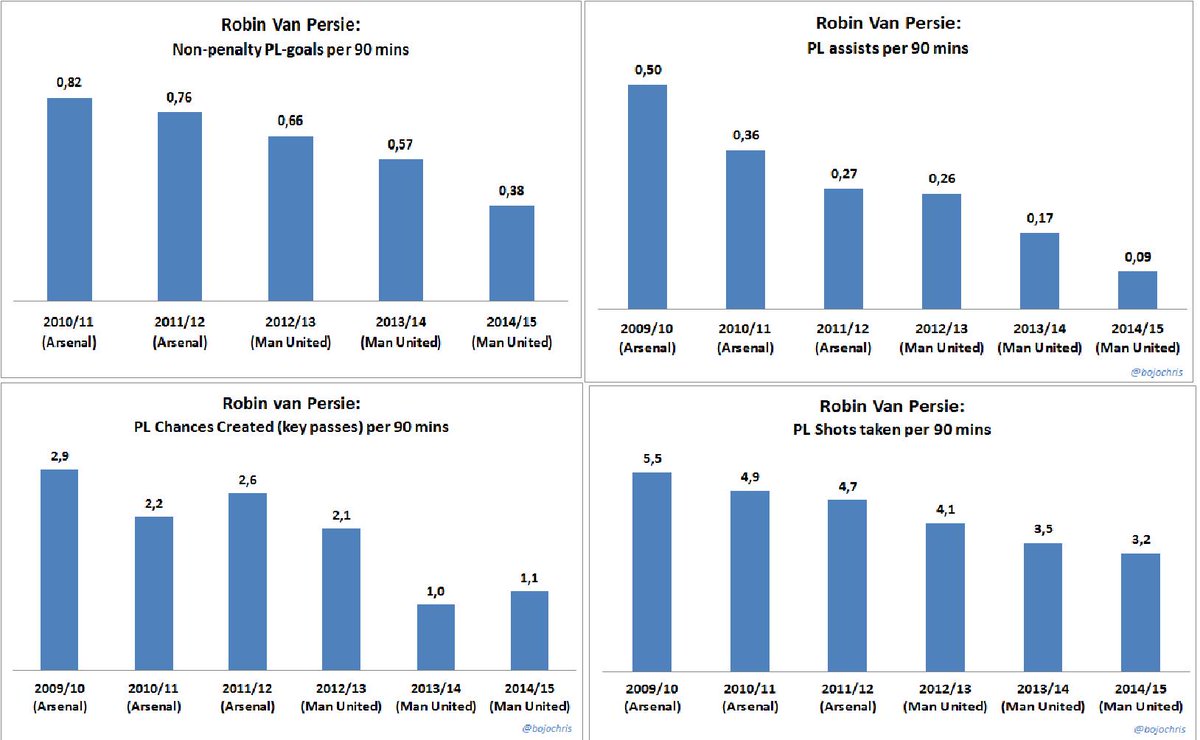 Van Persie has currently one more year to go on his current United deal, and will be able to negotiate with other clubs as a Bosman player from January 2016 unless he pens a new deal at Old Trafford.

Which Man City player would United fans wish to have in their side and vice versa?&nbsp; a day ago

Manchester City vs Manchester United: Team news, ones to watch, predicted line ups and how to watch a day ago

Manchester United have to make up the 'margins' to neighbours City - but how? a day ago

Henderson 'is ready' for Manchester derby, says Solskjaer 3 days ago

Manchester City vs. Manchester United: Four things to look out for ahead of the Manchester derby 3 days ago

The Warmdown: Manchester United play out a goalless draw in South London 4 days ago