Manchester United defender Chris Smalling has been selected in the WhoScored.com Team of the Month after his early performances this season have been solid and assured.

The English centre-back struggled to cement his place in the Man United starting line-up for the first half of last season, in which he was also sent off against rivals Manchester City after just over half an hour.

Smalling in WhoScored team of the month, alongside Ashley Williams

However, Smalling has turned his form around and is consistently improving to defy critics who said he would never make the cut at United. The 158-time capped United man is currently on international duty with England alongside three other United teammates in Luke Shaw, Michael Carrick and Wayne Rooney.

Smalling is in the WhoScored.com Team of the Month in central defence alongside Swansea City defender Ashley Williams, both having an average rating in August of 7.57. 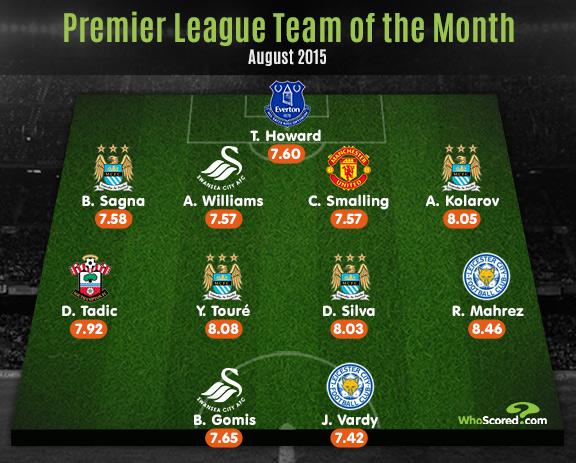 Smalling, 25, arrived at United in 2010 from Fulham and has only begun to make his mark now. He was named in the Premier League Team of the Season for WhoScored in 2014/15 after a great second half of the year and will be hoping to kick on now.

He is the only United player in the side while Manchester City have the most out of any team, having won all of the first four Premier League games. Bacary Sagna, Aleksandar Kolarov, Yaya Toure and David Silva are the four in the side while Williams' teammate Batefembi Gomis, who scored against United in a 2-1 win, is in the striker pairing alongside Jamie Vardy, who is also in the England squad.

In goal is Everton man Tim Howard while Southampton's Dusan Tadic is on the right wing and Leicester City's Riyad Mahrez is on the left flank.

The Warmdown: Man United put in team performance to win in Paris an hour ago