Manchester United won the game 2-1 after Bastian Schweinsteiger scored a late deflected winner. Troy Deeney scored a penalty late on that looked like it was going to earn Watford a point after cancelling out Memphis Depay's early opener.

United started the game on the front foot

The first half started with Manchester United on the front foot from the kickoff, and they created the first half chance of the game when Juan Mata on the overlap played a good ball into the box, but it eluded all of the United attacking players. It was a good start for United in the game as they made sure they started the game on the front foot.

Memphis opened the scoring for United

United's bright start to the game resulted in an early goal from Memphis Depay in the 11th minute when he volleyed home a first-time cross from Ander Herrera. Memphis needed that goal as he has come in for a lot of criticism recently and scoring a goal is the best way to keep the critics quiet.

United started to get overconfident after taking the lead and it almost led to a goal for Watford when Ashley Young gave the ball away in his own half, and Troy Deeney played it to Odion Ighalo who had a shot which went wide. It was a big warning sign for United after a very bright start.

Herrera came off injured in the first half

Herrera, who had made a strong start to the game, had to come off injured after 25 minutes with a hamstring injury, and he was replaced by Marcos Rojo, so it meant a change of system switching from a 4-2-3-1 formation to a 3-5-2 formation.

United came very close to making it two when from a corner when Bastian Schweinsteiger flicked it on, but Deeney managed to clear it just before Schneiderlin was going to tap it in. Morgan Schneiderlin in the first 35 minutes was sensational for United by breaking up the play and starting the team in the attack.

Memphis had United's next chance when he hit a shot from about 30 yards which was well saved by Watford keeper Heurelho Gomes, but Memphis once again showed some positive signs. 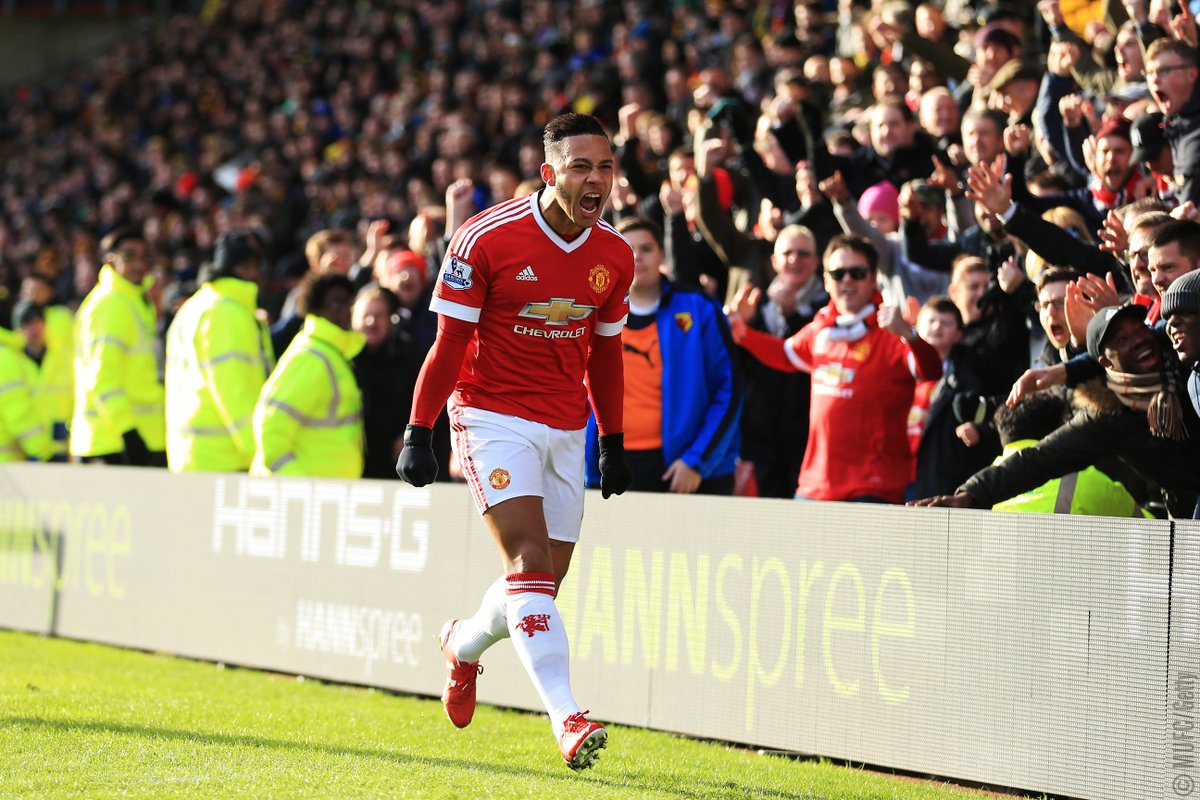 The first half came to end with United leading through Memphis's early goal, and it was probably one of United's best halves of the season, in terms of how fast the tempo they were playing at. Overall, it was a very good half for United, but probably Louis van Gaal will be angry that his side hadn't scored more than the one goal.

United had the first big chance of the second half when Memphis played Jesse Lingard through, but the winger had his shot saved when he probably should have scored. United once again, though, starting the half on the front foot.

United looked fluent in their passing

United played some very fluent football at the start of the second half without creating loads of chances, but they needed to build on this and take this forward as they have shown they can play some decent football.

Watford finally livened up in the second half when Deeney had a shot which stung the palms of David de Gea, who, in the large part, hadn't had very much to do, but Watford started showing signs of attacking the United goal for the first time in the game.

United almost made it two in the 67th minute when Lingard stole the ball from the Watford defence and played it to Mata who in turn played it to Memphis who just dragged his shot wide. United were just trying the take the sting out of the game after a ten-minute spell from Watford were they tried to have a go at the United defence who still hadn't conceded in over ten hours.

De Gea made a fantastic save in the 71st minute from an Amen Abdi shot which everyone in the ground thought was destined to nestle in the back of the net. De Gea once again showed why it was so important that United kept him at the club.

United were hanging on going into the last 15 minutes, and just couldn't keep a hold of the ball, and really needed their experienced players to step up and see out the game, while in the meantime Mata was replaced by Andreas Periera.

Van Gaal, in recent weeks, started to bring more and more youth players into the first team which should repel any news stories that he is abandoning United's youth players. Lingard should have made it two when he was played right through by Daley Blind, but failed to chop the ball over Gomes.

Deeney scored a penalty late on for Watford

Watford were then awarded a penalty in the 86th minute when Rojo brought down Ighalo, and Deeney finished very well to make it 1-1. United paid the price for missing so many chances, which in the Premier League you just cannot do.

United responded and scored a winner in the 90th minute

United then went down the other end and made it 2-1 when Bastian Schweinsteiger bundled it in after Watford failed to clear it from a United corner. United really didn't deserve to be pegged back before that.

United came away from Vicarage Road with the three points after an unbelievable ending, but overall they were the better team during the game, but you have to credit the fight that Watford showed.

Which Man City player would United fans wish to have in their side and vice versa?&nbsp; a day ago

Manchester City vs Manchester United: Team news, ones to watch, predicted line ups and how to watch a day ago

Manchester United have to make up the 'margins' to neighbours City - but how? a day ago

Henderson 'is ready' for Manchester derby, says Solskjaer 3 days ago

Manchester City vs. Manchester United: Four things to look out for ahead of the Manchester derby 3 days ago

The Warmdown: Manchester United play out a goalless draw in South London 4 days ago