After another superb performance between the sticks for Manchester United, experienced midfielder Bastian Schweinsteiger has called David De Gea one of the best in the world.

De Gea made five or six sensational saves to deny Troy Deeney, Amen Abdi and Odion Ighalo in the second half, keeping Man United in the game despite looking the worse side.

The Reds took the lead through Memphis Depay in the eleventh minute, volleying past Heurelho Gomes after an Ander Herrera cross. The first half was pleasing for onlookers, full of quick football and plenty of chances. Yet Watford looked far better after the break and threatened consistently in the second half.

"David De Gea is one of the best goalkeepers in the world," Schweinsteiger told BT Sport in a post-match interview.

The Spaniard almost returned to his home country this summer as Real Madrid circled as soon as the 2014/15 season came to an end. Yet complications and questions over how much the side from the capital wanted him left De Gea in Manchester on deadline day. 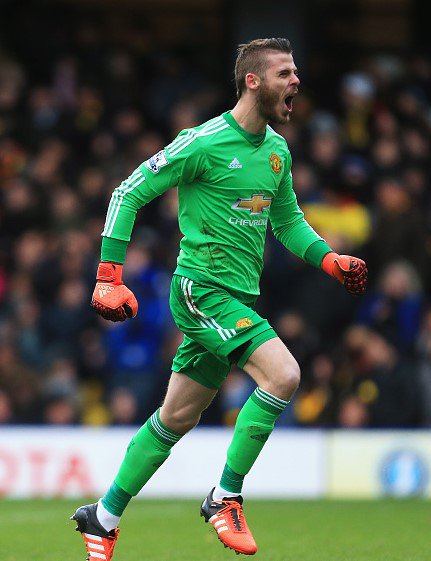 "We are happy that he stayed here," admitted Schweinsteiger, who joined this summer. "He made a lot of good saves and you need a good goalkeeper when you want to win something."

Schweinsteiger caused a late winner, as Troy Deeney slid the ball into his own net after the Germany captain shot across goal, pouncing on Heurelho Gomes' save.

Schweinsteiger will have to wait for his first United goal with it going to Deeney, but he showed huge passion when celebrating the stoppage time winner.

The Reds face PSV Eindhoven on Wednesday night, looking to secure qualification to the knockout stages of the UEFA Champions League.

Henderson 'is ready' for Manchester derby, says Solskjaer 10 hours ago

Manchester City vs. Manchester United: Four things to look out for ahead of the Manchester derby 9 hours ago

The Warmdown: Manchester United play out a goalless draw in South London 2 days ago