The first day of Free Practice in Sachsenring for the Moto3 class, ahead of the ninth round of the season, the GoPro Motorrad Grand Prix Deutchsland, was full of mixed weather, plenty of competition at the top of the timesheets, and spectacular crashes, one of which has saw pole position go-getter, Jorge Martin (Del Conca Gresini Moto3) ruled out of the rest of proceedings.

Overcast start to the German GP

It was overcast for the first session of the weekend, Free Practice 1, but it remained dry meaning that it left plenty of chance for a lot of competition for that well-sought after top spot.

Missing from the meeting in Germany is Niccolo Antonelli (Red Bull KTM Ajo). After suffering a crash during the build-up to the previous round in Assen, the back injury he sustained has left him out of action. Instead, British rider Danny Kent, who recently parted ways with Moto2 team, Kiefer Racing, and who completed a wildcard appearance in Le Mans, will make his return and will replace the veteran rider.

Bastianini strong at the Sachsenring

The favourite to win, on paper, is Enea Bastianini (Estrella Galicia 0,0). The Italian has had a difficult season so far and maybe that will change, as going off last years’ results, he not only secured pole, but he was the highest placed finisher at last years’ race as his other competition that finished ahead of him are not competing for various reasons this year, i.e. promotion to the Moto2 class.

Straight away, Bastianini attempted to set off where he left off last year and lay down the gauntlet with a quick time that saw him go straight to the top of the timesheets when things got underway. He was to face stiff competition throughout however, as many were hungry for that title.

Bastianini was knocked off the top spot by current championship leader, Joan Mir (Leopard Racing); who recently unveiled that he will be joining Team Estrella Galicia 0,0 Marc VDS in the Moto2 next season. Next to inhabit the top spot was British Talent Team rider, John McPhee. He reduced the lap time down to 1:29.619 until he things went a little wrong for him.

Mir took back the top spot just as rookie, Kaito Toba (Honda Team Asia) crashed out of the session at turn two. He needed help up after narrowly being avoided on track by several oncoming riders at the right hand turn.

Moments later McPhee had his spill at turn one of the circuit. The back end of his Honda came round but he experienced a slow crash on a part of the track that was off-camber. Ensuring he emptied his belly-pan on the bike before re-joining, he lifted the front end with the Marshalls to reduce debris, and then got restarted and returned to the pits.

Martin back at his usual top spot

This is when Martin first struck making his way to the top of the timesheets for the first time. He then had to fend off Bo Bendsneyder (Red Bull KTM Ajo) who will unsurprisingly be extra determined after crashing just before the line in Assen and collecting a DNF.

Further challenges from Gabriel Rodrigo (RBA BOE Racing Team) and Fabio Di Giannantonio (Del Conca Gresini Moto2) forced Martin to work harder, challenges that he of course responded to, and eventually, despite being forced to sit up, the Spaniard finished the session on top with a time of 1:27.868.

Canet on top at the start of Free Practice 2

After Motul TT Assen Moto3 winner, Aron Canet set things of during the start of Free Practice 2 and was unable to improve on his own time as everyone began to push, before disaster struck for Canet.

He suffered a huge highside at turn one of the track; as he accelerated out of the turn, possibly pushing harder than usual as he wanted to get past traffic that would potentially hold him up, he was thrown up and over his Honda. He slammed down hard on the tarmac and tumbled suffering what turn out to be a fractured right ankle and head perennial.

The session had to be red-flagged as he was unable to get up to his feet unaided; instead he rolled around on the floor in agony holding his right foot. As a marshall stood over him to help highlight the rider down, the flag was eventually brought out and an ambulance brought on track to retireve the fallen rider who was taken to the medical centre where his injuries were confirmed. Unfortunately it means that Martin is now out of the German GP.

When the session got underway it was Mir who made the biggest impression, once again taking ot the top of the timesheets knocking Canet further down. He was able to improve on his own time later on, but a rain shower hit that left him as the only rider to inhabit the spot during the remainder of the session.

Many of the riders retreated to the pits as the rain continued to fall and the track gradually became damper. Ayumu Sasaki (SIC Racing Team) was caught out at turn one, as was Mir. But where Mir just ran into the gravel and was able to continue on after keeping it upright, the rookie crashed out.

The rain prevented many riders from making any further significant improvements. When combining times from both session, championship leader, Mir remained quickest at the end of the day with his time of 1:27.179 which was less than a second slower than the lap record held by Kent and Brad Binder.

Romano Fenati (Marinelli Rivacold Snipers) was second quickest with his FP2 time, but Martin’s FP1 time was enough to leave him third at the end of the day. Philipp Oettl (Sudmetall Schedl GP Racing) was fourth ahead of Livio Loi (Leopard Racing) who improved in FP2, and Bendsneyder’s FP1 time left him sixth overall.

Nicolo Bulega (Sky Racing Team VR46) was seventh with his FP1 time ahead of Marcos Ramirez (Platinum Bay Real Estate), Bastianini and Canet who completed the top 10 after they went quickest in FP2. 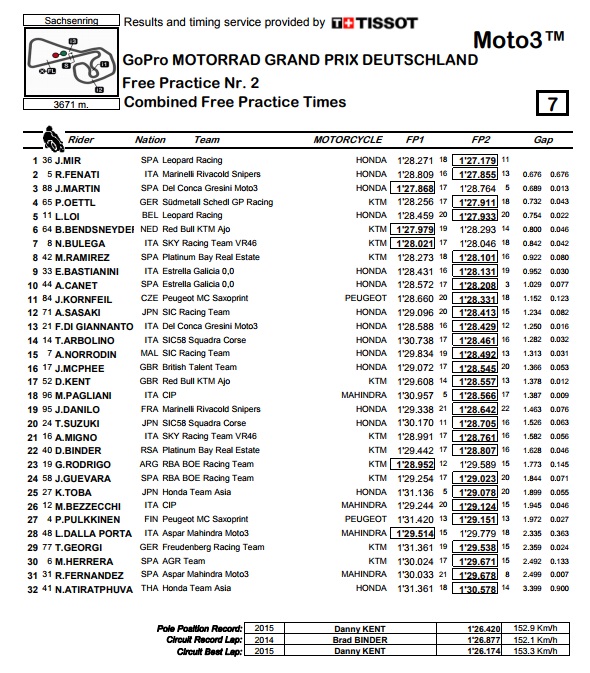 Conditions improved on the second day in time for Free Practice 3 for the Moto3 class. With Martin out of the way, Mir embraced the opportunity to remain on top of the timesheets for most of the session. Both Maria Herrera (AGR Team) and Kent were made aware that they would receive a 12 grid penalty for dawdling on track.

It was not as easy for some however as Bastianini ran on at turn one of the track. He avoided a crash but later he wasn’t to be so lucky. Lorenzo Dalla Porta (Aspar Mahindra Moto3) also got caught out but unfortunately he fell in the gravel. After lifting the front to empty the stones that had gathered in the belly-pan, he was able to eventually return to the pits with his bike.

Managing to lap at a time of 1:27.987 Mir dominated. Within the last 15 minutes, Bastianini fell down at turn one of the track; despite the bike going from under him he tried to stay on his feet but fell to the floor. He threw his hands up in frustration, and with help from the Marshalls was soon able to return to the pits.

Mir improved on his own lap time which reinforced his position on the leaderboard. At one point, he was out on track with his teammate, Loi showing him the best way around the track and to improve his lap time; he managed at one point to bring him up to second.

Turn one catching several out

More riders continued to be caught out at turn one. Both rookie, Toba and Darryn Binder (Platinum Bay Real Estate) both had to turn on at the first turn but got caught out in the gravel. Binder approached at higher speeds whereas Toba was slower and both riders were OK after their small spills.

Mir was able to make further improvements reducing his time down once again but finished only 0.093 seconds ahead of Bendsneyder in second and Loi ended up third. Bulega was forth quickest ahead of Suzuki, Kent, Ramirez, Andrea Migno (Sky Racing Team VR46), Canet and Juanfran Guevara (RBA BOE Racing Team) who completed the top 10.

Mir the favourite for pole on combined times

Combining the times from all three practice sessions, Mir remained on top but it was his FP2 time that gave him the biggest margin over Bendsneyder, Loi and Bulega whose FP3 times were their quickest. Fenati’s FP3 time left him fifth ahead of Suzuki in sixth after FP3. Martin’s FP time left him seventh but with him out of the question, Kent, Oettl, Ramirez and Migno complete the top ten favourites heading into Qualifying.

The Moto3 were first to complete their Qualifying session that started off dry, but was to later be hit by the rain that was expected and dreaded all day. As they settled down to the previous pace in Free Practice 3, Mir, Canet, Tony Arbolino (SIC58 Squadra Corse) and Nicolo Bulega (Sky Racing Team VR46) all challenged for provisional pole early on in the session.

Fenati and Kent had a run in on track. The Italian was fuming as he felt that Kent had spoiled a fast lap for him and gestured to the British wildcard rider. Both ended up dawdling on track further; Fenati wasted a lot of time.

Rain fell with 15 minutes to go

Mir improved once again lapping at 1:26.933. There was plenty of the session left so his pole position was not secure. Binder was on a hot lap but it was spoiled and it resulted in him running off track. Fortunately then for Mir, rain fell and so the riders retreated to the pits hoping it would pass.

Around eight minutes passed by and with around seven minutes to go, the sun was back out and the track appeared dry so many decided to once again try to improve on their Qualifying time. Within minutes, Bendsneyder was able to move up to fifth after completing a personal best in the second sector. Canet completed a personal best lap and progressed up to fourth, and McPhee also began improving on what was provisionally 19th place.

Mir remained in the pits, he was content that he had done enough to secure pole but then in the last minutes his team must have forced him out. He should have done more sooner, a lesson he learned in a harsh way when Canet lapped at 1:26.688 and stole pole from the championship leader.

More riders also improved, but no-one else was able to come close to Canet’s time. McPhee progressed up to ninth, Bulega hopped up to third and Oettl progressed to seventh on home turf.

Canet will start the German Moto3 race from pole position after winning the previous round in Assen. He will be joined on the front row by Joan Mir and Bulega who qualified in second and third respectively.

Marcos Ramirez (Platinum Bay Real Estate) who deserves a podium after his performances so far this season, will start from fourth ahead of Arbolino who has his best Moto3 Qualifying position in third, and Fenati will start from sixth. Oettl is seventh ahead of Bendsneyder and last years’ pole positions man, Bastianini in ninth. McPhee qualified 10th ahead of Guevara and Suzuki; who complete row four.

Riders are set to be penalised ahead of race and grid is to be confirmed. 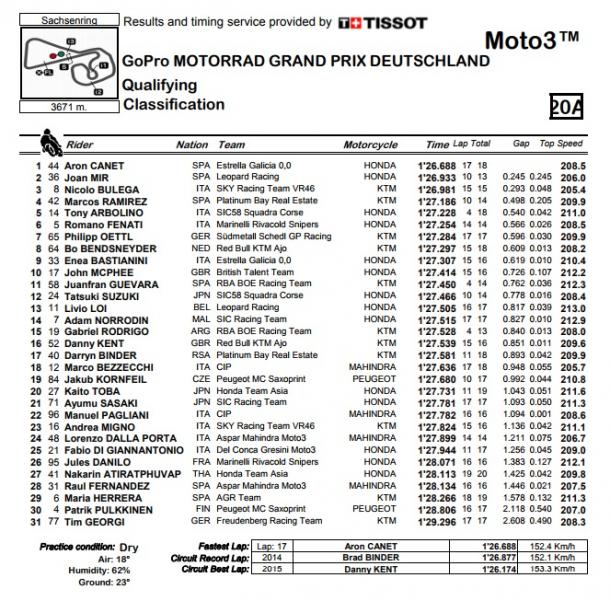 Eifel GP Preview - Who will prevail as F1 returns to Germany? 14 days ago

Bottas on top only constant in reshuffled FP2 - Russian GP a month ago
Restore your password
Please enter your user name or email.
Login Member or Writer Panel
Enjoy your own Customized Newspaperwith VAVEL topics' carousels!