Lewis Hamilton, who started on pole, lead the race from start to finish, breaking multiple records.

The Brit registered the lap record at 1.39.283 as well as beating his personal Championship points tally, going from 408 last season to 412.

The following podium positions were attained by Max Verstappen and Charles Leclerc who were unable to match the sheer pace of the leading Mercedes.

Though the Ferrari of Leclerc claimed the final podium position, he is under investigation by the stewards for fuel irregularities and could face disqualification from the race, which would reward Valtteri Bottas with a podium after he had initially battled his was from the back of the grid to fourth.

As for the race itself, Leclerc overtook Verstappen during the first lap, whilst the Toro Rosso of Pierre Gasly found himself sandwiched between the two Racing Points at turn one, which resulted in the loss of his front wing and combined with a slow pit stop, the Frenchman was in 20th after starting the race in 11th by the end of the first lap.

Drivers had a tough time overtaking as DRS wasn’t enabled until the 18th lap due to a technical issue, but once it had been introduced, Verstappen was able to regain his second place from Leclerc on lap 32, and after a bit of wheel-to-wheel action, the Dutchman got away from the Monegasque.

Bottas, who had started the race from the back of the grid, managed to fight his way to fourth place and tightly contest Leclerc for third right up until the chequered flag, however the Ferrari driver will be under investigation following the race due to a fuel irregularity.

Sainz clinches sixth in the championship

Carlos Sainz edged Gasly and Alexander Albon to sixth place in the championship after squeezing into the top ten on the final lap to recieve a decisive point.

The Spaniard was forced into a late pit-stop and had to battle his way back into the points positions and did so on the final lap after overtaking Nico Hulkenberg, in what may turn out to be the German's final race in Formula 1.

The McLaren of Lando Norris had been holding off Sergio Perez’ Racing Point, but the Mexican was able to overtake the young British driver to secure seventh place.

Renault, despite receiving no points in Abu Dhabi, have finished ahead of Toro Rosso in the championship, with Daniil Kvyat's late charge into ninth position not enough to climb to fifth in the 2019 standings. 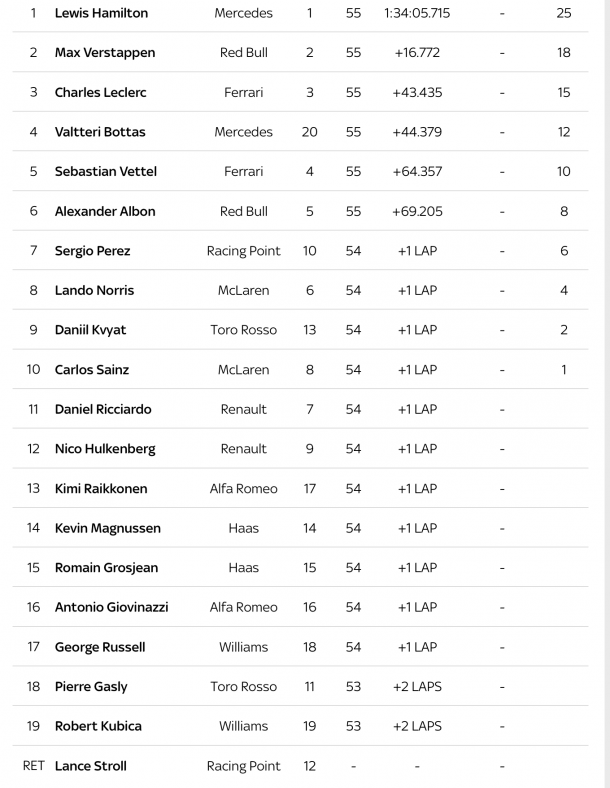 Valtteri Bottas has the edge after FP3 in Monza22 days ago