When Cody Rhodes first entered World Wrestling Entertainment back in 2007 he soon made a big impact, becoming a part of one of the most feared stables within the company and fans have been screaming for a return to his origins ever since his Starduct gimmick ascended to infinity and beyond.

Teaming with Ted Diabiase Jr and Randy Orton, the three men became known as The Legacy thanks to their famous wrestling fathers, and in fitting with their rich family history had a fair level of success including a World Tag Team Championship run.

Success when the group disbanded came few and far between for Rhodes with the former three time Ohio Valley Wrestling champ struggling to make a strong identity for himself, and was often paired with other mid-carders such as Drew Mcintyre and his real-life brother Goldust with the latter the more memorable as he picked up the 2013 Tag Team of the Year Slammy Award but now three years later and a lone star in the sky, the nine-year main roster veteran is struggling to create any waves at all.

If one man could do with a shake-up in creative in this supposed "new era" in the world of sports entertainment, the winner of "Worst Gimmick 2015" as awarded by the Wrestling Observer Newsletter; Stardust, would be a strong contender. Behind the face paint potentially lies a strong character, but while he still portrays his cosmic costume, connection within the WWE Universe has been poor, but is the 30-year-old finally ready to wipe away the makeup?

A wrestler's social media, is something that is often used to promote their own current gimmick, Kevin Owens is almost an expert in this field with his responses to trolls, putting them firmly in their place, Stardust has also tried to repeat this with his fan interaction often of the strange or alien nature, this helps keep his identity firmly intact.

Okay, Kayfabe is dead. Nobody actually believes the UnderTaker is really the deadman, or that the Vaudevillians are obsessed with the yesteryear but few superstars can live up to the level of discipline that Rhodes has endured with his cosmic persona over the past two years, even wearing his full costume to several outings at meet-and-greet events and changing his personality to suit the occasion.

The layers of Dusty Rhodes' second eldest son have slowly begun to tear away and the real wrestler, is beginning to reveal himself from the darkness, and Stardust may be soon a distant memory. 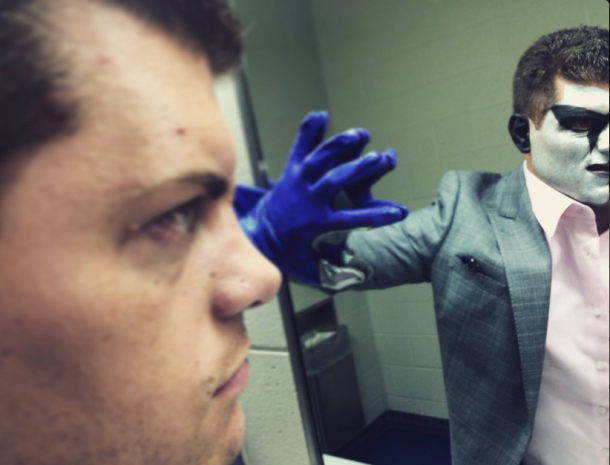 A cryptic tweet from the official Twitter page of the former Georgia State wrestling champion has hinted at a possible return to his former self. With his face painted half in his current gimmick and half untouched it may be that Rhodes is struggling to choose between taking the plunge or staying in his current role.

With the lyrical quote paired alongside the photo, it may serve as a poetic ending to a persona that was always doomed to fail, the words "When I come around" will hopefully build anticipation from the WWE Universe, that could push the Czar of Cosmos towards an epic return to Cody Rhodes; a proven veteran with plenty of years left to give to the company where he can hopefully shoot for the stars.

June 16, 2014, The Debut: on an Episode of Monday Night Raw, a new character appeared on WWE television, by the name of Stardust, a reference to his father's legacy as he once went by this name during his days in NWA. Looking and even acting similar to his brother Goldust, the two teamed together defeating the partnership of Ryback and Curtis Axel, leading to a title match against The Uso's.

April 6, 2015, The Call: John Cena's United States Championship open challenge was answered, and Stardust stepped up to the plate. Although he failed to win, he put on an impressive showing against the face of the company, inevitably sending his stock on a rise (to the stars) and let those backstage know he was capable of performing at the big time.

May 25, 2015, The Supervillian: Stardust entered an eye-opening feud against Marvel TV Show star Stephen Amell, who stars in The Arrow. The two engaged in one of the battles later in the year, as the TV character alongside Neville squared off against King Barrett and The Monarch of the Milkyway, in a winning effort as The Red Arrow pinned Barrett, but Rhode's profile still rose as he created much hype around this match and did not fail to deliver.

April 6, 2016, WrestleMania Moment: One year to the day since he unsuccessfully challenged Cena for the US title, the two-time prince of dark matter was involved in another championship match, this time on the grandest stage of them all. WrestleMania 32, in front of more than 100,000 fans, Stardust fought Kevin Owens, Sami Zayn, The Miz, Dolph Ziggler, Sin Cara and Zack Ryder for the Intercontinental Title where although he lost, he was involved in one of the best matches on the card and added a further element and layer of the seven-way battle