Thank you for listening to this basketball game at the Olympics. Stay tuned because soon the other games will start broadcasting here on VAVEL. Have a good night and see you next time!
10:41 PM2 months ago

In the two-point conversion, Slovenia was in the show, getting 68% right, against 48% from Germany. In three-pointers Slovenia made 43%, against 32% of the Germans. And Dragic was outstanding, with 27 points, against Germany's best, Lo, who scored only 11.
10:38 PM2 months ago

With a great performance by Dragic, Slovenia scores 94-70 in Germany and goes to the semifinals of basketball at the Olympics!
10:37 PM2 months ago

The ball is in play once again and Slovenia is the one who starts with the ball!
10:18 PM2 months ago

And we have the end of the third quarter with two free throw hits for Germany, with Wagner. After that Doncic hit his two free throws. Finally Saboiu scored two points to close the quarter 66-54 for Slovenia.
10:12 PM2 months ago

Dragic recovers a ball that seemed lost and makes a BEAUTIFUL basket! Slovenia 62 to 50 Spain!
10:06 PM2 months ago

After a little confusion, Germany had free throws to shoot and reached 47 points, but Slovenia leads with 56.
10:00 PM2 months ago

And the match already starts hot. Slovenia had a basket for two and another free throw for an unsportsmanlike act - a swear word to be exact - by Lo on the court. 48-37.
9:53 PM2 months ago

The ball is in play once again, and it starts with possession for Slovenia!
9:52 PM2 months ago

Players on the court

The players from Slovenia and Germany are already on the court once again to start the third quarter.
9:39 PM2 months ago

And the second quarter ends and we go to halftime of the match! At the end Dragic hit a beautiful three-ball to make it 44-37 for Slovenia!
9:35 PM2 months ago

After this good moment of Germany, Slovenia has already imposed its rhythm again, with many baskets of two and leading 41 to 34.
9:31 PM2 months ago

Lo turned the game around but Tobey hit a beautiful three ball and turned it around once again! Now after a Doncic tray we have 36-32!
9:28 PM2 months ago

The three points are the way! Lo makes another beautiful three-point basket and drops it to 31-29!
9:25 PM2 months ago

And the ball already flies into the second quarter, with Germany going on top, but seeing Slovenia add two points with a tray by Dimec! 27 to 14!
9:21 PM2 months ago

Now we go to the first break in the game after the end of the first quarter, with Slovenia winning 25-14. Dragic is the main highlight of the game, with nine points. For the German side Giffey has scored eight points so far. Remember that in the quarter in basketball the time starts with 10 minutes and goes decreasing.
9:11 PM2 months ago

Slovenia 23 x 12 Germany.
Dragic is off to a great start, scoring two more points on a beautiful tray!
9:07 PM2 months ago

Germany relies on three-point shooting, while Slovenia infiltrates through the middle with quality At the moment we have Slovenia 13-10 Germany.
9:03 PM2 months ago

The first two points of the match go to Doncic. After that Cancar sinks the net with a dunk! 4-0 to Slovenia!
9:01 PM2 months ago

The ball is in play and who starts with possession of it after the dispute over the top in the middle is Slovenia!
9:00 PM2 months ago

The starting lineups are as follows.

Ademir Zurapovic will be the referee in charge of the match.
8:55 PM2 months ago

Now the national anthems of Germany and Slovenia, in that order, are played on the court.
8:53 PM2 months ago

The first team to take the court is Germany! Next up is Slovenia!
8:38 PM2 months ago

The Slovenian team are ready to the finals! 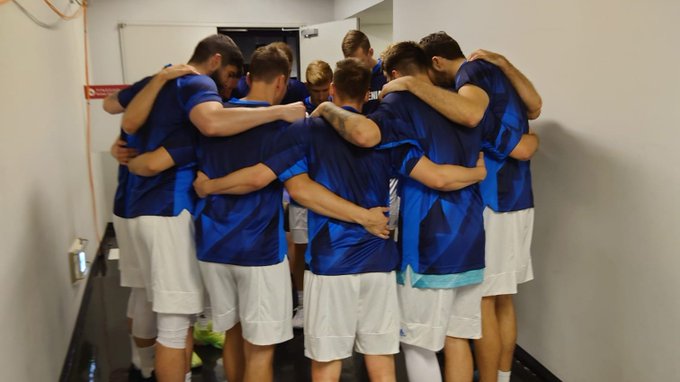 A little of the warm-up of Slovenia now! 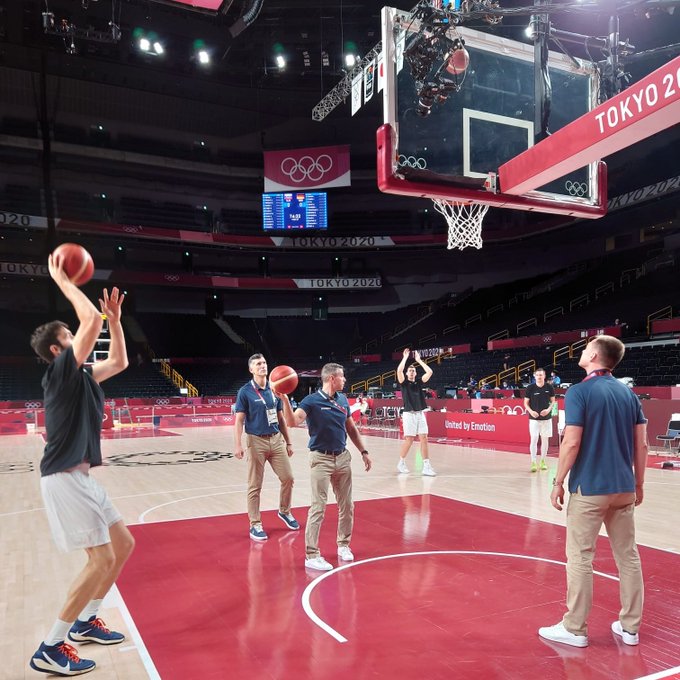 While we don't officially have the starting lineups, let's go to the squads. Starting with the Slovenian, the call-ups are Dragic, Blazic, Tobey, Cancar, Prepelic, Doncic, Nikolic, Cebasek, Rupnik, Hrovat, Dimec, and Muric.
8:14 PM2 months ago

Now begins the broadcast of the quarterfinal match between Slovenia and Germany in the Basketball Olympics!
12:48 AM2 months ago

Do not miss a detail of the match with the live updates and commentaries of VAVEL. Follow along with us all the details, commentaries, analysis and lineups for this Slovenia vs Germany match.
12:43 AM2 months ago

How to watch Slovenia vs Germany Live in TV and Stream

If you want to watch the game Slovenia vs Germany live on TV, your options is: Peacock.

If you want to directly stream it: Streaming services and NBC Olympics app.

Germany, on the other hand, qualified third in its group with four points, with one win and two losses. The leader was Australia, with three wins and six points. Italy came second with five points from three matches, with two wins and one loss. Nigeria scored three points, with three losses.
12:18 AM2 months ago

Welcome to VAVEL.com’s coverage of the 2020 Tokyo Olympicsmatch: Slovenia vs Germany Live Score!