Thank you for following the rebroadcast of the UFC fight between Font and Vera.
10:19 PMa month ago

Chito Vera of Ecuador defeated Font of the United States by unanimous decision on the scorecards.
10:09 PMa month ago

Knowing he won the fight by the three knockdowns, Vera took control of the fight and withstood the onslaught of Font, who threw many punches but not very accurate and forceful. It will go to the scorecards.
10:04 PMa month ago

Font seemed to have recovered, but again Vera with a right kick sent him to the canvas and, once again, Font held his ground to avoid going down by submission.
9:59 PMa month ago

Font now got a little nervous at the end of the final period, with Vera taking the baton, although he was unable to generate enough damage to put his opponent down again.

In the final stretch Vera once again knocked down Font and was saved again by the buzzer when the knockout seemed imminent.

Vera is not keeping his guard up and while he is looking to generate damage with his feet, Font has taken advantage of it by dropping punches down the middle and to the face, including a knee that sent him reeling.

In the end, Chito sent Font to the canvas and, to his credit, time ran out to survive the period.

Vera started with a lot of intensity and kicking that generated damage, however, Font was recovering and with a couple of forehand shots managed to cut the advantage to put him under incessant pressure.
9:44 PMa month ago

The fight between Vera and Font begins.
9:39 PMa month ago

While Font, the UFC's fifth-best fighter, is already listed as we speak.
9:34 PMa month ago

The first to take the stage is the Ecuadorian Vera in search of the triumph.
9:29 PMa month ago

Now, yes, the Ecuadorian Vera will step into the cage to fight the expected fight against the American Font.
9:24 PMa month ago

The fight was stopped in the first minute by a headbutt from Collier to Arlovski, although the referee asked them to stop doing that. After that, none of them could impose conditions and the decision will be given by the judges.
9:14 PMa month ago

Collier tries to be more offensive, but it was a very cautious period during the first minutes of the two compared to the first.
9:09 PMa month ago

Collier with more force and decision in these first minutes, taking the baton of the fight and, in fact, Arlovski was cut near the eye.
9:04 PMa month ago

In less than a minute

The night's co-feature fight will feature Andrei Arlovski taking on Jake Collier, just before Font vs Vera.
8:54 PMa month ago

Brito threw the right hand that sent Fili to the canvas and there he did not forgive him and finished him until the referee ended the fight. Great victory for the Brazilian.
8:49 PMa month ago

The next bout to take place will be that of American Andre Filivs against Brazilian Joanderson Brito.
8:44 PMa month ago

The first 3 fights of this card have already been contested and have yielded the following results:

These are the following May UFC events:

The fight between Gordon and Grant is already underway:

In approximately one hour the stellar fight between Font and Vera will take place and, of course, we will bring you all the details:

In an interview with Fox Sports, Vera assured that he would go all out in search of the victory that would consolidate him as one of the best in his weight class:

This is how Gordon and Dawson are warming up before their fight.

Gordon vs Dawson is LIVE and FREE NEXT on @espn! #UFCVegas53 pic.twitter.com/LyJugRuPLM

While Vera, a little more smiling, has made her arrival.

Vera has arrived to the APEX! #UFCVegas53 pic.twitter.com/CfjGB9pVlO

Accompanied by his partner, Font arrived at the Las Vegas venue a few moments ago:

Font has arrived to the APEX! #UFCVegas53 pic.twitter.com/6P2KWnxUa8

Usually they are Brazilians and there has even been a Mexican, but today Vera wants to make history by putting the name of Ecuador at the top of the UFC.
7:59 PMa month ago

Great show once again from Las Vegas as Marlon Vera looks to pull out the win in his first primetime bout against Rob Font. We begin with VAVEL's coverage of the show.
7:54 PMa month ago

Do not miss a detail of the match with the live updates and commentaries of VAVEL. Follow along with us all the details, commentaries, analysis and lineups for this Rob Font vs Marlon “Chito” Vera match for the UFC Vegas 53 2022.
7:49 PMa month ago

This is the start time of the game Rob Font vs Marlon “Chito” Vera of April 30th in several countries:

A total of six fights will take place in the final round, where the clash between Font and Vera obviously stands out: 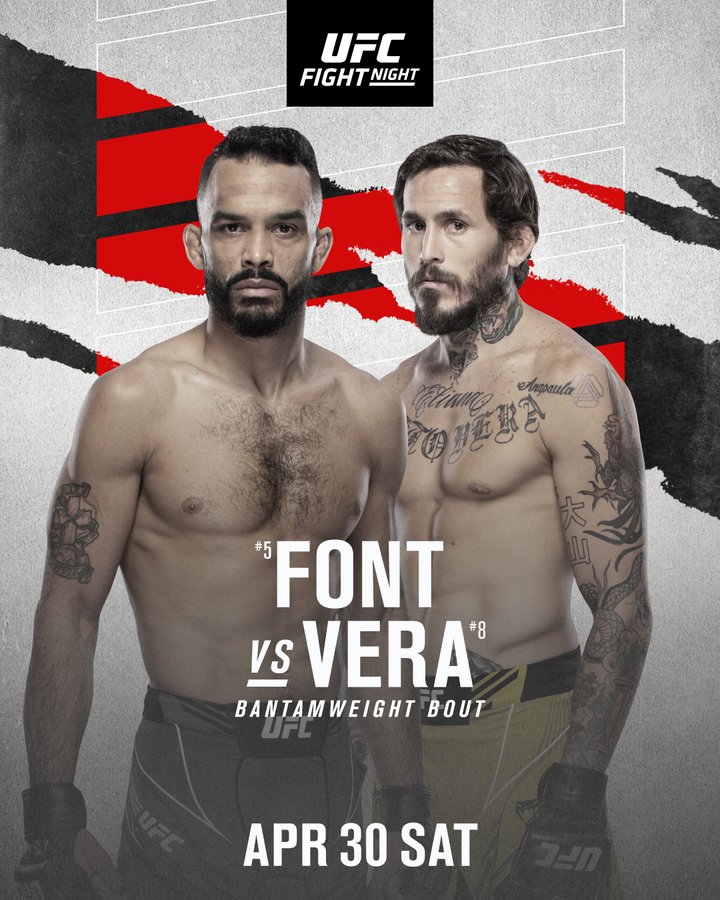 These are the bouts that will be part of the preliminary card in Las Vegas:

It was worth it

Vera commented in an exclusive interview with Marca Claro that at the beginning nobody bet on him, but with effort and dedication he managed to take the step and now he is one of the best fighters in the bantamweight category.

"I feel good, I'm ready, on Saturday I'm going to go all out. It was difficult, it was a hard road, but hard roads make you stronger and I feel happy because I was able to survive it and that motivated me to move forward," he said.

While the Ecuadorian Marlon Vera wants to leave high his country and Latin Americans, emphasizing that he has 27 fights in the UFC with 18 wins, only 7 by knockout, plus seven losses. It is worth mentioning that he will be the first Ecuadorian who will be in a UFC main event fight.
7:24 PMa month ago

The 34-year-old, Rob Font, American has a long experience in the cages with a record of 19 wins and only five losses, 42 percent of them by knockout.
7:19 PMa month ago

The Rob Font vs Marlon “Chito” Vera match will be played at the UFC Apex, in Nevada, United States. The kick-off is scheduled at 8:30 pm ET.
7:14 PMa month ago