One of the main traditions in sports has been the ‘rookie duties’, where the first year players are assigned a team veteran, and have to do everything they say for that whole season. Doesn’t matter if the rookies are the best prospects since LeBron James, they are forced to do their duties.

That has been the case with Zion Williamson this year, and aside from having to bring Chick Fil’A to every team flight, he was forced by the 35 year old JJ Redick to pull up to his podcast with The Ringer.

The half an hour interview was basically to talk about some of the experiences he’s had in his first couple of months in the NBA. The current No. 1 overall pick also revealed some shocking news, stating that he was really close from staying at Duke University for his sophomore year.

‘’I was thinking of staying at Duke until the deadline when I had to declare. I wanted to go back, nobody ever believes me, I felt like the NBA wasn’t going nowhere, and I just loved my experience at Duke that much.’’

The Blue Devils had three top prospects in last year’s squad (Zion, RJ Barrett & Cam Reddish) but still failed to win the 2019 NCAA Tournament, as they lost to Michigan State in the Elite 8 round. 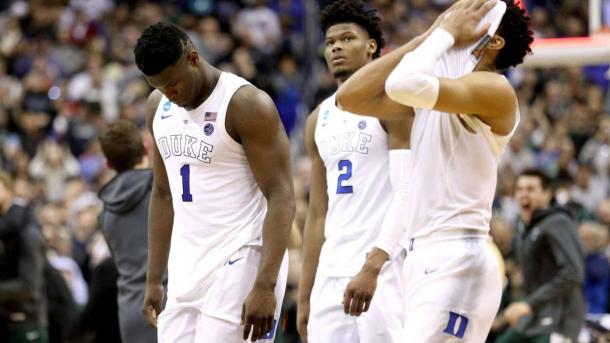 Williamson addressed Duke’s coach, Mike Krzyzewski, who would’ve not allowed him to stay at Durham for another year, considering he was the best prospect out of the entire class.

‘’It was one of those things like, Coach K is not gonna let me come back because he wants me to do what’s best for me and the family. Also some of my teammates told me that it would be cool if I came back, but at the same time they knew I was gonna be leaving too much on the line.’’