They played in the Southern Conference and finished a respectable 4-4 against conference foes. However, they lost their four non-conference games and finished 4-8 on the season. One positive to take out of 2013 was they lost four games by seven points or less and all their wins were by at least 10 points.

Here is the 2013 schedule played by the Mountaineers:

The Mountaineers do have plenty of experience coming back on offensive to help ease the transition a bit. There are a total of nine starters expected back. Junior quarterback Kameron Bryant usurped Jamal Londry-Jackson in 2013 after three games and made the most of his opportunity. He threw for 2,713 yards with a completion percentage of 71.2. He threw 14 touchdown passes and only four interceptions while adding another 158 yards on the ground and three touchdowns.

Appalachian State returns their top three leading rushers, which included Bryant at number three. Marcus Cox had 1,250 yards and 15 touchdowns last year while his backup Ricky Fergerson had 215 yards rushing. Cox also had the ability to catch out of the backfield. He caught 43 passes for 559 yards and six touchdowns. Cox was only a freshman last year and won the Southern Conference Player of the Year for his contributions. Cox will be a big help as the Mountaineers look to develop their receivers.

The weak spot for the Mountaineers on offense may be at wide receiver. They lose their top two receivers in Tony Washington (64 receptions, 939 yards, and 4 touchdowns) and Andrew Peacock (78 receptions, 706 yards, and 2 touchdowns). However, they do return Tacoi Sumler who was at Oregon before transferring. Sumler was injured last year. There is also other experienced receivers such as Malachi Jones (31 catches for 293 yards), Simms McElfresh (20 catches for 269 yards and 2 touchdowns), and tight end Barrett Burns (22 catches for 205 yards and 1 touchdown).

The entire starting offensive line is expected back for Appalachian State which is great news for them. Four Seniors and a Junior will be on the line led by center Graham Fisher. These guys will be expected to give as much time to Kameron Bryant as possible and open up big holes for Marcus Cox. This is the strength of the team.

The weakness for Appalachian State appears to be on the defensive side of the ball. They return only six starters from 2013, but have a nice mix of younger and older players. The Mountaineers play a 3-4 style of defense and have two starters returning on the defensive line. Their "new" starter on the line is has seen action before. That is Ronald Blair who missed all of 2013 with an injury. Blair garnered all conference attention in 2012 when he had 60 total tackles, 8.5 tackles-for-loss, and 3 sacks. The line will need to make an impact to help out the back eight.

The linebacker group returns two starters in Sophomores Rashaad Townes and John Law. Law is the more influential of the two as he recorded 71 tackles last year including one sack and three interceptions. He will have to help fellow linebackers Brandon McGowan and Keenan Gilchrist learn the ins and outs of the playing the position as leading tackler Karl Anderson (113 tackles) is gone.

The secondary is also replacing two starters. One of the losses was the second leading tackler in Alex Gray (73 tackles), but there is plenty of game experience here as well. Doug Middleton returns at costless safety as does Joel Ross at one of the cornerback positions. Kevin Walton is projected to play strong safety and he played in all 12 games last year, recording 56 tackles. Junior College transfer Jordan Ford is expected to take the other cornerback spot.

Zach Matics will be the new kicker for Appalachian State. He was the kickoff specialist in 2013 and he recorded 21 touchbacks on 55 kickoffs. Returning at punter will be Bentlee Critcher. He had an average of 45.9 yards per punt and only one was blocked. He may be key to helping flip the field position.

There is no doubt that 2014 will be a struggle for head coach Scott Satterfield as he takes his team into a schedule against ten FBS teams and two FCS teams. They will play six games on the road as well as six home games. Appalachian State will begin their season on the road in the Big House on August 30. Yes, they did pull one of the biggest upsets back in 2007 but that was a different time for both programs. The season will end for Appalachian State on November 29. Their schedule is below. 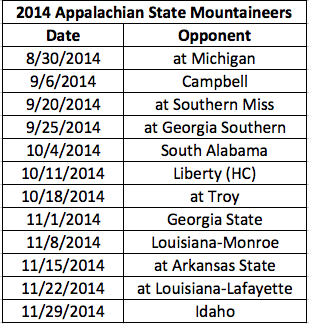 Overall, it appears that the Mountaineers can grab a few wins this season with their best chances being against Campbell, Liberty, Georgia State, and perhaps Idaho. The step up in competition will be noticeable as the Mountaineers may not reach last year's win total of four. The offense will be good, but the key is on defense. If Appalachian State's defense can play up to an FBS level for 12 games, they could reach 5 or 6 wins. 2014 will be a good stepping stone for the Mountaineers as they begin their FBS journey.