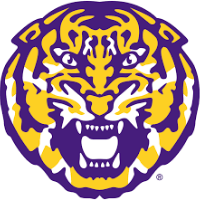 It's official! The storybook, dream season for the number one LSU Tigers are complete, going 15-0 to dethrone the defending national champions Clemson Tigers and win the 2020 College Football Playoff National Championship Game 42-25 to win their first national championship title since 2007 almost at home in their home state in the Mercedes-Benz Superdome in New Orleans, Louisiana behind Heisman Trophy-winning quarterback Joe Burrow and head coach Ed Orgeron.
1:12 AM8 months ago

Big hit from LSU star safety Grant Delpit on Clemson quarterback Trevor Lawrence forces him to lose the ball and fumble it.
12:42 AM8 months ago

LSU may have just landed the knockout punch on Clemson with a brilliant 24-yard touchdown pass, a dime from QB Joe Burrow to wide receiver Terrace Marshall Jr. to stretch the lead!
12:35 AM8 months ago
That's the end of the third quarter here in New Orleans, Louisiana with LSU leading Clemson 35-25. Fourth quarter from the Mercedes-Benz Superdome coming up next.
12:32 AM8 months ago

Star wide receiver Tee Higgins has returned to the game from the locker room for Clemson.

Big play for LSU to get a much-needed touchdown on a four-yard Burrow pass to tight end Thaddeus Moss to extend the lead.
12:14 AM8 months ago

Massive, controversial targeting call on Clemson's leading linebacker James Skalski results in a 15-yard penalty and Skalski's ejection, a huge loss for Clemson.
12:13 AM8 months ago

Clemson star wide receiver Tee Higgins has left the field and gone to the locker room after a hard hit on a catch by an LSU defender.
11:52 PM8 months ago

Some costly penalties from LSU and smart play-calling from Clemson results in a very important touchdown drive led by running back Travis Etienne who punches it in three yards on a running touchdown.

Clemson elects to go for two and Trevor Lawrence passes it to Amari Rodgers for the two-point conversion to bring it to a three point game!

Safety Grant Delpit is in the game to start the second half.
11:38 PM8 months ago

ESPN's Tom Rinaldi reports that star safety Grant Delpit left the game and went to the locker room midway through the first half and has not returned since.
11:39 PM8 months ago
The second half is underway and LSU receives the ball and begins on offense!
11:14 PM8 months ago
That concludes the first half of football here in the College Football Playoff National Championship Game in New Orleans, Louisiana!

LSU will receive the ball first to start the next half.

Massive response again from LSU on a crucial end-of-half drive as QB Joe Burrow runs it to get the first down before hanging in to throw a six-yard touchdown to Thaddeus Moss.
10:52 PM8 months ago

LSU takes the lead off a great route from WR Ja'Marr Chase for a 14-yard touchdown pass from Burrow! York's PAT is good.
10:36 PM8 months ago

LSU comes up clutch with a huge third-down conversion in the red zone, letting QB Joe Burrow keep it on the quarterback run for a three-yard touchdown! Kicker Cade York slides the extra point in.
10:27 PM8 months ago

Perfectly-executed trick play from running back CJ Dixon on a run tossing to wide receiver Tee Higgins for a huge 36-yard touchdown! QB Trevor Lawrence threw a nice block to allow the play to set up.
10:20 PM8 months ago

Big leg shown from Clemson kicker BT Potter to squeeze it in 52 yards for a field goal to re-gain the lead.
10:19 PM8 months ago
That's the end of the first quarter here in New Orleans, with Clemson and LSU tied at 7-7.

Quarter two from the Mercedes-Benz Superdome coming up next.

MASSIVE response from LSU to get on the board with a huge 52-yard bullet from Joe Burrow to wide receiver Ja'Marr Chase for a touchdown to tie!
10:18 PM8 months ago

Even worse crowd than expected for Clemson, LSU dominating in a virtual home game!

The stadium has already filled in. Confident calling the crowd 75-25 LSU. And it's loud.

8:32 PM8 months ago
Another interesting factor in this game will be the two coaches. Both the Bayou Bengals' Ed Oregon and Clemson's Dabo Swinney are uniquely themselves and own energetic, gregarious, fun personalities that their teams emulate.
8:31 PM8 months ago

The Scene is Set pic.twitter.com/BJFC3R8Pci

This Place Will Be Rocking Monday pic.twitter.com/tVlvHhuPbI

#ALLIN at the #NationalChampionship pic.twitter.com/ULWQpSxsUG

The POWER of the PAW #ClemsonFamily, don't take this for granted — these are special times! Tonight, we play in our fourth #NationalChampionship in the last five years!

🐅 What a time to be a Tiger! 🐾#ALLIN pic.twitter.com/ujMPOHzWrn

Only one more sleep until the National Championship.

It's been a season of destiny so far for the top-ranked LSU Tigers and head coach Ed Orgeron's squad will look to finish it off in storybook fashion at home in Louisiana. The LSU offense has been revolutionized under offensive coordinator Steve Ensminger, who has lived through remarkable tragedy with the passing of his daughter-in-law Carley McCord in a plane crash in Lafayette, Louisiana hours before their semifinal on the way to Atlanta, and New Orleans Saints guru Joe Brady, LSU's passing game coordinator.

The Tigers dominated their semifinal against the number four Oklahoma Sooners in the College Football Playoff Semifinal at the Chick-Fil-A Peach Bowl at Mercedes-Benz Stadium in Atlanta, Georgia and have been that flashy and impressive all season. The health of dynamic and versatile running back Clyde Edwards-Helaire should be followed as he sustained a hamstring injury on a non-contact play in practice leading up to the semifinal and was rarely used in the blowout of OU, but it's unclear whether that was because of the dominant LSU lead or physical issues.

LSU's defense has improved over the season and their own guru defensive coordinator Dave Aranda could cause Clemson fits. Watch out for linebacker K'Lavon Chaisson as a possible game-changer with his athletic play all over the field.

Clemson comes into the national championship with an uber-confident team that has not lost in over two years, truly knowing how to win the biggest games, and most importantly not knowing how to lose. Head coach Dabo Swinney and vaunted defensive coordinator Brent Venables have been nearly unstoppable in big games and will look to continue that in this game to win their third national championship in four years.

Following a hard-fought, gutsy win over number two Ohio State Buckeyes two weeks ago in the College Football Playoff Semifinal at the PlayStation Fiesta Bowl at State Farm Stadium in Glendale, Arizona, Clemson will look to continue their gutsy play in the biggest games with another big performance from Trevor Lawrence and Travis Etienne, who's respective surprise running and passing performances changed the game for Clemson.

Two x-factors for Clemson could be the health of star wide receivers Tee Higgins and Justyn Ross who were both banged up in the semifinal, and the performance of safety K'Von Wallace who enjoyed a big game in last year's national championship win over Alabama at Levi's Stadium in Santa Clara.

The 2019 college football season culminates in 2020 with the crowning of a national champion at the 2020 College Football Playoff National Championship Game at the Mercedes-Benz Superdome in New Orleans, Louisiana between the number three defending national champions Clemson Tigers of the ACC and the number one LSU Tigers  of the SEC.

LSU comes into New Orleans with a massive home-field advantage just down the road an hour from their campus in Baton Rouge, Louisiana and with good vibes in their home state in the Superdome, having won all three of their national championship titles, including their two most recent in 2003 and 2007, inside the Superdome in NOLA. Clemson's star running back Travis Etienne has a home-field advantage as well as he grew up two hours from New Orleans in Jennings, Louisiana, making this a huge night for him.

The Big Easy will be the home to the battle of the Tigers, with Clemson and sophomore star quarterback Trevor Lawrence, the likely number one pick in the 2021 NFL Draft, facing LSU and Heisman Trophy winner Joe Burrow, the consensus number one draft pick in the 2020 NFL Draft. Both Tigers also call their stadiums Death Valley, one historically named Death Valley at Memorial Stadium in Clemson, South Carolina, the other nicknamed Death Valley due to its defeaning noise at Tiger Stadium in Baton Rouge, Louisiana. Additionally, both teams come into the natty with undefeated 14-0 records and Clemson looks to make it two straight undefeated, national championship seasons and extend their winning streak to 30 games, with their last loss coming in the 2018 College Football Playoff Semifinal at the AllState Sugar Bowl inside the Superdome in New Orleans to the eventual national champions Alabama Crimson Tide.

LSU's last national championship game appearance came in 2011 inside the Superdome, an embarrassing 21-0 loss to archivals Alabama that ushered in the College Football Playoff era from the BCS.

How to watch Clemson vs. LSU Live TV and Stream

7:00 PM8 months ago
The Clemson vs. LSU game will be played at the Mercedes-Benz Superdome in New Orleans, Louisiana. The kick-off is scheduled at 8 PM ET.
3:53 PM8 months ago

The Clemson Tigers are eager to defend their title tonight!

If you want to watch the game on TV, ESPN will broadcast.

Their last national championship game  was a losing effort to Alabama in the 2012 BCS National Championship Game.

3:44 PM8 months ago
LSU's Joe Burrow and New Orleans Saints' Drew Brees finally met this week prior to the game.

'I was a Saints fan because of you', said Burrow to the historic NFL QB. 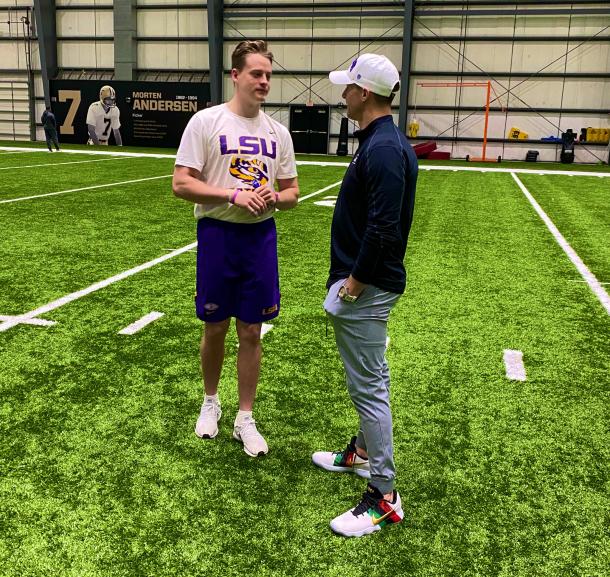 3:40 PM8 months ago
The Mercedes-Benz Superdome in New Orleans was announced as the host venue for this College Football National Championship on November 4, 2015.

The stadium which holds up to 76,468 fans for football matches is expected to be at capacity for tonight's game. 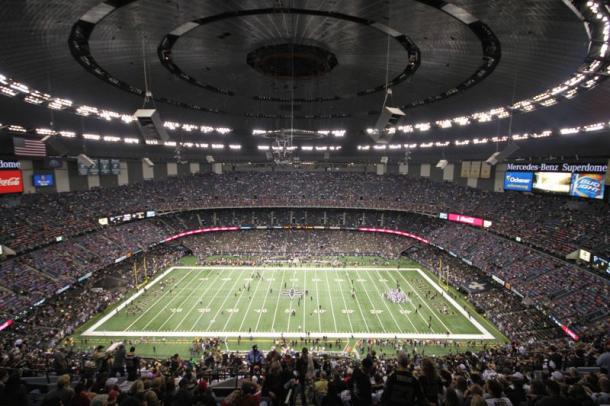 3:33 PM8 months ago
Both teams enter the bowl with 14–0 undefeated record.

The winning team's 15–0 record will match that of the 2018 Clemson Tigers. This will be only the second time  since 1987 that a team finishes with such single season record.

3:23 PM8 months ago
Clemson had a closer semifinal against Ohio State.

The Tigers bested the Buckeyes with a score of 29-23 in the Fiesta Bowl at the State Farm Stadium in Glendale.

Their clash ended in a 63-28 win for the Tigers in the Peach Bowl on December 28th at the Mercedez-Benz Stadium in Atlanta.