West Indies produced a superb chase of 322 to defy the odds and clinch a first Test win in England for 17 years.

Led by opener Kraigg Brathwaite (95) and number four Shai Hope (118) - the duo who put England to the sword with hundreds in the first innings - they got over the line with five wickets to spare, Hope becoming the first man to score hundreds in both innings of a first-class match at Headingley in the process. 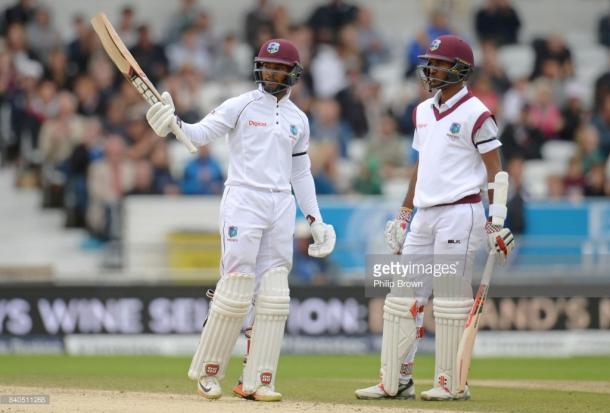 Opening batsmen Brathwaite and Kieran Powell (23) resumed play on day five with the score on 5-0, and dug in well to reach 46 without loss, seeing off the threat of new-ball pair James Anderson (0-73) and Stuart Broad (1-91) along the way.

However, it was Broad who made the breakthrough, tempting Powell into an edge that was held well by Ben Stokes at fourth slip.

Brathwaite in particular rode his luck to remain at the crease, Alastair Cook dropping a catch at first slip from the bat of the Barbadian - when he only had four runs to his name - off the bowling of Broad.

The 24-year-old then proceeded to cash in on his good fortune, and after Kyle Hope had been unluckily run out backing up by Broad, combined once again with his partner from the previous innings to lead their team towards the target.

With many tipping the English pace bowlers to thrive, thanks to seemingly swing-friendly conditions added together with arguably one of the greatest exponents of the moving ball in Anderson, Brathwaite and Hope managed to get themselves on top in a gripping battle, and chipped away consistently at the total.

When Brathwaite edged Moeen Ali (2-76) to Stokes at slip, tantalisingly short of a second century of the match and with 125 runs still required, there was a sense that the home side may have wrestled back some of the momentum which had seemingly slipped from their grasp.

Alas, the West Indian middle-order calmed any developing Caribbean nerves, with Roston Chase and Jermaine Blackwood - both alongside Hope - taking their side to the edge of victory.

Chase produced an ice-cool 30 before he departed to a flying catch by substitute Mason Crane at mid on, whilst Blackwood’s knock of 41 consisted of three fours and two sixes and was full of typically extravagant shots - so it was perhaps fitting that he was out stumped with only two runs needed. 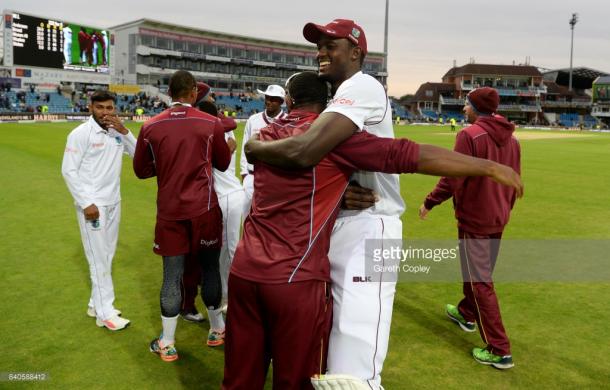 Having suffered such a heavy defeat in the first Test at Edgbaston, for the West Indies to produce such a spirited comeback in the face of adversity may have placed a seed of doubt in the minds of those who had written them off.

With the series now set to head to a winner-takes-all clash at Lord’s, there is no doubt that the result here has reignited the flame of interest in a series that may have appeared to have had an automatic winner before a ball was bowled.

Stuart Law’s men have proved that they can produce a performance capable of securing a victory over five days. If they can recreate their efforts in Yorkshire at the Home of Cricket, then it will surely be looked upon as one of the greatest cricketing shocks of recent times.

At the time, many lauded captain Joe Root's decision to insert their opponents for a tricky six-over spell late on Monday evening.

With Jason Holder's team extremely flat and low on confidence having seen their first innings lead quickly evaporate, very few felt that they were capable of chasing down a target of such magnitude.

Added to their abysmal display with bat in hand in Birmingham, the general consensus amongst pundits and fans was that it was the correct decision to try and grab one or two quick wickets prior to the close of play on day four, with reward hugely outweighing risk.

Yet, with that move now having backfired, there has been a call not to do the obvious and hound Root's call to ask their opponents to bat again with the benefit of hindsight, as only a small proportion of the cricketing world could have envisaged what would happen.