The Telegraph has reported that Aston Villa are closing in on the signing of Kasimpasa winger Mahmoud Hassan, known as Trezeguet.

The deal to bring the Egyptian to Villa Park will cost an initial £8.75 million. The Telegraph reported that the highly-rated winger was set to have a medical over the weekend.

The Egyptian impressed for his country at the African cup of Nations in what was an ultimately disappointing tournament for his nation. He played alongside current Villan Ahmed Elmohamedy whilst at AFCON.

The Egyptian turned out 34 times for Kasimpasa in the Turkish Süper Lig, contributing 9 goals and 9 assists as they finished 14th. The tricky winger was the third-best dribbler in Europe last season behind Lionel Messi and Allan Saint-Maximin.

Trezeguet will look to go straight into the Villa starting eleven should his move be completed. Trezeguet will be competing with summer signings, Anwar El Ghazi,  Jota and youngster Andre Green for playing time.

A likely scenario would see Trezeguet starting on the left with Anwar El Ghazi moving over to the right side of the field. Spaniard Jota would likely take up a place on the bench, leaving Green to fight his way into the squad. 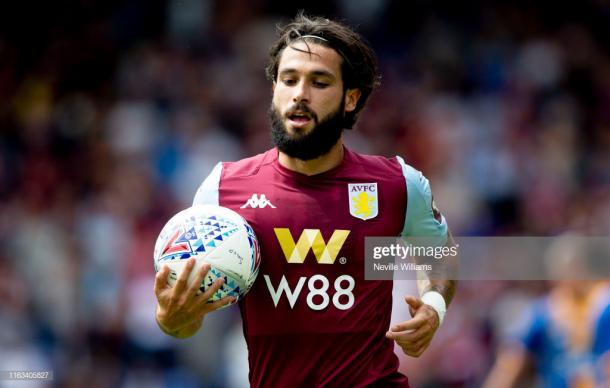 The deal for Trezeguet will take Aston Villa's summer spending past the £100 million mark and the Villan's are showing no signs that they'll be stopping any time soon.

Brazillian under 23 captain Douglas Luiz is also set to complete his move to Villa with The Telegraph reporting that subject to a work permit the deal should be completed in the coming days.

The Manchester City midfielder will join the Birmingham club for a reported £15 million deal. The Brazillian met up with the squad whilst they were in Minnesota for their pre-season friendly against Minnesota United.

Should Villa reach a deal with Sean Dyche's side the experienced Englishman would likely become the starting goalkeeper despite Jed Steer's heroic performances near the tail end of the season.

Whilst a great shot-stopper, Steer's distribution often sells the Villa backline short and Dean Smith could favour the experience of Tom Heaton in the clubs first season back in the Premier Leauge.

Aston Villa vs Wolverhampton Wanderers Preview: Midlands derby with points needed at both ends of the table15 days ago

Douglas Luiz: Aston Villa's diamond in the rough11 days ago

Aston Villa vs Sheffield United 2007: The match that changed it all24 days ago

As football rests, a look back at this week in Aston Villa's history4 months ago

Bournemouth 2-1 Aston Villa: Cherries get the better of their relegation rivals5 months ago
Restore your password
Please enter your user name or email.
Login Member or Writer Panel
Enjoy your own Customized Newspaperwith VAVEL topics' carousels!