Paris Saint-Germain have created football history, breaking the world record transfer fee. The Parisian club have completed the signing of Barcelona's Neymar in a €222million deal to make him the world's first £100m-plus footballer.

The world-record fee for a player was only broken last summer when Manchester United broke the bank for former academy midfielder Paul Pogba, but PSG have smashed that by meeting Neymar's €222m release clause.

Neymar's move has been one of the most talked about transfer sagas in recent memory, but in theory, it looked out of reach due to the substantial release clause and the Brazilian forming one of the deadliest attacking trios in history along with Luis Suárez and Lionel Messi.

The 25-year-old moved to Catalonia back in 2013 from Santos and has emerged as one of the brightest young talents in the world game. The winger signed a new five-year contract with Barca in only 2016

The now-completed deal took a massive turn on Wednesday with Neymar turning up to Barca's training ground and telling his team-mates his plans to leave. The club and manager Ernesto Valverde excused him from training and he was gone within half an hour of arriving

Neymar has signed a bumper five-year deal at the Parc des Princes, and it is reported that the 25-year-old will be earning an eye-watering £850,000-a-week. 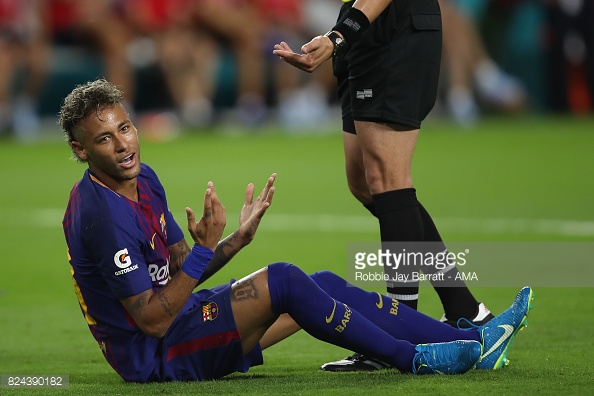 Proved hard to push through

Such a massive move has shaken the foundations of the football world which has already been consumed by money, but the deal of the century almost never materialised as La Liga looked to block the move.

It was indicated last weekend that the Spanish league officials would be reluctant to sign off on such a transfer, with league president Javier Tebas stating that such a move would "infringe" financial fair play rules.

"We will [make a complaint about PSG]," Tebas told Mundo Deportivo. "Because they infringe Uefa’s financial fair play rules and also the European Union’s competition rules."

“We will make a complaint to Uefa," the president stated. "And if they don’t do anything we will take it to the competition tribunals in Switzerland and Brussels."

"We have a relationship [through the Qatari sports channel BeIn]," he concluded in reference to Spain's relationship with Qatar. "For Spanish football but La Liga must defend our clubs in these situations.”

Joan Laporta: "We prioritize the team above all else" 6 months ago

All aboard the Xavineta! 6 months ago

Real Madrid lose their first game of 2022 9 months ago

Karim Benzema, La Liga 2021 Player of the Year. 9 months ago

BBH, the real deal or tribute band? a year ago