The Moto3 began race day at the Circuit de Barcelona, ahead of the Gran Premi Monster Energy de Catalunya, with a warm up in cool but sunny conditions. Practising and modifying settings to be ready for race pace, It was like a mini race on track as they fought for the same piece of tarmac; and somewhere forced to use the run off areas due to sheer lack of room.

Following the death of former Moto2 rider, Luis Salom last year, turn 12 was immediately bypassed and the Formula 1 layout was used for the last meeting. Since, chicanes have been added to slow riders, to enable to continue them to bypass the turn, and to introduce or increase run off areas and gravel traps ready for the race.

However, after running on the modified track on the first day, a Safety Commission meeting resulted in all those concerned deciding that the Formula 1 layout would be best, and so they switched back so records now stood.

Martin quickest during the warm-up

Once again it was Martin who was quickest during the morning warm up session. He was slower than his quickest pace by just over a second, but did enough to make people watch and beware of him come the race; despite the fact he had to run on at the chicane due to there simply not being enough room.

The current championship leader, Joan Mir (Leopard Racing) was second quickest; his fastest time was 0.348 seconds slower than that of Martin. Fenati completed the top three riders during the morning warm-up.

Unfortunately for wildcard rider, Aleix Viu (42 Motorsport), he crashed early on in the 20 minute session at turn two of the track. He lost the rear which caused him to suffer quite a horrific looking highside that left him and his bike in the gravel. Fortunately the Spaniard was able to get up to his feet without assistance.

Jakub Kornfeil (Peugeot MC Saxoprint) appeared to be having issues with the front end of his Peugeot (Mahindra), and made many visits to the pits, and short visits to the track during the frustrating for him, warm up session.

Another incident occurred on track that proved that it was going to be an enduring race later on. Both Scottish rider John McPhee (British Talent Team) and Fabio Di Giannantonio (Del Conca Gresini Moto3) were out together on track and approaching turn one when Di Giannantonio, who was on the inside of the right hand turn, went wide and hit McPhee who was on the outside of the Italian; McPhee shook his head in disappointment.

Martin on pole in Catalunya

Martin was on pole once again this season this time for the Gran Premi Monster Energy de Catalunya. He was to be joined by Estrella Galicia 0,0 rider, Aron Canet but the Spaniard was penalised three grid places meaning he started from fifth instead. It meant that Juanfran Guevara (RBA ROE Racing Team) and Fenati completed the front row. Mir, Canet and Marcos Ramirez (Platinum Bay Real Estate) made up row two.

Guevara leads heading into turn one of the race

After a poor start from pole man Martin, who had a very delayed reaction, Guevara was the rider who led into turn one of the 22 lap race with a bike length to spare. He was soon caught and passed by Fenati who led within corners. Unfortunately for Guevara this started a wave, and he was gradually passed by Mir, Canet, Di Giannantonio, Martin and then Enea Bastianini (Estrella Galicia 0,0) and his teammate Gabriel Rodrigo (RBA ROE Racing Team).

Turn one of the lap was proving to be the overtaking hotspot after they had powered down the start-finish straight using the slipstream to head to tow and then accelerate in front of whoever they used to gain the advantage. By the second lap, Di Giannantonio had made his way to the front of the pack this way.

Four a breast into turn one

It was not easy however, for them, or for viewers to make out where they would place as it was four a breast (plus) into the turn. On lap three Canet, Mir, Di Giannantonio and Fenati were all battling it out to be in front and control the pace of the race, while Martin remained in contact with the four just behind on track.

Lap four saw Fenati used the slipstream to his advantage, but Martin impressed more, using the two bike tow to catapult himself to the front to take the lead after his poor start, for the first time in the race. Two groups had formed at the front made up of five riders.

Canet led into lap five, and Fenati tried to make a move on the next turn; a move that he was to practice trying to pull off throughout the duration of the race. Unfortunately for wildcard rider, Vicente Perez (Reale Avintia Academy) he crashed out at turn eight and was forced to retire from the race.

Bastianini had broken away from his group, and began to tag on to the back of the front group that was now led once again by Canet. Unfortunately for Rodrigo, his race came to an end with a big bump after the already injured rider, who recently broke his collarbone, had a highside at turn 15 of lap 16 before his bike ran over him, and had to be stretchered to the side of the track although he was conscious and able to figure out that they tried to place him on it the wrong way around.

Back at the front of the pack, Canet led a group of three that appeared to be trying to break away as he, Fenati and martin had a bike length or two over now fourth place man, Bastianini who led Di Giannantonio and Mir. Di Giannantonio made a mistake at turn one of lap nine however when he ran wide at turn one and lost a lot of ground and a position when he re-joined the race.

Fenati takes the lead but not for long

Fenati took the lead on the ninth lap but Canet took it back by the next lap when Fenati got sucked back to fourth. Losing his lead to Martin on the next lap, Canet found himself back in front on lap 12 before he was passed by Fenati who pulled off the move he had practiced successfully. The lead group had now become a group of eight riders fighting for the podium.

The cycle continued, turn one remained the hotspot for passing. Ramirez was challenging Martin and Mir for positions on the following lap but Fenati demonstrated to him how it was done when he gained two places in one pass.

Group of eight challenging for the podium

The pressure increased as the 8 heavy group continued their pursuit of the podium. It increased to six a breast into turn one of the track, on lap 17. The traffic meant that Fenati, who emerged successful from the attack on the opening corner, was able to break away slightly creating a gap of half of a second between him and second place Mir.

It was soon shut down as Mir, who had the empty track of him, soon lured him back in as he was clearly not ready to lose any lead or points in his championship. On lap 19, Ramirez ran wide at turn one and los positions dropping back to sixth. Mir had caught and passed Fenati but the feisty Italian stayed with up and went up the outside on the start-finish straight as he tried to get back to the lead but ended up second behind Mar.

The last lap got underway and so much drama occurred in such a short space of time. Martin was leading as it got underway ahead of Fenati, Mir, Canet, Bastianini, Ramirez, Di Giannantonio and Andrea Migno (Sky Racing Team VR46), who after battling for ninth with his teammate Nicolo Bulega and McPhee, had got and passed the last man of the lead group, Tatsuki Suzuki (SIC 58 Squadra Corse).

Migno and Bulega continued attacking and moved up to seventh and ninth respectively when they passed Fenati and Canet. It was far from over however, as the lead pack continued to push on and tried to get whatever way round the ones in front that they could to be on that podium.

Fenati was extraordinary, recovering many positions as he passed through the twists and turns. Using every tactic possible, the front bunch continued to swap and change until they approached the final turn.

Crashes in the final turns

Unfortunately further down the field, on the last lap, Jules Danilo (Marinelli Rivacold Snipers) suffered a huge highside when he lost the rear at turn 10 and was thrown up and over the bike. Somehow, and luckily he appeared uninjured as he quickly got to his feet after the incident.

On the 14th turn, as they passed through the new chicane, Guevara slid out, and having the inside line on the left hand turn, took out Darryn Binder (Platinum Bay Real Estate) in the process who was making an overtake on the outside as they headed into the tight turn 15. Binder was forced to retire but Guevara recovered and went on to finish the race.

Mir crossed the line, appearing to have executed a plan he had concocted perfectly, as race winner on home turf at the Circuit de Barcelona. Emerging as race winner he extended his championship lead by 25 points and meant that the Spanish national anthem was played for himself and his country.

Fenati claimed a fantastic seventh place after he elbowed his way to the front successfully to claim the second step of the podium and 20 championship points. Pole man, Martin finished the raced in third collecting another podium in Spain ensuring the host country was represented twice. The Spaniard now holds both records, his best ever lap was 1:53.368 and he set the Circuit Record lap with a time of 1:53.861 on lap four of the race.

Bastianini just missed out on the podium as he crossed the line in fourth ahead of Spaniards, Canet and Ramrez in fifth and sixth. Di Giannantonio led three Italians who crossed the line and the Sky Racing Team VR46 duo followed behind him; Migno in eighth and Bulega in ninth. Suzuki was ninth ahead of Niccolo Antonelli (Red Bull KTM Ajo) who overtook McPhee, who finished 12th, in the later stages of the race. Philipp Oettl (Sudmetall Schedl GP Racing), rookie Marco Bezzecchi (CIP) and Bo Bendsneyder (Red Bull KTM Ajo) claimed the remainder of the championship points available.

In winning in Catalunya, Mir extended his championship lead. Now on 108 points, he is 32 points ahead of second place Canet, and Di Giannantonio is three points behind on 71 points. Fenati is joint fifth with Mugello race winner, Migno on 68 points and McPhee is down in sixth with 63 points. Third on the podium, Martin is seventh, ahead of Guevara, Ramirez and Bastianini who complete the top 10. 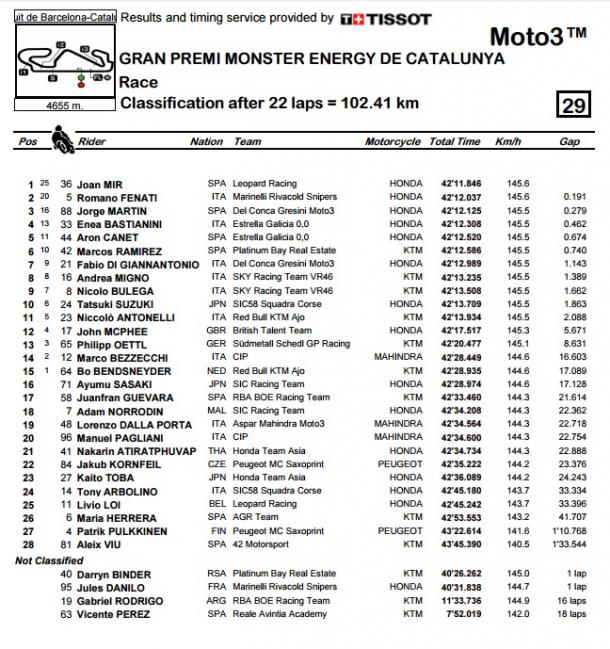 Eifel GP Preview - Who will prevail as F1 returns to Germany? 13 days ago