The Dudley Boyz are the most decorated tag team's in the history of WWE and their story developed further this Monday night on Raw.

The former ECW extremists are nine-time World Tag-Team champions and their return to World Wrestling Entertainment in August 2015 was hoped to give a much needed revival to a failing division.

After feuding with the Wyatt Family and the New Day the two veterans have turned 'heel' in a surprising twist to give much needed focus and interest into the tag team department.

The beginning of the scheduled tables match did not even include the Dudley's to begin with, it was originally between The Usos and the current tag team champions, fearing missing out, the two kayfabe brothers talked their way into the match to make it four on four with their opponents having to search for a mystery fourth partner to even the field.

Mark Henry was the special fourth member of the stars with 'unicorn magic' and was a force in the match before leaving the champions high and dry after becoming agitated after being ordered about.

With the numbers advantage catching up, the Uso's and Dudley's made slim pickings of the Kofi Kingston and co. A patented 3D through a table on Big E won the match, before the boys from 'Dudleyville' attacked their partners for the evening.

A feud is likely in the works for Jay and Jimmy to square off against Bubba and D-von at upcoming pay per view Fastlane, the plans for the division or the New Day however are not yet clear building towards WrestleMania 32, but the recent heel turn offers much more excitement to a department that was slipping into a mundane state.

D-von began the hype on Twitter quickly trying to advertise their turn of face which quickly became a massive talking point on social media.

Bubba was also trying to get in on the action as his tweet sent a clear message to any tag team that wants to set foot into the ring. 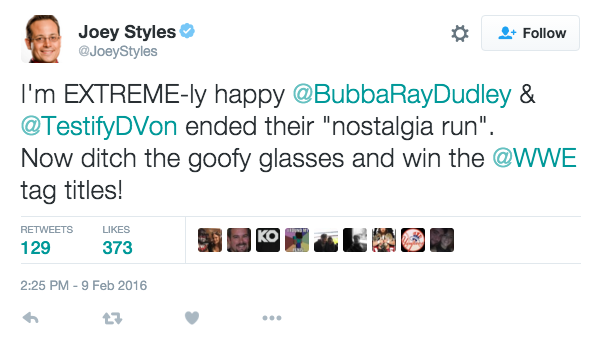 Joey Styles was not far behind as the former 'voice of ECW' urged his friends to ditch their "goofy glasses" and win the tag team titles.

Keeping it in the Family

The feud took little time to gain heat as WWE Hall of Famer Rikishi waded on the events that unfolded on Raw.

The big man was involved with a storyline with the Dudley Boyz in 2001 in which old feelings were brought back up as he witnessed his sons be beaten senseless in the middle of the ring.

Citing their actions as "Not cool" Rikishi was clearly annoyed but could see where they were going with it and was rather mellow about the situation.

Bubba on the other hand was less mellow, he labeled the retired performer as an "old timer" saying there was not a "damn thing you can do about it."

It is unlikely that the former Intercontinental champion will make a comeback in the feud, but his adding to the narrative will only give it a push and create the much needed excitement factor that the division has been crying for.