A good sized crowd was treated to one of the most entertaining games of the year played at Yurcak field last night as the home squad Sky Blue FC and the visiting FC Kansas City played to a 1-1 draw.

A crowd of nearly 3,000 watched as two teams desperately in need of three points had to settle for one each.  “It is a bit frustrating that we did not take the full three points tonight,” said Christy Holly, Sky Blue FC head coach. “We had some really good moments, and our consistency continues to improve overall. Our team has been putting in better performances with each passing week, and that is a measure of where they are and where they want to be.”

The match by far was the most entertaining one played at Yurcak field thus far this year, and as Holly stated, the Sky Blue looked the best as they have all year as they welcomed back forward Sam Kerr from injury.

Sky Blue played extremely well in the first half, controlling the midfield and applying good pressure and bottling up the Kansas City passing. The Blues were unable to sustain passes coming out of midfield, as they were constantly being pestered by rookie Raquel Rodriguez and second-year player Sarah Killion. Rodriguez and Kansas City midfielder Mandy Laddish had a good tough battle in midfield all night.

The match's most controversial moment came early, in the 15th minute in a series that was started by defender Erica Skroski, who crossed a ball towards forward Kim DeCesare. Decesare proceeded to put a solid foot on the feed that Kansas City netminder Nicole Barnhart was barely able to touch. The ball then deflected off the crossbar and appeared to pass the end line inside the goal, but the referee called for play to resume, sending the crowd into an uproar. It was the type of call that any replay would have easily overturned.

For Kansas City, forward Shea Groom was extremely active and throughout the first half, she and her teammates continually found a weakness in the Sky Blue defense that allowed them to slip several passes through, but were unable to connect. However, in the 27th minute, FC Kansas City was able to put the first goal of the evening on the board after midfielder Erika Tymrak sent a solid shot across the top of the 18-yard box to Groom streaking along  her right. Groom then struck a hard left-footed shot that found the back of the net and past a diving Caroline Stanley hanging a 1-0 score line. Tymrak and Groom continue to build solid chemistry that began over their last two matches and can be a dangerous combination moving forward. 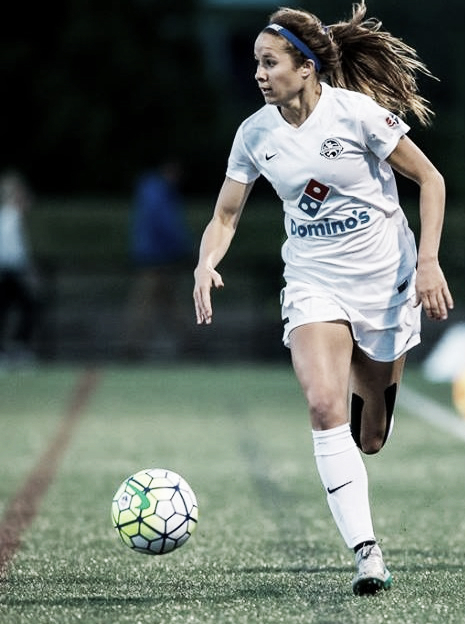 Minutes later, Sky Blue FC  responded in the 30th minute after Killion sent a ball over the top of the FC Kansas City defense for Kelley O’Hara, who was taken down hard inside the area by midfielder Heather O’Reilly. Sky Blue was awarded a penalty kick which Killion hammered it into the left-side netting to level the count at one apiece. The half would close out with neither side truly gaining any solid attack.

The second half of the match had some drama but none of the controversy that the first half did, as both squads aggressively tried to score the winning goal that would award them a much needed three points. O'Reilly launched a beautiful shot on goal that landed on top of the netting in the 62nd minute, but that remained their most direct attack on goal.

The game did see the return of 2015 leading scorer Sam Kerr for the Sky Blue in the 75th minute. Kerr had been sidelined following offseason foot surgery. With a healthy Kerr, a burgeoning talent in Leah Galton, and a dynamic presence in Tasha Kai, Holly now has several solid scoring options coming off the bench.

For Kansas City, defender Brittany Taylor a solid and effective game and goalkeeper Nicole Barnhart continued to show why she is easily one of the top 2-3 netminders in the women's game.