After a tough loss to Reign FC and a short time to rest after that midweek match, Portland Thorns FC received North Carolina Courage at Providence Park.

North Carolina is a well known foe for Portland and one they have learned to hate, maybe even more than the Reign, which makes this a true clásico of the NWSL.

One of the keys for North Carolina’s dominance has been to score as early as they can into the match and that’s exactly what they did against Portland. Crystal Dunn opened the score after Kristen Hamilton service near to the post that couldn’t connect with Lynn Williams but Dunn appeared from behind to kick that ball and put the visitors one up.

North Carolina continued their domination of the game because that’s what they do: They like to possess the ball but not to slow the game down but to attack, swiftly, and to tire out the opponent.

Portland did fall into Carolina’s game but not for too long, thanks to the rookie Simone Charley who started to battle against Jaelene Hinkle and to win those battles, giving her the possibility to pass the ball to her teammates and to serve it to the box.

In that way, Portland’s attack started to flourish, but they didn’t look very dangerous with their final touch. Visitors and hosts changed attack for attack, with Carolina looking better in the the third end. Nonetheless, the Courage didn’t have enough chances to shoot on goal, credit to Portland’s defense.

So the visitors went to halftime up in the scoreboard but weren’t looking significantly better than their rivals to their standards. 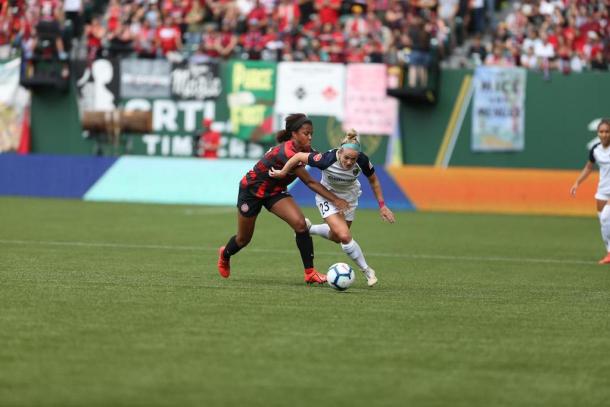 The second half brought two changes to Portland’s lineup. Hayley Raso and Midge Purce entered into the match for Caitlin Foord and Simone Charley, despite her great first half. And true to her style, Purce started to impact the game right away, making combinations with Tobin Heath and starting to make Courage’s defense uncomfortable.

So much so, that in the 56 minute Elizabeth Ball sent a ball to the far post where Purce was standing. Stephanie Labbé went off her line to take that ball but couldn’t grab it and sent the ball into her own goal, with Raso near the goalline just in case.

Both teams replicated what they did it in the first half but in a clearer way and both team started to look more dangerous, with great chances for both sides. A substitution for North Carolina, Jessica McDonald, subbed in for Williams brought new blood to the attack and with that the Courage gave Portland’s defense, and specially Adrianna Franch, lots of work to do.

But the match wasn’t going to end in a draw, everybody knew that, and most of the fans thought the Courage were looking better and were finally going to finish one of their chances. Nonetheless, the subs proved to be key for Portland again. In the 82 minute Christine Sinclair sent a ball to the near post to Raso, who touched the ball but didn’t go in. Instead, it hit Abby Erceg’s body and Labbé couldn’t catch it which made it 2-1 for Portland.

The last substitution for the hosts was Ellie Carpenter for Elizabeth Ball to secure the result. And although she’s very important to Portland’s defensive line, it was Franch the one who proved to be key with a couple of amazing saves that maintained the result and gave the Thorns the three points that catapulted them to the top of the table.