We hope you enjoyed the Liga MX Femenil Rayadas vs Pachuca telecast. Keep checking back on VAVEL.COM for updates throughout the day.
11:59 PMa month ago

Rayadas won 4-0 against Tuzas and got their pass to the semifinal, in a match where the Tuzas started with confidence, but as the minutes passed and the goals fell, the roles were reversed, as the Rayadas kept the ball and desperation fell on the Tuzas, as they had an extra player in most of the game, but the two consecutive goals annihilated them.
11:54 PMa month ago

5 minutes of compensation are added.
11:49 PMa month ago

Pachuca is now only playing for the consolation goal, as a comeback seems very difficult, and with this result there will be two classics in the semifinals.
11:44 PMa month ago

Hermoso tries to shoot outside the area, but his shot goes over the top.
11:34 PMa month ago

Mónica Rose Alvarado Rodríguez leaves the field on a stretcher after an injury.
11:24 PMa month ago

Aylin Ariana Aviléz was left lying on the field after being hit in the head and received medical assistance.
11:14 PMa month ago

GOOOOL! for Rayadas, Yamile Azenek Franco took a shot from the 11-yard line at the left post and despite the goalkeeper's effort, the ball went in.
11:09 PMa month ago

A handball is called and a penalty kick is awarded to Rayadas.
11:04 PMa month ago

The referee goes to the VAR to review a Pachuca handball.
10:59 PMa month ago

Tempers are heating up on the pitch, the Rayadas are at a slow pace, while the Tuzas want to go all out.
10:49 PMa month ago

GOOOOOL! for Rayadas, Aylin Ariana Aviléz found a ball after a series of rebounds after a corner kick, with the deflection of the "Tuzas", she managed to get in.
10:44 PMa month ago

GOOOOOLAZO! by Rayadas, after a free kick by Rebeca Bernal, she put the ball to the right post with a left-footed shot that hits the post and goes in, leaving the goalkeeper standing still.
10:39 PMa month ago

Monica Ocampo was close to the goal, Ocampo was in front of the goal and the ball went in, but before a foul was committed that annulled the goal.
10:34 PMa month ago

Pachuca push forward, Hermoso tries to reach the ball, but ends up conceding a goal kick.
10:29 PMa month ago

The second half of the partial victory and tie on aggregate between Rayadas and Tuzas begins.
10:24 PMa month ago

With that goal, the first half ended with a partial victory and a draw on aggregate between Rayadas and Tuzas.
10:19 PMa month ago

GOOOOOL! for Rayadas, after a corner kick, Christina Marie Burkenroad headed the ball past the goalkeeper to make it 1-0.
10:14 PMa month ago

2 minutes of compensation are added.
10:09 PMa month ago

Monterrey is starting to adapt with one player less, they are having more chances than the Tuzas, who are defending their goal.
10:04 PMa month ago

Desperation is starting to set in for both teams, as fouls are falling more frequently.
9:59 PMa month ago

Pachuca gained more confidence after the sending-off, wanting to take advantage of the numerical superiority, putting the Rayadas in trouble.
9:54 PMa month ago

Sent off, Monterrey's Lizette Montserrat Rodriguez gets a red card after bringing down Corral on a clear scoring chance.
9:49 PMa month ago

Rayadas are starting to feel more confident on the field, having more attacking chances, but the field is not benefiting them.
9:44 PMa month ago

Both teams are not giving up, but the pitch is being a factor, as the players are slipping in the rain.
9:39 PMa month ago

The ball is going from one area to the other, but after a lot of effort it doesn't make it in, both teams try to enter through the flanks.
9:34 PMa month ago

The regias try to run down the flanks, but can't beat a Tuzas team that clears any ball, earning their first corner kick.
9:29 PMa month ago

Pachuca is the one who starts dominating the match, being in front trying to score early, but the locals get the ball out of the way.
9:24 PMa month ago

The match between Rayadas and Pachuca is ready, at the BBVA Stadium, where a stadium with an acceptable entry can be seen.
9:19 PMa month ago

Both teams take the field to kick off this Liga MX Femenil match at the BBVA Stadium.
9:14 PMa month ago

BBVA Stadium is a soccer stadium located in the municipality of Guadalupe, Nuevo Leon, Mexico, which is part of the metropolitan area of Monterrey, home of the Monterrey Soccer Club of Mexico's First Division and its women's team, the Rayadas. The stadium is a joint project of the team and the FEMSA Group. It has a capacity for 53,500 spectators and was inaugurated on August 2, 2015.
9:09 PMa month ago

This is the XI with which the visitors will take the field at the BBVA Stadium, a Liga MX Femenil match.

This is the XI with which the local team will take the field at BBVA Stadium, a Liga MX Women's League match.

Pachuca made their home advantage count and dramatically defeated Monterrey Femenil 2-1 in the first leg of the Quarterfinals. From the start of the match, both teams threw everything forward to open the scoring, as it was a back-and-forth duel in which both Tuzas and Rayadas had their chances.
8:54 PMa month ago

Confident of a comeback

Eva Espejo, Rayadas' coach, made it clear that the 2-1 defeat against Pachuca Femenil in the first leg of the quarterfinals did not eliminate them and they are confident of reversing the score in the second leg.
"At times I feel comfortable, at times we were able to play our soccer, but I think we had too many inaccuracies. It's 180 minutes, the first 90, and we can get the result there," she commented.
"These scenarios have been played before and we have turned them around at home.
8:49 PMa month ago

Eva Espejo applauded the action of the VAR, which on this occasion disallowed a Tuzas goal for supposedly being offside, and described the system's actions as good.
"I have always thought that as long as the VAR makes the game fair, it is perfect, I think the interventions it had today were both good."
8:44 PMa month ago

Juan Carlos Cacho, coach of Pachuca Femenil, confessed that adapting to the VAR is complicated, but he understands the work of the referees and the time involved in reviewing the plays.
"Yes, it is something strange, but I understand the referees for that delay they have to make, it is difficult to adapt, but I think it is fair for either team. The VAR is a tool, but it doesn't count if we stop doing things," commented the strategist.
8:39 PMa month ago

Juan Carlos Cacho applauded the way his team stood up after Charlyn Corral's goal was disallowed by the VAR to end the match with a 2-1 win.
"I'm happy with the work my players did, because the way we planned it played out. These are different matches, which have to be perfect. I think we dominated most of the match, there is still another match to play".
8:34 PMa month ago

There are different scenarios in which both Tigres Femenil and Rayadas will face each other, some with the comfort provided by the high score in their favor against the Amazonas, while for the others, only a win will increase their chances of advancing to the next phase, with the possibility that the two teams from the North could meet.
It is worth noting that the team coached by Eva Espejo has not lost at home since Day 7 of the 2021 Clausura Tournament, when they lost 4-3 to FC Juárez at the El Barrial facilities.
8:29 PMa month ago

For Aylin Aviléz, it is her best tournament and she feels proud of the club. The albiazul striker spoke and was excited about the team's good performance, but more than that, she also spoke on a personal level, about how she feels and not only in statistics, but in the personal and emotional aspect.
"Very happy, it is not only my best tournament in terms of statistics, but also emotionally and personally. It's my best tournament since I joined the team. It's the beginning, I'm excited to continue working along the same lines," she said.

Tune in here Rayadas vs Pachuca in the Liga MX Femenil

Do not miss a detail of the match with the live updates and commentaries of VAVEL. Follow along with us all the details, commentaries, analysis and lineups for this Rayadas vs Pachuca match in the second leg of the quarterfinals of the Liga MX Femenil.
8:19 PMa month ago

What time is the Liga MX Femenil Rayadas vs Pachuca match?

This is the start time of the game Rayadas vs Pachuca of October 31st 2022 in several countries:

How does Pachuca Femenil fare?

Pachuca Femenil comes into this match in seventh place in the overall standings with 25 points and a 2-1 win in the first leg of the quarterfinals. They have accumulated eight wins, eight defeats and one draw in the regular phase. The Hidalgo team will seek to reach the final and win the title.
7:49 PMa month ago

How are Rayadas coming along?

Rayadas finished the tournament in second place in the overall standings with 42 points, after 13 wins, three draws and one loss. In the last game of the regular phase they defeated Santos four goals to zero and in the previous game they lost 2-1 to their opponent in this match, in the first leg of the quarterfinals.
7:44 PMa month ago

Watch out for this Pachuca player

Charlyn Corral, a 31-year-old Mexican forward, has been the team's top scorer in recent seasons, her performance in the team has been good, in 17 games played she scored 12 goals, so the player needs to close the tournament in a better way and lead her team to the title, having played a total of 1530 minutes. 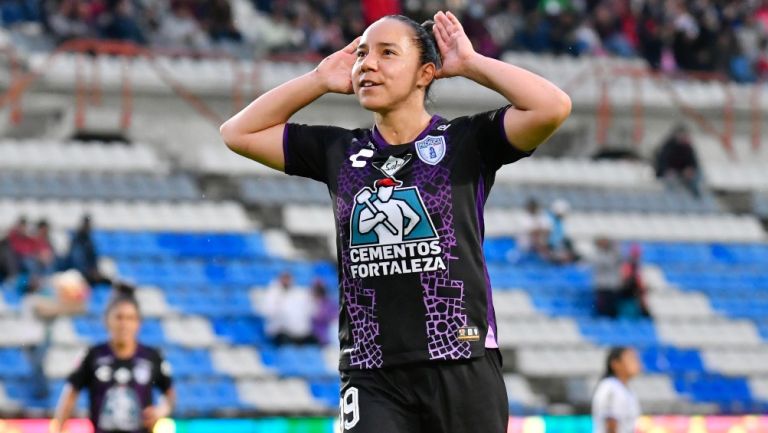 Watch out for this Rayadas player

Christina Marie Burkenroad, 29-year-old Mexican center forward has been the Rayadas' goal scorer in recent seasons, her performance in the team has been good, in 17 games played she scored 16 goals, the player needs to close the tournament in a better way, because in the last game against the Tuzas, she could not score, so that can give her confidence for this duel.
7:34 PMa month ago

Good afternoon to all VAVEL readers! Welcome to the broadcast of the Liga MX Femenil match Rayadas vs Pachuca. The match will take place at Estadio BBVA, at 21:00.