England banished memories of their meek Champions Trophy exit with a barnstorming nine-wicket victory over South Africa in the first Twenty20 international of their three-match series.

Impressively limiting their opponents to just 142-3 off their 20 overs, Alex Hales (47*) and Jonny Bairstow (60*) then led the charge to see their side over the line at an Ageas Bowl bathed in sunshine. 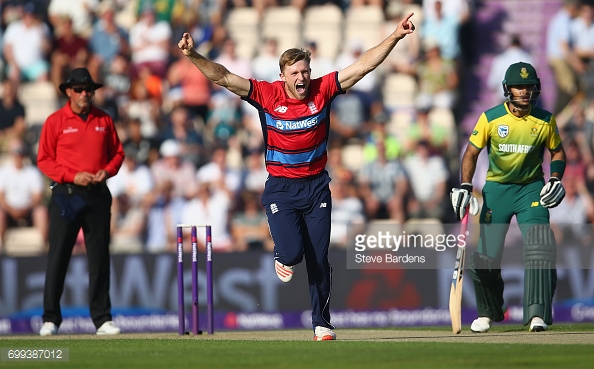 Having got off to a nightmare start, with JJ Smuts bowled by David Willey (1-34) from the first ball of the match, Reeza Hendricks (3) was then caught at mid-wicket and David Miller (9) caught behind soon after - both off the bowling of Mark Wood (2-36) - to leave the tourists wobbling at 32-3.

Coming together at the start of the fifth over, AB de Villiers and Farhaan Behardien (64*) batted together for the rest of the innings, however did not suitably accelerate their scoring to post a score which would challenge the English batsmen.

Tied down in the middle overs by Hampshire spin twins Mason Crane - making his international bow - and Liam Dawson, the right- and left-arm duo worked well in tandem to restrict the batsmen, giving away few bad balls in their combined eight overs, going for only 41 runs between them.

With many expecting the Proteas batsmen to ramp up their scoring rate the further the innings went on, that time never came; whilst they accumulated plenty of ones and twos, the big over of 20+ did not arrive.

The usually sparkling de Villiers continued to struggle on, and although he did dispatch a couple of stunning slog-swept sixes late on, his 58-ball knock was littered with ill-timed shots, eventually finishing up on 65*. The fact that one of best limited-overs batsmen of recent times struggled to stamp his mark on the game is testament to the dedicated and consistent performance of the England bowlers. 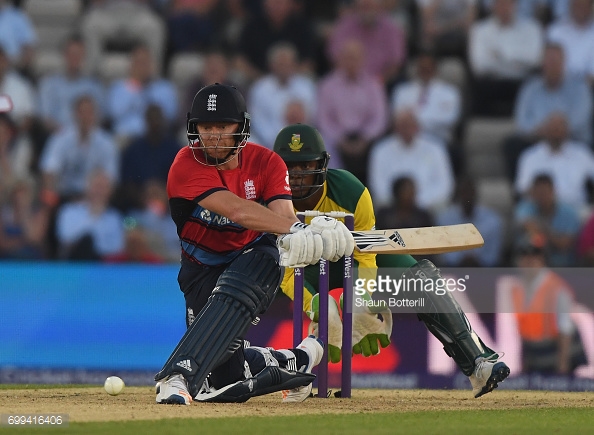 With South Africa having trouble adapting to the Southampton conditions, England did not suffer the same fate, and batted with consummate ease on the south coast.

Despite being dropped for last week’s Champions Trophy semi-final against Pakistan, Roy showed no ill-signs of that decision, and smashed his way to a quickfire 28 off 14 balls, which included 18 from one Wayne Parnell (0-26) over, before missing a reverse-sweep to fall lbw to Andile Phehlukwayo (1-11).

As was the case on Wednesday Bairstow took his place at the crease, and he carried on from where Roy left off, combining with Hales to bludgeon their way towards the target.

The two right-handers displayed contrasting styles - Hales more agricultural, Bairstow the classier of the pair - and there was a clear favouring of the leg-side and off-side respectively.

Hales whacked two sixes off Imran Tahir, who took some serious treatment, going for 37 runs off three wicketless overs, whilst Bairstow used his feet well to hit a couple of maximums down the ground.

Yorkshireman Bairstow continued his superb form of late, and illustrated his ability to adapt his game to any situation, in any form of the game.

It was therefore fitting that the impressive wicketkeeper-batsman hit the winning runs, to firmly press his case to remain a permanent fixture in England’s limited overs sides.

Harmison: Broad and Anderson have stepped up a month ago

T20 World Cup 2021: Australia vs England preview a year ago

England vs India: Fifth Test preview- Can Kohli's Side make history? a year ago

England vs India: Third Test preview a year ago

England vs India: Second Test preview a year ago