Rain put pay to England’s hopes of further pressing their advantage on the third day of the third Test against South Africa at The Oval.

Having reached 74-1 in their second innings, a lead of 252, England were denied the chance to move greater into the ascendancy when the heavens opened at around 14:45 BST.

Keaton Jennings  - despite surviving both a dropped catch and an overturned lbw decision - and Tom Westley are the men not out for the home side, and will look to increase the score for their country when play resumes on Sunday morning.

Meanwhile, England managed to finish off the South African tail during the earlier stages of the morning session, with the tourists all out for 175.

Morne Morkel edged behind off James Anderson for 17 and Temba Bavuma (52) nicked off to Jonny Bairstow behind the stumps to present Toby Roland-Jones with a fifth wicket on debut, becoming the first English fast bowler to take a five-wicket haul in their maiden Test since Graham Onions in 2009.

Roland-Jones the star of the show 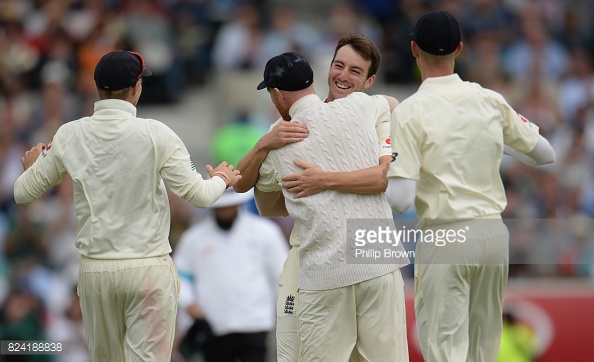 With South Africa eight down by the close of play on Friday, England sensed a chance to wrap up their opponents’ innings early on, especially with handy all-rounder Vernon Philander seemingly unable to bat due to being hospitalised with a stomach virus.

However, Bavuma and Morkel quashed that plan, and combined their strikingly different characteristics - Bavuma diminutive and nifty, Morkel tall and powerful - to frustrate the home bowlers, exploiting the near-perfect batting conditions to put on 47 for the ninth wicket, having resumed play with the score on 126-8.

It was only when Anderson enticed Morkel into gifting a catch to first slip that the stand was broken, and despite reservations Philander did then take his place in the middle.

He contributed ten to a 14-run, last-man partnership alongside Bavuma.

It was fitting that it was Roland-Jones who claimed the final wicket, adding the gloss to the exceptional spell he had bowled the day before which left him with four scalps overnight.

Jennings looks to stake his place 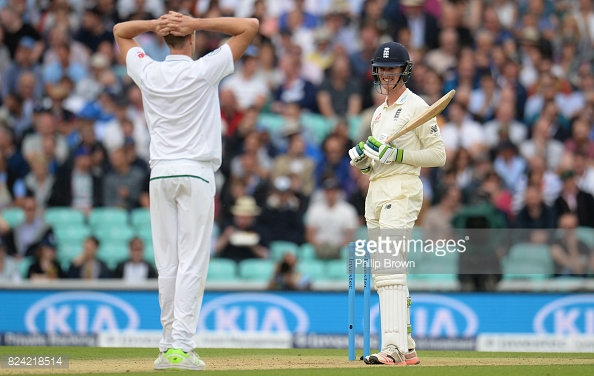 Having seen some question his inclusion in the side since his magnificent hundred on debut in India in December, opener Jennings is now searching for another big total which will silence the doubters.

The 25-year-old will sense that there is no better time to deliver that score, as he will seldom receive more luck than in his knock of 34*.

Seeing a chance put down by Dean Elgar at third slip and Kagiso Rabada go unlucky when the batsman was reprieved thanks to an inside edge off a leg-before appeal, the South-Africa born Durham player will be keen to cash in on his fortune when he returns on the penultimate day of the match.

After Alastair Cook had been dismissed thanks to a beautiful delivery from Morkel, the ball angled into the former captain before straightening and taking his off-stump to remove him for just seven, Jennings combined with fellow inexperienced player Westley to push their team’s lead on furthermore.

He added 44 runs alongside the debutant, with Essex batsman Westley looking extremely confident in reaching 28*, driving with great conviction during his time at the crease.

Harmison: Broad and Anderson have stepped up a month ago

T20 World Cup 2021: Australia vs England preview a year ago

England vs India: Fifth Test preview- Can Kohli's Side make history? a year ago

England vs India: Third Test preview a year ago

England vs India: Second Test preview a year ago