21:56 - Thank you for joining me for VAVEL's coverage of Chelsea's win over West Ham. You can find me on Twitter @Danialkennedy95 and until next time, enjoy your evening!

21:55 - West Ham will look to improve in their opening league match against Bournemouth while Chelsea will take on Watford

21:54 - They had their deserved goal early in the second half eith Hazard's penalty, which looked to be all in vain after Collins' excellent eqauliser. But a late effort from Costa secures the three points for the Blues

21:53' - Chelsea were the better side throughout the majority of the contest, with good chances from Ivanovic, Hazard and Willian in the first half.

93' - Hammers turning up the pressure but Chelsea dealing with it well in the final minute of added time.

89' - COSTA WINS IT, The Spaniard wins it on the edge of the area and with no pressure from Collins he sets himself up and gives Adrian as he places it in the bottom corner which sees Conte celebrate with the crowd 2-1.

7' - Ball over the top lookign for Costa but the Spaniard is stretching.

86' - Reid gets in front of Batshuayi but falls to Pedro but his effort is wide of the post.

84' - Another sub with Oscar off for Batshuayi and Hazard off for Moses, 1-1 with five minutes to play.

84' - Batshuayi is set to make his Chelsea debut as he waits on the sideline.

83' - Kante brings down Payet and is another Chelsea player walking on thin ice.

81' - Little under ten minutes to go at the Bridge, and it seems that Collins has managed to snatch a point for Bilic's side.

79' - Chelsea make a change with Willain making way for Pedro.

76' - WEST HAM ARE BACK IN IT, Corner comes in deflected back to Collins and he hits on the half volley which gives Courtois no chance. 1-1 !!!!!!

75' - Payet's free kick is deflected behind for a corner.

73' - Azpilicueta looks to clear and brings down Carroll, dangerous area for Payet who is booked for dissent against Anthony Taylor.

70' - Noble brings down Oscar on the edge of the area and it looks dangerous....... but it is straight at the wall

68'- Noble bought down and it looks like Payet territory.... but it is cleared with ease

67' - Costa goes in rough on Costa and he is walking a fine line having already been booked, but looks to have gotten away with it

60' - Hour gone and it is Chelsea in the driving seat, Conte's side have had the best opportunties and it is the Blues that have the lead with Hazard's penalty 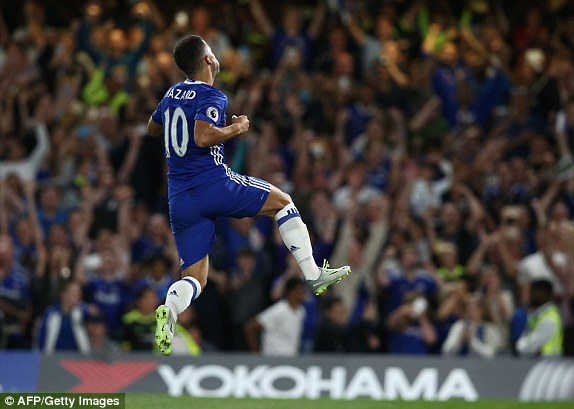 56' - Payet warming up on the sideline, could the Frenchman be the difference in getting the Hammers back in this match ?

51' - Antonio is been brought off here for Sam Byram, sad to see after his excellent season last year but his mistake has cost the Hammers here

50' - Willian looks to cut it back for Hazard but Antonio is there to block, Chelsea turning the screw now

47' - CHELSEA TAKE THE LEAD, sloppy defending from Antonio and Hazard is on hand to slam the ball down the middle and just under the crossbar 1-0 Chelsea !

20:50 - VAVEL's coverage of the second half between Chelsea and West Ham will follow very shortly

20:48 - It hasnt been a memorable half for the either side, Chelsea have had the best oppoertunties through Ivanovic, Hazard and Willian. While Hammers dealt with the injur blow to club-record signing Andre Ayew

45' - Two minutes added time in the first half

44' - Free-kick for Chelsea as Oscar is clipped.... which is eventually cleared

41' - Little under five minutes until the break and chances have been scarce, but it is Conte's side that have had the better of them but remains goalless 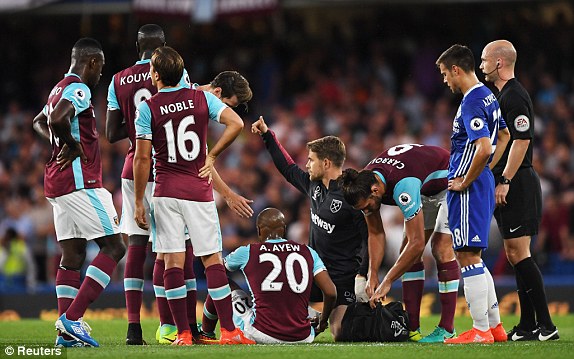 36' - Adrian comes flying off his line as Costa is lurking but the Spaniard does well. Little under ten minutes until the break

28'- Play has died back down again, with Ivanovic having the best chance, but the flow has been interupted by the amount of fouls so far. Still 0-0 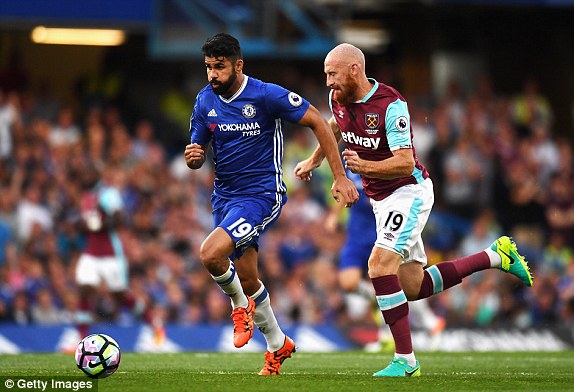 20' - Another yellow card as Collins brings down Costa

18' - Collins brave to dive in at the feet of Costa, appeals for a penalty as Oscaer goes under the pressure of Reid but appeals are waved away

13' - Ball quick into Hazard on the edge of the area, chests it on the half-volley but was well over the crossbar

12' - As I say that, Ivanovic manages to wriggle his way into the area as he looks for the near post, but Adrian is there to plam it wide

5'- Valencia has a good free kick in a dangerous position....... but Courtois is fouled as he punches it away

4' - Nobody made more tackles than the Premier Leafue winning Kante last season, but will be walking a fine line as Cahill is blown up for a tackle on Carroll

1' - Early foul there from Collins, on Diego Costa

19:57 - All eyes are on Conte as a new era at Stamford Bridge gets underway

"We have worked very well and I think the team is ready to start the season. We have a tough game against a strong side.

"Kante has settled very well in the team. He is fantastic, with good technique and stamina and he can help the team this season."

19: 52 - Ahead of kick-off Conte has talked about a tough test in his first match

19:49 - New boy N'Golo Kante warming up ahead of his debut for the Blues. Little over ten minutes until kick-off 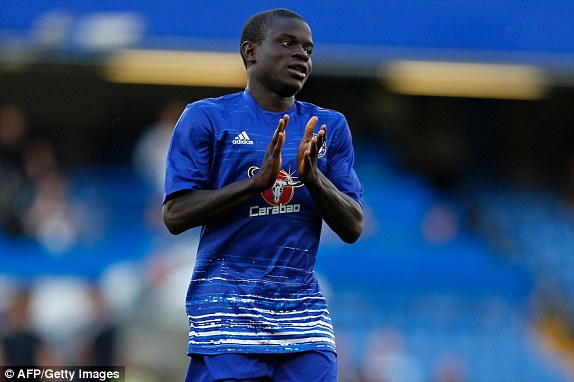 19:43 - The Hammers will be looking for their first win at Stamford Bridge since 2002, and will be boosted by their 2-2 draw at the Bridge last season

19:36 - Both Dimitri Payet and Thibaut Courtois warming up ahead of tonight's kick-off 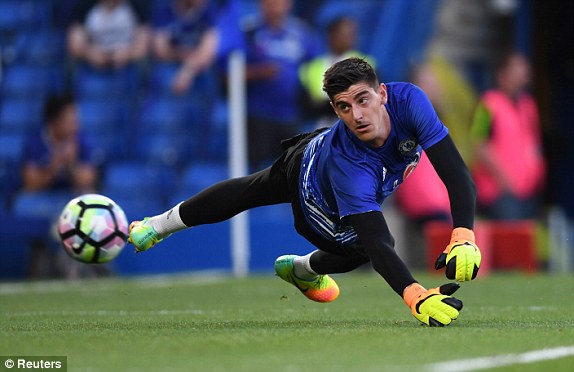 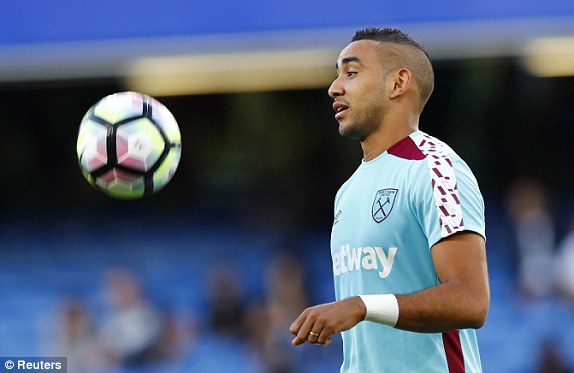 19:33 - Little under 30 minutes until kick-off at Stamford Bridge and the players have been out on he pitch warming up ahead of kick-off

"They are three new players but they are very experienced, at least two of them. Ayew has done it in the Premier League and is a great player.

"We are expecting big things from them, not just to be squad players. They are ready, they were really good in training."

19:24 - Before the start of the game, Bilic talked about his picks and paticualr his three new starters

19:22 - Fun fact that there is one change from the side, apart from Kante, that started the opening game of last season, which is the absence of Cesc Fabregas

19:13 - It is just one new face for Chelsea, and that's Kante, with Batshuayi on the bench.

19:12 - Masuaku, Nordtveit and Ayew all make their competitive debuts for the Hammers, with Sofiane Feghouli sitting out the game all together.

19:05 - Team news for both sides will follow very shortly

19:05 - This clash at Stamford Bridge will pit two sides who had polar opposite seasons last year, both but looking to improve on their showing in the 2015/16 season

19:03 - Hello everyone I am Danial Kennedy and welcome to VAVEL's coverage of Chelsea - West Ham United

However Bilic's side can take confidence from last season's performances to claim their first away win since 2002. The Hammers remained undefeated against Chelsea last season, with a 2-1 win at the Boleyn Ground, and a 2-2 draw at the Bridge. Manuel Lanzini gave the Hammers a spectacular lead, before Cesc Fabregas' equaliser. Carroll looked to have secured all three points, but a late controversial penalty from Fabregas saw the points eventually shared.

The Hammers are expected to struggle at Stamford Bridge, if recent head-to-head records are anything to go by, with the Blues remaining unbeaten in the last ten games on their home turf.

The loss of Aaron Cresswell to a long-term injury looked to be a big blow for Bilic, but the Croatian has signed Arthur Masuaku and he is set to make his debut for the side, with Michail Antonio being played on the other side. Sofiane Feghouli could make his competitive debut for the Hammers, along with club-record signing Ayew, joined by Andy Carroll up top to create a dangerous front three.

For now Conte will have to stick with some familiar faces, with John Terry, Gary Cahill and Diego Costa all expected to start on Monday. Conte has made no mistake that he is still looking to add to his side, before the window slams shut on August 31.

The London side managed one win in their pre-season friendlies, before passing through the Europa League play-off against NK Domzale, but were defeated 3-2 by Juventus in the London Stadium's official opening.

It has been a long pre-season for the Hammers, including a Europa League play-off, but all the results haven't necessarily been positive.

Bilic has made some significant singings in the transfer market, signing seven players as well as breaking their club transfer fee for Andre Ayew.

They have moved over to Stratford in the new London Stadium, and will be looking to better that in their new home.

Last season was one of the best in the Hammers' Premier League history, finishing seventh in their final campaign at the historic Boleyn Ground.

It also set to be a historic season for West Ham United, as Slaven Bilic looks to better last season's heroics in their new surroundings.

The Blues have shown great progress in pre-season, with four victories, with their latest result being the 4-2 win over Werder Bremen.

Conte jumped straight into his new role having lead Italy to Euro 2016, and has made his impact on the side, with the signings of N'Golo Kante and Michy Batshuayi.

It shouldn't be difficult, as last season was arguably the Blues' worst since the arrival of Roman Abramovich, going from champions to finishing 10th; which ultimately cost Jose Mouriho his job.

A new revolution at Stamford Bridge is back around again, this time with Antonio Conte now in charge, and the Italian will be tasked in improving on last season.

Hi, everyone! I am Danial Kennedy, and welcome to VAVEL's coverage of the first Monday night match of the season between Chelsea and West Ham United. Kick-off is set for 8pm at Stamford Bridge, so stick around for build-up and team news until then.

West Ham United vs Everton:&nbsp;How to watch, kick-off time, team news, predicted lineups and ones to watch&nbsp; 2 months ago

West Ham United vs Chelsea:&nbsp;How to watch, kick-off time, team news, predicted lineups and ones to watch&nbsp; 2 months ago

Wolverhampton Wanderers vs West Ham United: How to watch, kick-off time, team news, predicted lineups and ones to watch&nbsp; 2 months ago
//