West Bromwich Albion continued their brilliant start to the Premier League season as they dispatched of Watford at the Hawthorns on Saturday afternoon.

Jonny Evans opened the scoring for the hosts after 15 minutes when he met Chris Brunt’s corner to head past the flat-footed Heurelho Gomes.

Brunt doubled the advantage when his shot deflected past the Watford ‘keeper less than 20 minutes later.

A Christian Kabasele tap in looked to have given Watford a route back into the match but Roberto Pereyra’s sending off made it difficult for the visitors.

Matt Phillips ultimately secured the three points for Tony Pulis’ side as his shot curled round the goalkeeper.

Prior to kick-off, fans and players wonderfully observed a minute’s silence in memory of the devastating air disaster in Colombia.

The Hornets travelled to the Midlands after being stung at home to Stoke City last weekend. Walter Mazzarri’s side looked to get back to winning ways in their best start to a top-flight season since the Graham Taylor era and were quick to dispel unwanted tags of ‘lethargic’ and ‘undisciplined’.

Nordin Amrabat’s fine form of late resulted in a nomination for Premier League PFA's Player of the Month Award for November and proved a handful for West Brom’s imposing back line throughout the afternoon. The winger forced Ben Foster into a save minutes after the first whistle as his clever footwork allowed him the space to unleash a powerful effort from a tight angle.

When the home side did come forward, however, they were able to cause Watford’s back three trouble out wide. The impressive Matt Philips had joy cutting inside from the left but neither his curling effort or attempted link-up play with Solomon Rondon resulted in the opening goal.

That accolade went to centre-back Jonny Evans after a quarter of an hour when the Baggies, rather unsurprisingly, capitalised on a corner. No other side in the division has currently scored via more set pieces than West Brom this term and Watford were shockingly caught napping after full-back Craig Dawson did well to win the corner.

Christian Kabasele received ironic jeers at Vicarage Road last Saturday when he replaced the injured Younes Kaboul, forcing his side to play with 10 men with his attentions elsewhere. The away supporters failed to see the humour when the defender’s complacency allowed Evans to rise unchallenged in the penalty area and subsequently give Tony Pulis’ side the lead. 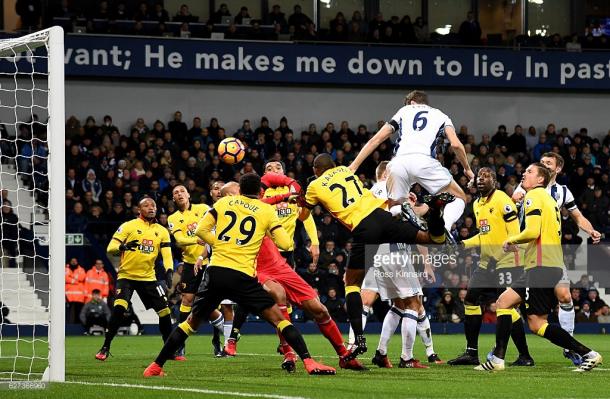 The hosts managed to double their lead 10 minutes before the interval courtesy of a deflected Chris Brunt strike from outside of the area. James Morrison’s lay-off presented his long-serving team-mate with the opportunity to score and the Northern Ireland international took it when his sweet strike deflected off Zuniga and crept past the stranded Gomes.

With both of these teams exceeding expectations in the league, it was always unlikely that the game would end 2-0. Troy Deeney benefitted from further trickery from Amrabat, who seemed to his enjoy his afternoon, but the captain’s effort was well blocked by last week’s hero - Gareth McAuley.

Watford were coming closer to reducing the deficit. Ben Foster had his reflexes severely tested on the hour mark when he back-peddled to tip over a deflected cross, saving Craig Dawson’s blushes. Unfortunately for the former Watford shot-stopper, the resulting corner fell to the feet of Christian Kabasele – who tapped home his first goal for the Hertfordshire outfit from close range.

The Yellows continued to take the game to West Brom with the latter dropping deeper as the clock ran down. Following a shot from Matt Philips that curled agonisingly wide, Foster was called into action once more when Deeney’s knock down set Roberto Pereyra through on goal. The ex-Juventus forward was outdone by the onrushing Foster, who tipped the ball away from the attacker.

Foster kept his side ahead as he once again made a vital save in what was a truly entertaining period of the game. This was unfortunately interrupted by a huge touchline brawl that had substitute James McClean and Pereyra at the heart of it. The Argentine was sent off by referee Graham Scott, who had to produce his first red card of the season, while McClean and Deeney escaped with yellows. 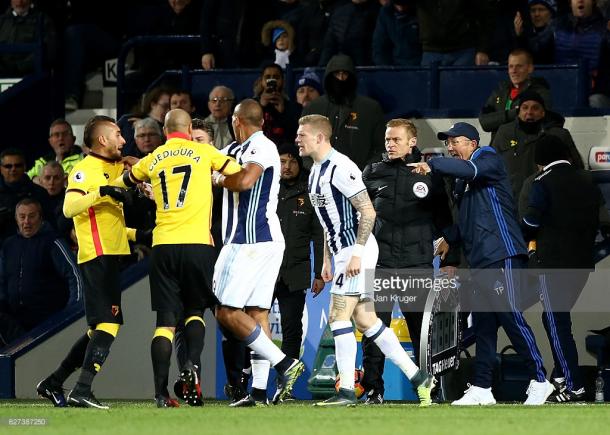 What looked a monumental task for the visitors became an impossible one when Matt Phillips secured the three points with a quite brilliant goal. The Scotsman was able to curl the ball round Gomes from the periphery of the penalty area after a fantastic run. The six minutes stoppage time that had just been announced had just been made a lot easier for the home crowd.

The result means that Albion climb to sixth in the league after leapfrogging their opponents while Watford move down to tenth. West Brom will look to continue their run of form when they travel to leaders Chelsea and Watford will look to bounce back from two successive defeats at home to Everton. 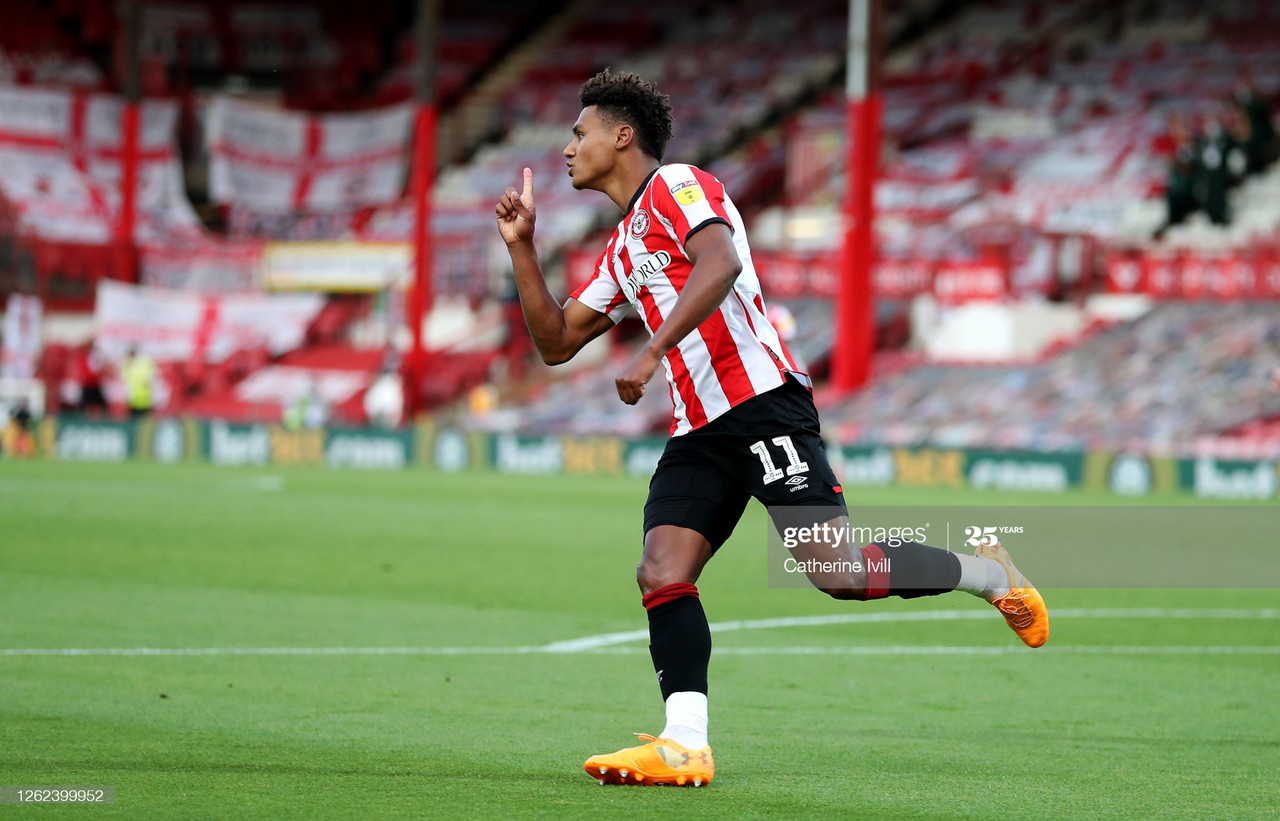