Newcastle United will face their last pre-season test on Saturday with Steve Bruce set to take charge of his first game at St. James’ Park, his side will face Ligue 1 side AS Saint-Etienne with kick-off at 15:00 BST.

The Magpies have had an inconsistent pre-season so far, with defeats to Wolverhampton Wanderers and Preston North End contrasted with victories over West Ham United and Hibernian.

This is the final fixture before their Premier League campaign kicks-off next weekend where they will face Arsenal.

Newcastle fans will be delighted to see goalkeeper Martin Dubravka return to action, he has only played 90 minutes this pre-season, but Steve Bruce has confirmed that he will play in this one and reiterated that he will not be sold amid interest from Paris St-Germain.

Matt Ritchie is a doubt going into this game after picking up a hamstring injury in the game against Hibs, the manager has confirmed that he has had a scan and they will know more on the severity of the injury soon.

Bruce has also confirmed ahead of the Saint-Etienne game that Ciaran Clark will not be leaving the club.

Elsewhere, Miguel Almiron is set to make his first appearance at St. James’ Park since picking up an injury in April, whilst DeAndre Yedlin, who has not made an appearance since last season after requiring surgery on a groin issue, is not set to be back for this game. 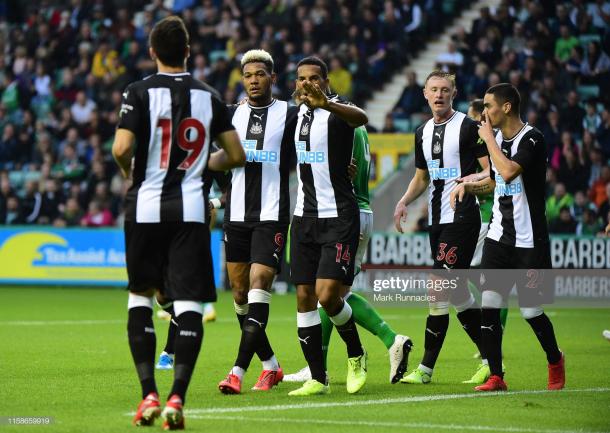 A look at the opposition

Saint-Etienne had an impressive season last time out in Ligue 1, finishing in fourth position. As a result, they qualified for the group stages of the UEFA Europa League, just six points of a UEFA Champions League spot and nine points of second place behind Paris Saint Germain who ran away comfortable winners as usual.

Saint Etienne were a dominant force in France throughout the seventies and to this day have won more league titles than PSG.

Former Newcastle man Mathieu Debuchy plays for the French side and could make a return to St James’ Park on Saturday.

They are unbeaten in their pre-season so far, including a 1-1 draw against another North East side in Middlesbrough last Sunday.

Speaking before the final friendly game of this campaign, Fabian Schar was asked about his side’s pre-season performances so far, he said:

“I think the first game wasn’t very good but we have worked on it and we have improved a lot so we cannot take these results to serious.

I feel good, I feel ready to play and I think it is also good to play 90 minutes to see that you are fit”.

He also admitted that Saturday’s opposition will be a good final test before the start of the Premier League, he said:

“It is going to be a really hard test; I think they are a good team who play really good football with good individual players.

It’s the best to play at home and hopefully the fans come, its just a friendly but now we are going for the start [of the Premier League] and we need all the people there, it is always important for us to have the fans behind us like we have all the time whether we play home or away”.

Saint-Etienne have a few players that many Newcastle fans watching the game will be aware of, such as Stéphane Ruffier, ex Sunderland man Wahbi Khazri and of course Debuchy.

But, the player to watch for the French side is William Saliba, the talented French under-19 international will be recognised by many after he signed for Arsenal earlier this summer for £27 million.

He is seen as one of the best young defender's at this moment and will be playing Premier League football next season.

As for Newcastle, the home faithful will be excited to see their new striker Joelinton in action.

The 22-year-old Brazilian arrived from TSG 1899 Hoffenheim for a deal worth around £40 million and has already scored his first goal for the club, in Newcastle's 3-1 victory over Hibs.

Newcastle United season review 2019/20: A season of discontent ended in a comfortable finish9 days ago

Ramage returns to Tyneside in under 23s role15 days ago