The beginning of the Moto2 and Moto3 season got underway on Thursday as the 600cc and 250cc class took to the track for two sessions of Free Practice at the Losail International Circuit in Qatar. They returned on Friday evening for one more Free Practice session, but on Qualifying day, it rained and all sessions were canceled meaning the combined times have been used to determine grid positions ahead of the opening round of the 2017 season.

Saturday sessions canceled due to rain and surface water

Following on from a Safety Commission meeting on Friday night, it was determined that it was unsafe to continue with proceedings should it rain for many reasons. Waiting patiently in the pit garages, as track officials and marshals did what they could to remove surface water from the track and the surrounding artificial grass areas the riders and teams looked on as prior to them going out, the MotoGP class were to complete Free Practice 4.

It never occurred however, but another light rain shower did and eventually the day had to be abandoned as their best efforts were falling short of acceptable conditions. Things are run during the evening in Qatar under floodlights. This already causes many problems in itself as despite the temperatures being cooler, riders have to deal with the shadows on track.

Introduce rain and not only would they then have to deal with the reflection and glare, they will have to contend with the spray from the bikes in front which will also reduce visibility dramatically. It is considered too dangerous to race in these conditions in Qatar.

Qualifying positions to be determined from Combined Free Practice results

As a result, the combined times from the previous Free Practice sessions for both classes have been used to determine the positions on the grid.

In the 600cc class, it is the Estrella Galicia 0,0 Marc VDS teammates leading the way as Franco Morbidelli has secured pole and Alex Marquez will line up beside him in second. They will be joined by Thomas Luthi (CarXpert Interwetten) who won the opening round of the Moto2 season back in 2016.

Leading the second row will be Takaaki Nakagmi on the Idemitsu Honda Team Asia Kalex in fourth. Miguel Oliveira has joined his own team from the Moto3 class, Red Bull KTM Ajo who have decided to expand to the Moto2 class for the 2071 season, will start in fifth. British rider Danny Kent will line up beside him on his Kiefer Racing Suter after ending up sixth quickest.

His teammate, Dominique Aegerter (Kiefer Racing) will lead the third row in seventh ahead of the quickest Tech 3 rider, Xavi Vierge (Tech 3 Racing) in eighth. Francesco Bagnaia was one of several Moto3 riders to be promoted to the Moto2 class. Bagnaia's riding for the Sky Racing Team VR46 who have also decided to expand into the 600cc class; he completes the third row in ninth.

Fabio Quartararo is the second quickest rookie on the Pons HP40 Kalex, he will start ahead of Mattia Pasini who remained with the Italtrans Racing Team in 11th and Axel Pons is 12th with his new team, RW Racing GP. The remainder of the club is as follows: 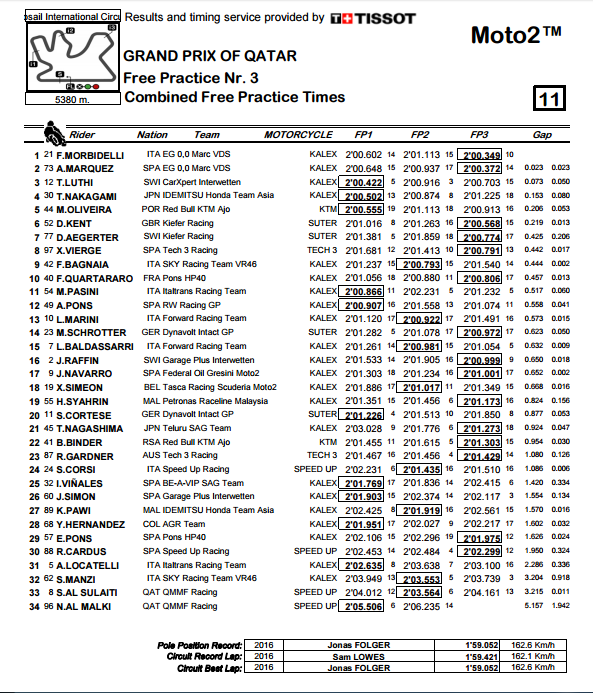 Martin on pole in the Moto3 class

In the Moto3 class it is Jorge Martin on the Del Conca Gresini Moto3 team that will lead the grid should the 250cc race go ahead at Qatar. He will be joined on the front row by Phillip Oettl whose fastest time during FP1 was enough to secure him second on the grid with Sudmentall Schedl GP Racing. They will be joined by Marinelli Rivacold Snipers team rider Romano Fenati, who is returning to the Moto3 class as he was sacked by the Sky Racing VR46 team midway through the 2016 season; the Italian completes the front row in third.

The Moto3 championship winning team Red Bull KTM Ajo are the next two riders on the grid, Bo Bendsneyder is fourth ahead of his new teammate Nicollo Antonelli. Leopard Racing team rider Joan Mir joins them in sixth.

Andrea Migno (Sky Racing Team VR46), leads row three in seventh. Next to him is Aron Canet who has remained with the Estrella Galicia 0,0 team. Unfortunately for Gabriel Rodrigo (RBA ROE Racing Team) crashed during the first day of Free Practice and has been ruled out of the opening round with a broken collarbone. Instead his teammate Juanfran Guevara will start from ninth on the grid completing the third row. Al the other riders will therefore move up a position on the grid which will be as the following: 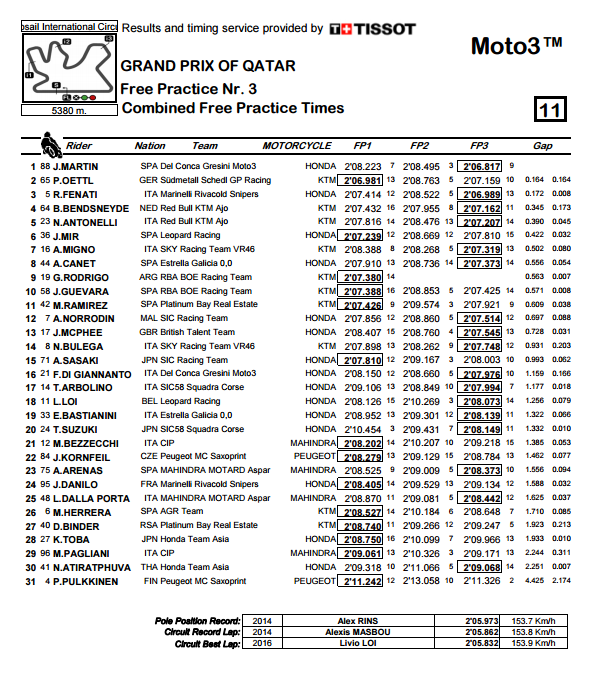 The question is, will the race go ahead? The conditions have been expected hence the Safety Commission meeting to determine what should occur should it rain. Only time will tell.

Eifel GP Preview - Who will prevail as F1 returns to Germany? 11 days ago