Thank you for continuing to follow Tijuana vs América in the Guard1anes 2021 tournament. See you next time.
12:00 AM2 months ago

They remain as runners-up

Tijuana did not have a good night and were beaten 2-0 by America, who remain in second place overall after Cruz Azul's win.
11:59 PM2 months ago

Escoboza and Viñas come in.

Aquino and Lainez come off.

Cortizo falls inside the area and the referee makes no booking.
11:48 PM2 months ago

Orozco gives away the rebound and Martín finishes easily to increase the lead.

López came on and Guzmán came off in Xolos' last change of the night.
11:41 PM2 months ago

Gómez and Cortizo come in

The VAR rectifies its decision and indicates that there is no handball and the goal is scored.

Goal disallowed for a previous handball inside the area.
11:27 PM2 months ago

Roger Martínez makes the cut back and fires a shot that goes wide. America are coming closer.
11:26 PM2 months ago

Naveda with a mid-range shot that goes over the top.
11:26 PM2 months ago

A double bicycle kick that América was attempting inside the area is cleared by Tijuana.
11:19 PM2 months ago

Martinez's header from a corner is deflected by Orozco.
11:16 PM2 months ago

Aquino's shot sent Orozco flying into the air and out for a corner.
11:13 PM2 months ago

Pavez's long-range shot is saved by Ochoa, who for the first time on the night gets to work.
11:11 PM2 months ago 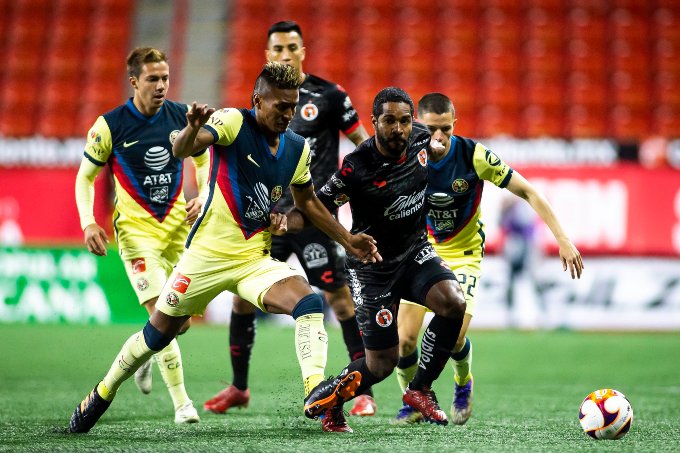 The referee does not add anything and we go to half time: Tijuana 0-0 América.
10:48 PM2 months ago

Fidel Martínez was offside and Xolos' dangerous play was over.
10:44 PM2 months ago

The game still lacks clarity, with Xolos now balanced in midfield, but still not dangerous.
10:38 PM2 months ago

Manotas's shot from half distance goes wide.
10:36 PM2 months ago

Roger tried to run down the left, but was closed down by two players and robbed of the ball.
10:22 PM2 months ago

Roger is fouled to stop the counter-attack and America are awarded a direct free kick.
10:19 PM2 months ago

Martinez with a cross inside the six-yard box that is blocked by the defence.
10:17 PM2 months ago

Córdova had sent in a cross that nobody closed down at the far post.
10:14 PM2 months ago

Cáceres tried to comb the ball in at the near post, but the defender crossed for a corner.
10:11 PM2 months ago

America went all out in the first few minutes and took the ball in their opponents' territory, having already had a clear chance.
10:07 PM2 months ago

Roger Martínez's shot is saved by Orozco for the first of the night.
10:06 PM2 months ago

In Liga MX protocol, Xolos and America take the field.
10:02 PM2 months ago

We are minutes away from the start of Tijuana vs America, don't miss the coverage of the game.
9:57 PM2 months ago

If Tijuana beats América, it would not only beat them, but also unseat them from third place in the Guard1anes 2021 tournament.
9:41 PM2 months ago

In the rain, America jumps to warm up

They go to the bank

Martín and Viñas, who is registered, will be on the bench waiting for their chance on Santiago Solari's bench.
9:36 PM2 months ago

Here's how America warms up

Depending on tonight's results, America could emerge as leaders if they win and Cruz Azul lose to Mazatlan.
9:23 PM2 months ago

Xolos will wear all black tonight and America will wear the traditional yellow uniform.
9:21 PM2 months ago

América had no major problems in defeating the Tuzos of Pachuca 2-0 last Saturday.
9:18 PM2 months ago

Tijuana is coming off a late 1-1 draw against Rayados de Monterrey.
9:14 PM2 months ago

Richard Sanchez will not be available for this game because he was sent off in the game against Pachuca.
9:12 PM2 months ago

How to get there 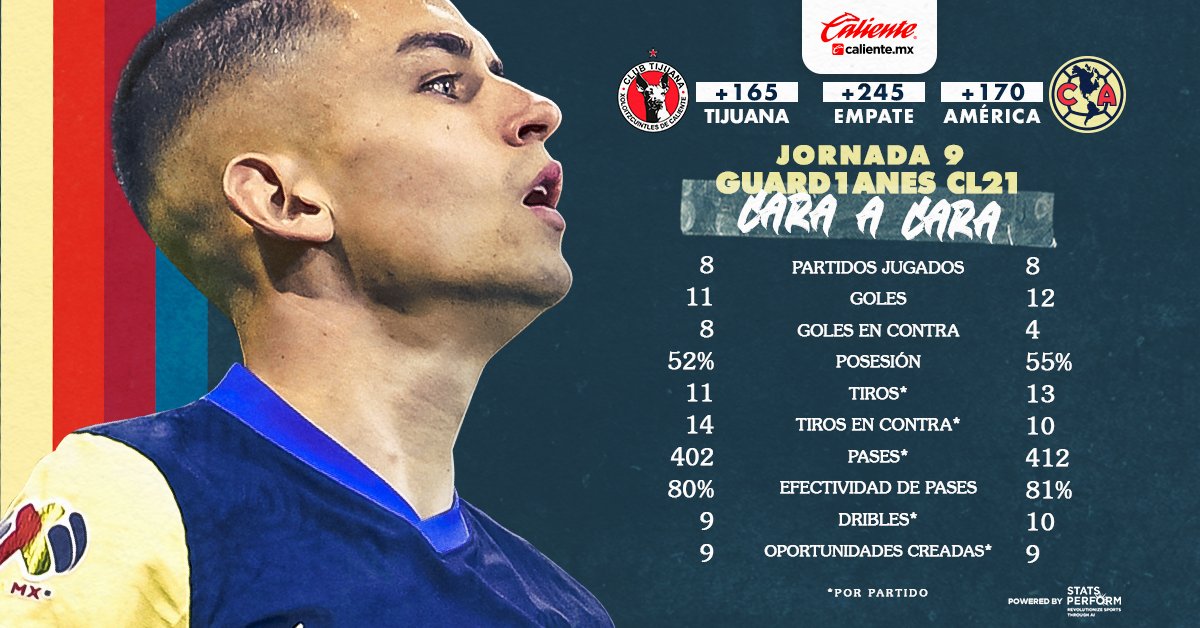 This is how they arrived at the stadium

Guillermo Ochoa and América arrived at the Estadio Caliente to return to winning ways on the road. 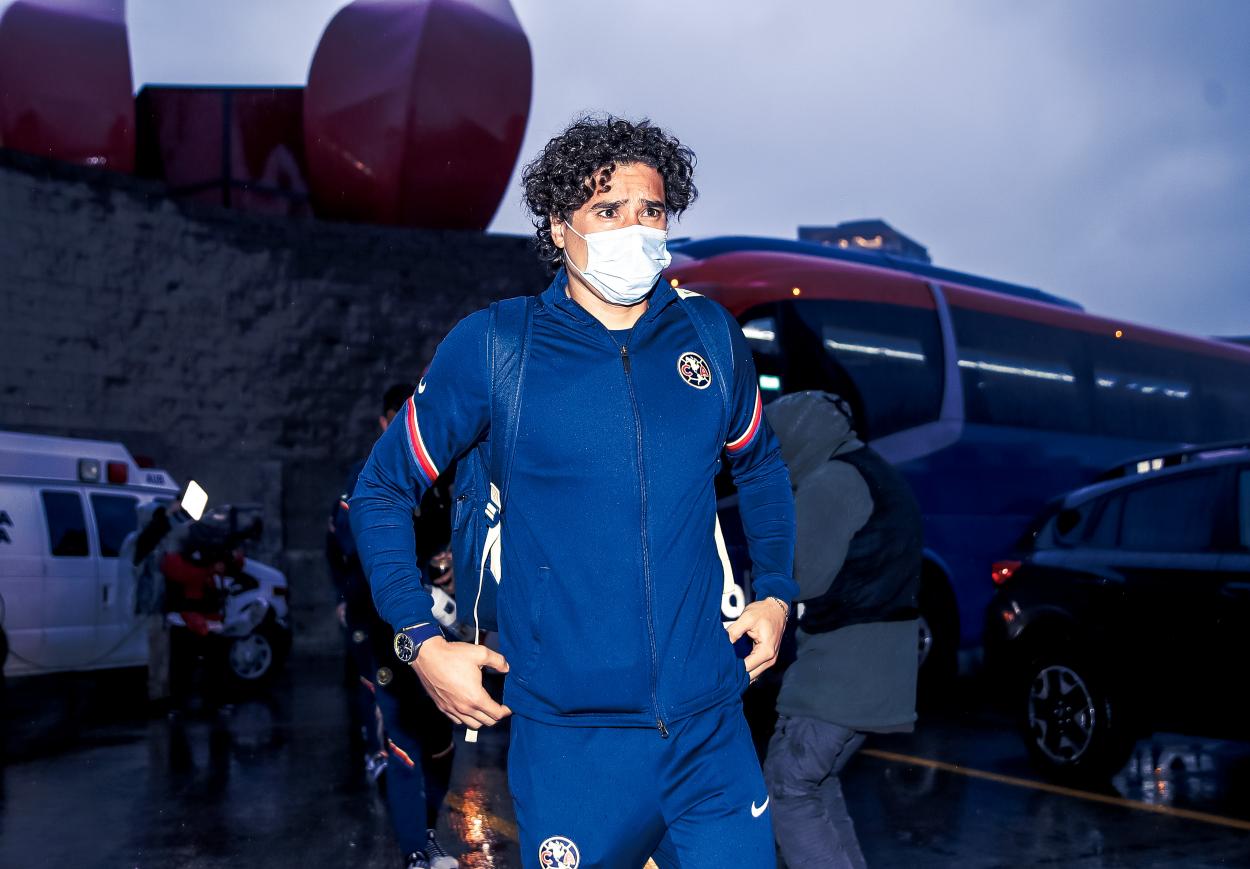 In the Under-20 category, América won by the slimmest of margins against Xolos de Tijuana at the Caliente Stadium. 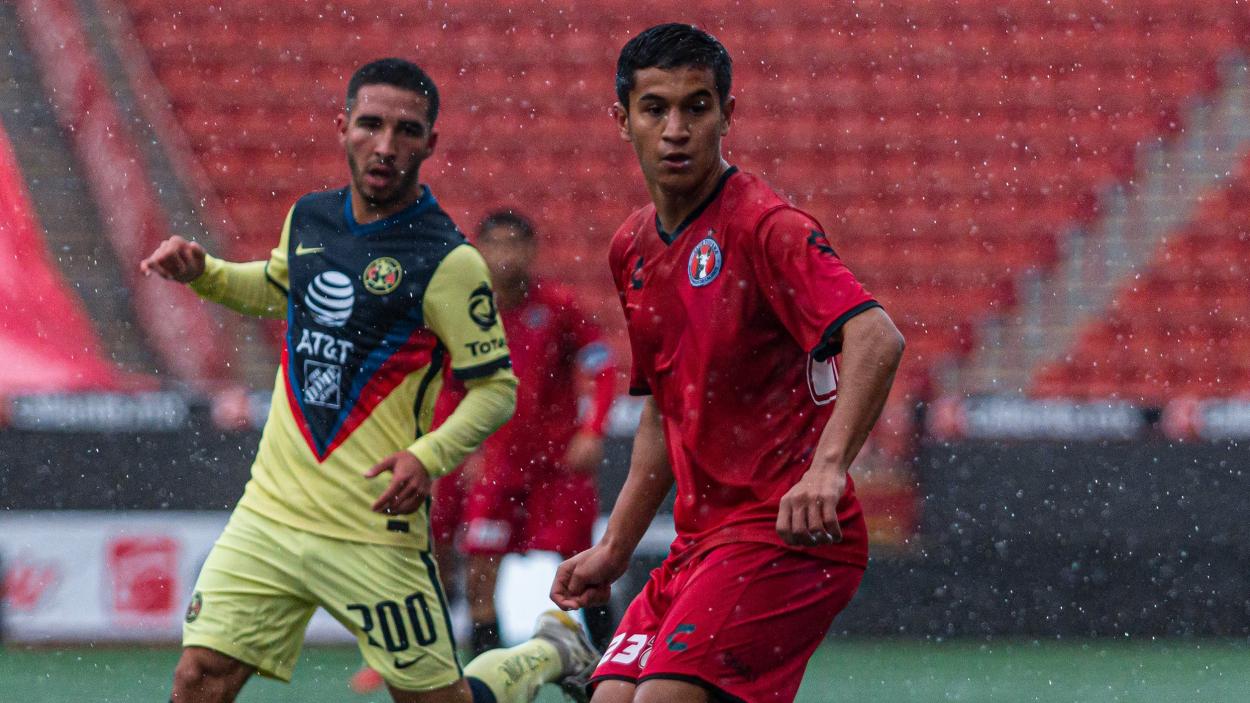 A duel at the top of the overall standings when the Xolos de Tijuana host the Águilas del América in the Guard1anes 2021 tournament. We begin.
2:34 PM2 months ago

Do not miss a detail of the match with the live updates and commentaries of VAVEL. Follow along with us all the details, commentaries, analysis and lineups for this Xolos Tijuana vs América match.
2:29 PM2 months ago

The balance in the last five games at the border has been very even, with one win each side and three draws; the most recent match took place in the Clausura 2020 with a 0-0 draw. 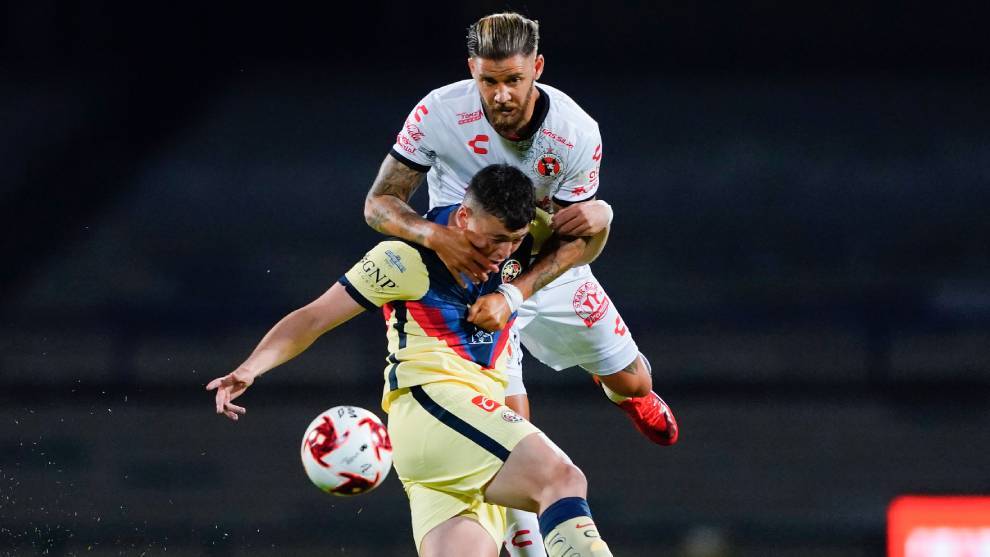 How to watch Xolos Tijuana vs América Live TV and Stream

He has only played a few games, but Alvaro Fidalgo has had good performances in the midfield, highlighting his precision in his passes to generate goal-scoring plays. 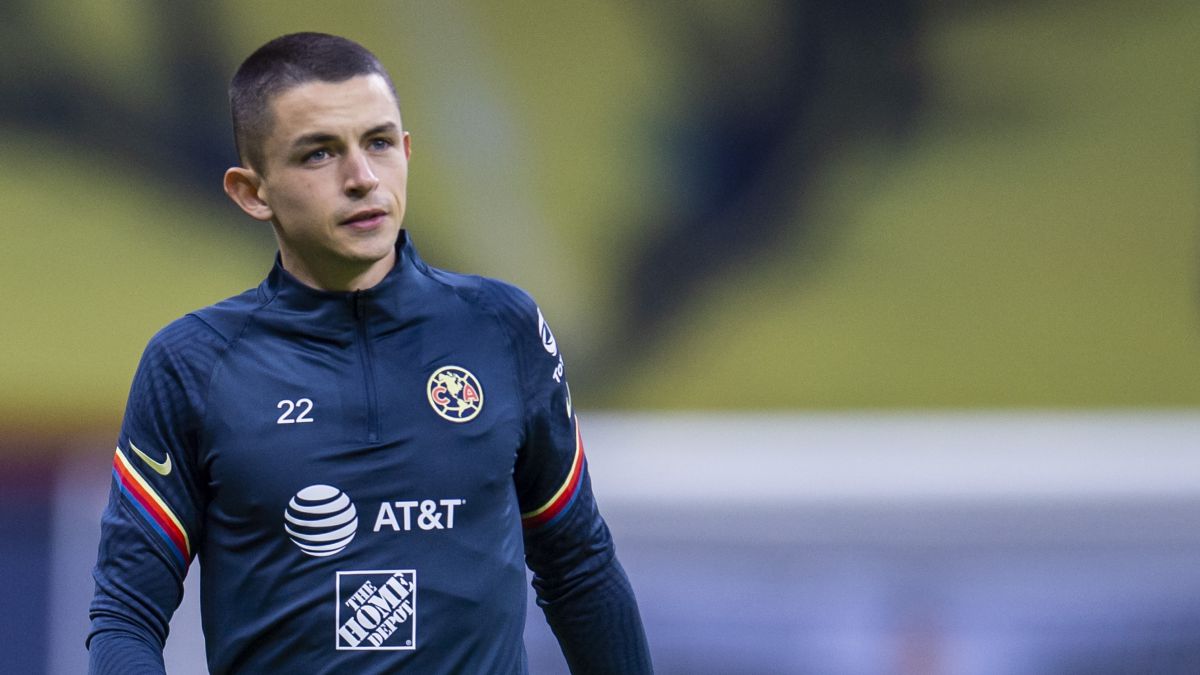 Ecuadorian Fidel Martínez is the team's leading scorer with four goals, and is one of the main players in the attacking zone. 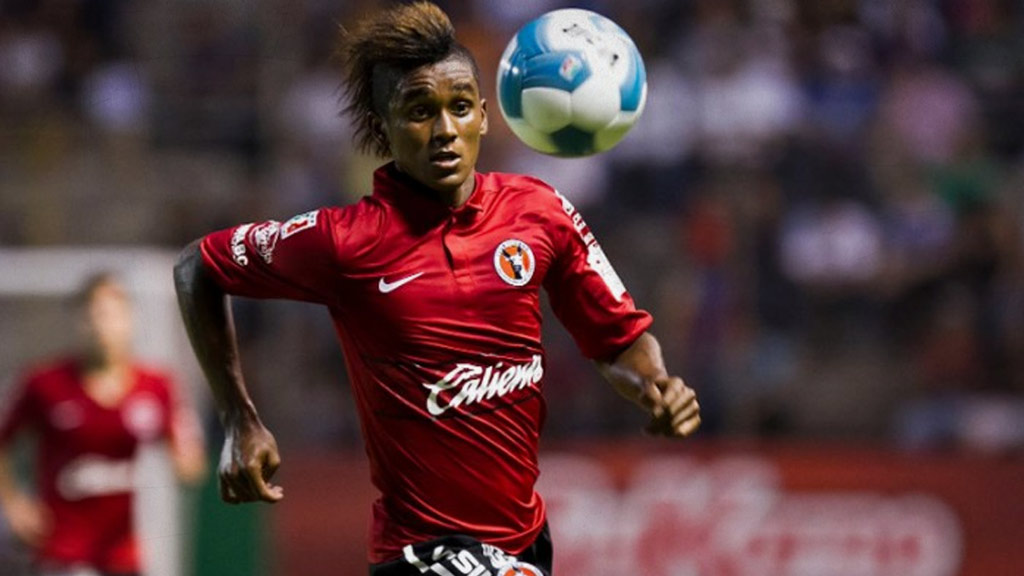 Referee for Xolos Tijuana vs América

The referee for Xolos Tijuana vs América will be Óscar Mejía García.
2:04 PM2 months ago

Although the results with Santiago Solari have been good, the soccer performance does not convince everyone, so this Wednesday they will go out with the mission to win and to please to silence their critics.
1:49 PM2 months ago

Tijuana: to turn their home into a fortress

After two away games in which they barely managed to salvage a point, the Xolos have the litmus test of retaining their unbeaten home record against America.
1:44 PM2 months ago

The Xolos Tijuana vs America match will be played at the stadium Caliente, in Tijuana. The kick-off is scheduled at 10:06pm ET.
1:39 PM2 months ago