Moeen Ali has put England in a commanding position at the end of day three of the fourth Test against South Africa as the hosts ended play on 224-8 with a lead of 360 runs in Manchester.

On a beautiful sunny morning at the Emirates Old Trafford, the hosts didn't take long to get the final wicket of the Proteas innings as they were bowled out for 226 giving the home side a lead of 136 runs.

Batting a second time, the hosts lost a number of wickets early on but Ali counter-attacked brilliantly as he ended the day on 67 not out. The hosts finished the day on 224-8 with a lead of 360 with two days remaining in the Test series.

The Proteas started day three on 220-9, 142 runs behind the hosts' first innings score and it didn't take long for England to wrap up the innings in the morning.

Stuart Broad took the final wicket of the innings when he dismissed Duanne Olivier for four to bowl the visitors out for 226 which gave the home side a lead of 136 after both first innings.

England then began their second innings but it didn't get off to a great start when Mourne Morkel removed Alistair Cook for 10 early on.

It meant that Tom Westley and Keaton Jennings came together in the middle and just as they started to build a partnership, Morkel ended it when he removed Westley for nine to leave England on 30-2.

Joe Root though, as he normally does, calmed things down until lunch and alongside Jennings the pair got England to 53-2 at lunch with the lead standing at 189 runs. 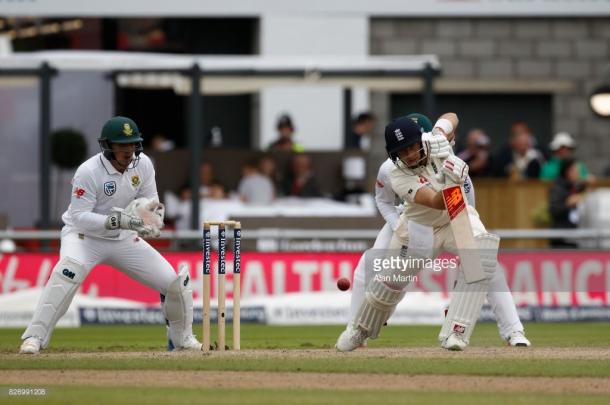 After lunch though, the visitors continued to take wickets as Kegiso Rabada removed Jennings for 18 and then Keshav Maharaj removed Dawid Malan for six to leave England reeling on 72-4.

However, Root alongside Ben Stokes put on a half-century partnership for the fifth wicket and just as it looked like the England captain would score his own half-century, Olivier removed him for 49.

Stokes then fell soon after for 23 as Olivier got his second wicket of the innings to leave England struggling at 134-6.

The hosts managed to get to tea though without losing any more wickets as they finished the session on 138-6 with the lead now at 274 but they knew they needed more to be safe in the game.​

After tea, it was clear that the hosts wanted to be more attacking but that brought yet another wicket when Olivier removed Jonny Bairstow for 10.

Ali though was still at the crease and alongside Toby Roland-Jones, the pair put on 58 for the eighth wicket with Ali going past his own half-century with some beautiful shots.

The partnership was ended though when Rabada removed Roland-Jones for 10 much to the relief of the visitors.

Ali continued to take the attack to the opposition and it was paying off in a great way as the hosts took their lead passed the 350 mark.