It was an amazing fixture between the two teams as we kicked off this season's Premier League. Arsenal hosted Leicester City and the hosts came out victorious - just.

However, in this game of many goals, who came out on top in the Arsenal camp?

As seen in the previous game, Cech was deployed as a sweeper keeper. His leadership skills were eye-catching however he didn't do enough when he was tested.

He got the assist for Danny Welbeck's goal and shown great determination to win the ball back in the opposition's half as well as coming close himself a few times.

Despite him scoring two, Nacho did well to retain Jamie Vardy and prevent him from having more chances than he perhaps should. It wasn't his most comfortable position but he improvised.

Despite showing great form at the back end of last season, the youngster was the cause of a lot of Arsenal's defensive frailties tonight.

His play was positive however he didn't seem comfortable receiving possession and he often tried to do too much in the attacking third.

Even when Arsenal were trailing, the Swiss international was the star man in the heart of Arsenal's midfield. He kicked off his season with a bang by securing his first two assists.

He wasn't as good as he should have been and if it wasn't for his counterpart in Xhaka then we would be looking down on his performance a lot more.

He looked bright and confident in possession, always looking to bring the ball forward and supply the attackers. Although, he did have a lot of wasteful shots. 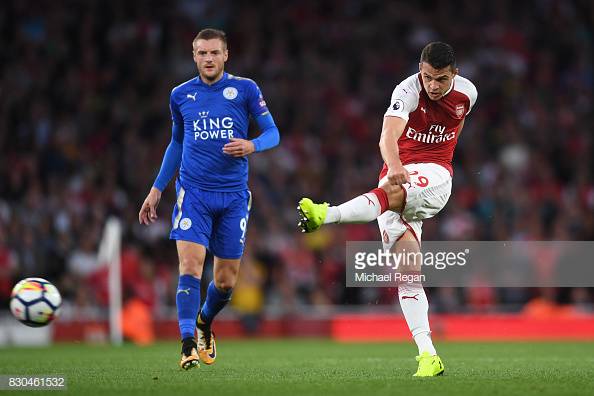 He dropped in to midfield a lot and was always looking to turn defence in to attack however a lot of his passes went astray and he'll be looking to improve against Stoke.

He looked bright in possession and he scored this seasons first goal within the space of 2 minutes. He got stuck in a lot more than he did in pre-season.

His interplay with Lacazette was phenomenal and he managed to bag himself a goal before the first half. He was always looking like a problem to the deep sitting Leicester defence.

He made an instant impact and showed his spatial awareness once more however it didn't result in a goal. He did manage to find the net though and it sparked a late comeback for Arsenal.

He showed Arsene Wenger once again why it's important not to sell him. He came on and bullied the worn-out Leicester defence to win the game for his side once again.

He didn't feature enough to receive a rating.

Rapid Wien vs Arsenal preview: How to watch, kick-off time, team news, predicted lineups and ones to watch 2 days ago

Xhaka and Partey: A great midfield duo? a day ago

Will this finally be the year Arsenal win the Europa League? 2 days ago

Pierre Emerick-Aubameyang: Slow start is nothing to worry about 5 days ago