Manchester United left-back Luke Shaw says his return from injury was "very pleasing" as the young Englishman played for his club's under-23 side on Monday night.

Both Shaw and Ashley Young played 60 minutes for Man United's youth team in a 1-1 draw against Swansea City in Premier League 2. Shaw, 21, was playing his first game since April 30 while Young hadn't been in action since May 4.

Shaw's future at United has come into question over the past season, falling out of favour and being publicly criticised by manager José Mourinho. But reports in the last week suggested United were preparing to offer the full-back a new one-year contract extension.

Speaking to the club's official television channel, MUTV, after Monday's under-23 game, Shaw said returning from injury was "very pleasing." 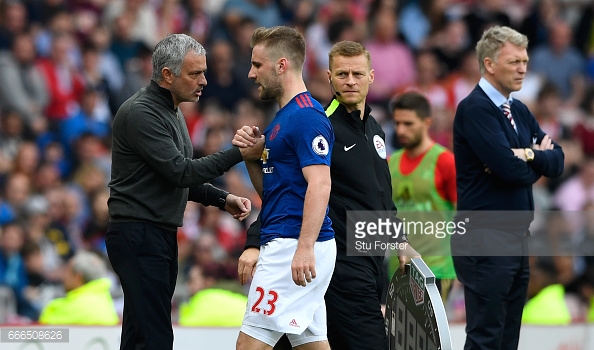 Shaw: I have my eyes on the first team spot

Shaw returned to training earlier than the rest of his teammates to ensure his recovery could be as quick as possible.

“I’m looking for the first team spot now," he said. "I’m going to keep pushing and when the manager needs me I’m going to be ready. Whenever that is, I’m really looking forward to it and rather sooner than later.” In an effort to convey how he felt about his fitness, the defender added, “Now I’m feeling really good and when I get called upon I’m ready.”

It's worth bearing in mind that Shaw's career remains in its infancy. He's had a few rocky seasons at United, including a leg break just as he was getting into some superb form under Louis van Gaal. But at 21, there are many years left for him to prove himself at Old Trafford.

Mourinho took Shaw, Young and other injured players such as Marcos Rojo to the UEFA Europa League Final, and also on the club's pre-season tour of the USA as well as the UEFA Super Cup against Real Madrid, as he attempts to foster a good dressing room.

Four Jadon Sancho alternatives&nbsp; Manchester United could sign from the Bundesliga 6 hours ago

The Warmdown: Man United put in team performance to win in Paris 6 days ago