Sheffield Wednesday’s fight for Championship survival resumes on Good Friday with a trip to promotion-chasing Watford.

Their battle was ignited before the international break with victory over local rivals Barnsley, a Jordan Rhodes double earning a vital win to reduce the gap to safety to six points.

It still remains a tall order to avoid the drop into League One with nine matches remaining, but manager Darren Moore remained in confident mood speaking to the media ahead of the Watford clash.

Moore has had to contend with a lengthy injury list since taking charge of Wednesday, but there are signs of things picking up with a number of players back in training and no fresh concerns reported.

The trio of Sam Hutchinson, Fisayo Dele-Bashiru and Joost van Aken are all back and could be available for selection as soon as the Watford match, though Moore emphasised work was still needed with them.

“All of them are back on the training ground so it’s just a matter of getting some training into them,” he said. “Hopefully that’s more competition for places.”

On Dutch defender van Aken, who has been out with a groin injury since December, Moore added: “To have him back is really good, simply because he’s a central defender, and he’s left-footed so he brings balance to the team.”

Celtic-bound midfielder Liam Shaw is available having been left out of the squad against Barnsley as a precaution with a hamstring niggle.

First-choice goalkeeper Keiren Westwood is also back in training, although Moore conceded “it may be” too soon for him to play at Vicarage Road, following a recurrence in the warm-up at Barnsley of a previous rib problem.

“Westy’s been back in training and we’re putting him through his paces,” said the boss. “The pleasing thing for Westy is the injury has healed now; it’s just getting confidence back in, making diving saves, coming for catches and things like that.

“We’ll assess him again later on today (Thursday) and see how he’s doing but he’s back on the training pitch and we’re putting him through his paces at the moment.”

The prospects are not quite as bright for some other members of the squad though, with Moore revealing that Cameron Dawson and Moses Odubajo are unlikely to feature again this season.

Goalkeeper Dawson has been absent since December with a knee problem while full-back Odubajo suffered a hamstring injury in January, but both are facing a battle to be involved again in this campaign, alongside midfielder Massimo Luongo.

Of the first two, Moore said: “Those two I think will probbaly be back on the training ground running in the next two or three weeks.

“By the time they get to any level of fitness the (end of the) season will probably be nearly upon us. They’re making good progress but in terms of contributing to this season it looks unlikely.”

He added: “Massimo is another long-term injury but he’s doing really well. He’s another player that continues rehab and in weeks to come he can hopefully step through the door and get back on the grass.”

There are few tougher tests in the Championship at the moment than Xisco Munoz’s Watford, who have nine of their past 10 matches to rest in the automatic promotion places.

“We know the opposition we’ll face and tomorrow is another tough test for us,” said Moore. “We have to make sure that we’re operating at our best and trying to build on the performances we had just before the international break.

“They’re a top, top team at this level and the run they’re on speaks for itself. We need to make sure we continue building on performances which saw us finish the week before the international break strong and positive.

“We’ve had some time to work and we have to be at our absolute best if we are to take anything from the game tomorrow.”

On the international break

The recent break from Championship action for international fixtures has given Moore, still only a month into his tenure at Hillsborough, some quality time to work with his squad.

Of what they have been working on, he said: “It’s been loads of parts to the game, areas out of possession and on the ball, individual practices. There’s a lot that we’ve tried to squeeze into this 8-10 day window.

“It’s been a great week. It’s been great for me to know the players more, get that repetition. It’s been good to have some real good time with them and get some work in.”

Moore confirmed that Wednesday would not be signing former Manchester United and Sheffield United midfielder Ravel Morrison, who had been training with the club last month. However, he did not rule out an approach for Morrison in the summer.

“Ravel did so well when he came in but I just felt at the time we were at we needed him to hit the ground running and it might have taken him a few weeks,” said Moore.

“The door is not closed on him, we’ve spoken. He’s not training here anymore but it’s something for the future, we’ll keep in touch with him.”

Stoke City vs Coventry City preview: How to watch, kick-off time, team news, predicted lineups and ones to watch 16 hours ago

Birmingham City vs Nottingham Forest preview: How to watch, team news, kick-off time, predicted lineups and ones to watch 2 days ago

Preston North End vs Derby County preview: How to watch, kick-off time, team news, predicted lineups and ones to watch 2 days ago

Warm Down: Huddersfield Town make a breakthrough in battle for survival 3 days ago 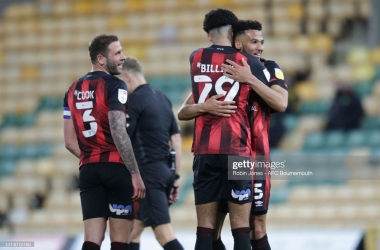