Gael Monfils, 29, has announced in a press conference that he will not play in Marseille Open due to injury he picked up in the Rotterdam final. The Frenchman has had a number of injuries througout his career, and played in the Rotterdam final against Martin Klizan this past Sunday, where he picked up a hamstring injury. With Marseille being only a day after the final, Monfils has not had suffienct amount of time to recover. As a reminder, he also missed Australian Open after picking up an injury in the 2015 International Premier Tennis League.

Comeback on the tour

With Monfils not playing Marseille, he will then head out to Guadeloupe where the French Davis Cup team will face Canada in round one. If he has not yet recovered, he could skip that and head to Indian Wells where the first Masters 1000 takes place. The Frenchman will lose 150 points, which he gained during last year's competition in which he lost in a third set tiebreak to Gilles Simon. His place in the draw was taken by Lucky Loser David Guez. The main contenders left in Marseille are: Stan Wawrinka, Tomas Berdych, Marin Cilic, Simon and Richard Gasquet.

With his injury Gael said, "I've got a pretty tight hamstring, I took the decision to not play in Marseille this year to be able to recover and prevent a longer-term injury, I already played strapped up in Rotterdam."

Gael also added that he was sad and disappointed to be missing the tournament and he also tried to run off the injury, but felt his hamstring was not 100%. He also said that there wasn't much he could do and assured the tournament directors that he will definitely be returning next year. 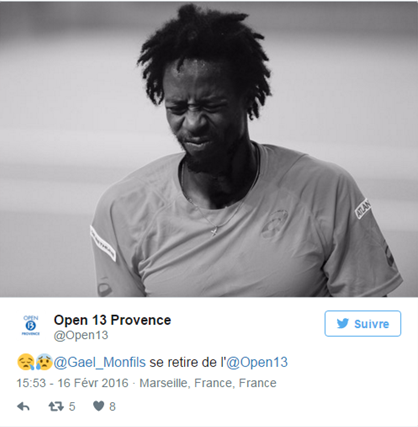