Qualifier and world number 95 Nicole Gibbs continued her great run of form on day six of the BNP Paribas Open at Indian Wells. The American took out compatriot and 23rd seed Madison Keys in straight sets, 6-3, 6-3 which lasted a total of one hour and 11 minutes. It was a quite comfortable win for the underdog who got a top 30 win over the world number 24.

Gibbs won 71 percent of first serve points and converted on four of seven break points. She was not broken all match and only faced one break point. With the victory the American goes on to face world number 72 Yaroslava Shvedova in the third round.

It was the first head-to-head between the two Americans. Keys was playing her first match of the tournament as she received a first round bye. Gibbs had a different route as she was forced to qualify into the main draw due to her lower ranking. The 23 year old was the 16th seed in the qualifying draw and won her first round of qualifying 7-5, 7-5 over world number 137 Viktorija Golubic. Her final round of qualifying was a challenging one as she went up against world number 61 and qualifying draw top seed Anna-Lena Friedsam. The American showed grit as she willed herself to victory 6-4, 5-7, 7-5 to qualify for the main draw. 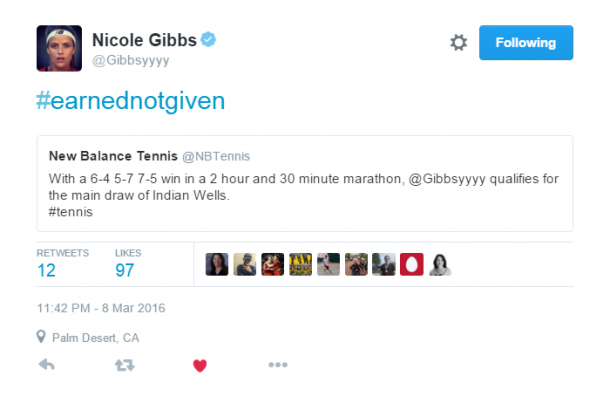 One of her best wins of her career came in the first round of the main draw as she completely dominated world number 93 Alexandra Dulgheru to a 6-1, 6-0 victory. Gibbs has been known to work extremely hard on improving her game which is helping her make steps in the right direction. It is clear the confidence from previous wins gave her the confidence to beat Keys effortlessly.

Gibbs has been an inspiration for young players who are trying to transition from the collegiate ranks to the WTA tour. The 23-year-old has won almost every single award in the book during her collegiate career for Stanford University. She was a repeat NCAA singles champion and collected an impressive (111-15) record in her three years of college singles play.

Here are highlights of the second round match:

Gibbs Takes Command Of The Match

The match started out quite equal on both sides of the court. Both players did not get a rhythm on their serves as they traded breaks. Gibbs and Keys only needed one break point opportunity to break each other right away. As the set wore on, the 23-year-old began to build on the form she has had for the last week with solid play from the baseline.

Her serve was not completely clicking as she won 55 percent of first serve points. The consistent return play from her put pressure on Keys and drew errors as they traded off cross court shots. Gibbs opened up the lead by winning three of four break point opportunities. She was able to hold and win the first set 6-3, having trailed 2-3 earlier in the set.

The second set got off on the right foot for the lower ranked American as she managed to hold for a 1-0 lead. Keys was not flustered from the great play of her opponent as she drew errors from the racquet of Gibbs. The 23rd seed held at love in the second game to get things level at 1-1.

Both players continued to hold as Gibbs used good offense and defense on the baseline to draw a backhand error from Keys to go up 3-2. She then took her chance to put pressure on the Keys serve. The qualifier played with high energy and dazzled on the backhand side as she kept her opponent back behind the baseline. On the return, the 23-year-old found opportunities to finish at net and was playing lights out with a focused mindset. She took a 40-0 lead on Keys' serve which gave her three chances to break. At 15-40, the world number 24 had a lapse of concentration with a double fault to give the break to Gibbs.

The qualifier made no doubt about finishing the job as she remained steady to hold successively for a 6-3 second set score and the straight sets win over a formidable opponent. The American faced no break points in the second set as she converted one of three break point opportunities. Gibbs looks to make the most of her rise in confidence as her draw opens up.