It was a big fourth day of main draw play at the Irving Tennis Classic (ITC) on Friday. The day featured four quarterfinal singles matches as well as one semifinal doubles match. The semifinal field is set in singles with defending champions Aljaz Bedene leading the way.

Defending champion Aljaz Bedene put his seven match win streak in Irving on the line in the quarterfinals on Friday. Bedene battled 18-year-old American Frances Tiafoe in a back and forth three set roller coaster. The first set saw both players broken twice. It was Tiafoe who struggled more on serve, winning just 62 percent of his first serve points. Bedene won 17 of 20 on his first serve, but only managed to get 48 percent of his first serves in play. It was a problem that plagued him on Thursday as well. That allowed Tiafoe to take 13 of 21 second serve points as the set weaved its way to a tiebreak. Bedene would steady himself and edge it, 7-5.

The second set saw a slight dip from Bedene, as he won just 64 percent of his first serve points. The Brit again was having a hard time consistently landing his first serve at just 53 percent for the set. That allowed Tiafoe 12 looks at second serves, where he took eight key points. Despite being broken once in the set, the young American would bounce back to break Bedene twice as he eased through the set 6-3. That drew the match even at one set each.

With everything on the line in the final set, second serves became huge. Both Bedene and Tiafoe landed under 50 percent of their first serves. That forced the fourth seeded Brit to put 25 second serves into play, where he would win 13 points. The American also put 25 second serves in play for the set, but won just ten points. In a final set, where it would be decided in a tiebreak, every point counted. Bedene would ultimately squeak through 7-4 in the breaker to wrap up a semifinal spot. It is his 8th straght win in Irving.

In a match of two young up and comers, 19-year-old Jared Donaldson defeated Russian Andrey Rublev 6-4, 6-1 to book his spot in the semifinals. The American won 85 percent of his first serve points and faced no break points on his way to victory in one hour and 17 minutes. It was a clinical performance for the world number 158, who controlled every part of the match. Both players held at the beginning of the first set, but Donaldson was putting pressure on the Russian's from the start. The American’s win rate on first and second serve points were both extremely solid, as he won 83 percent of the total service points in the set.

His domination on serve gave him the ability to break as he drew first blood to go up 5-4. He converted on one of five break opportunities in the first set. Donaldson had no trouble closing out the first set with a confident hold for 6-4. The American continued his momentum in the second set as he broke Rublev straight out of the gate for a 1-0 lead. Between change overs, a weather delay ensued in the Metroplex, causing play to be suspended. The delay might have given the Russian the time he needed to regroup, but Donaldson continued his run upon returning. He reeled off five of the last six games, with two more breaks for a clinical 6-1 second set finish.

Spaniard Marcel Granollers registered a big win over third seed Lukas Rosol 6-4, 6-2 in one hour and 42 minutes. Although it was a straight set win, the Spaniard had to work for it to get in winning position. The key for Granollers was saving four of the five break points he faced during the match. He did not get ahead of himself and his experience really showed as he fought for every point. As the match got out to a start, Rosol really put the pressure on his opponent early. The Czech started with a hold of serve and right away broke for a 2-0 lead. His big hitting led to a dominant 3-0 lead, but it was short lived as Granollers fought his way back in the set.

He faced no break points, as he raced out to a 4-1 lead. A dejected Rosol was unable to recover from his first set disappointment. Granollers never looked back, as he booked his way to the semifinals with a 6-2 second set finish.

The last match of the night saw doubles Grand Slam champion Ivan Dodig prevail over Diego Schwartzman 7-6 (2), 7-5. It was a returner’s day, as both players combined for 11 breaks of serve in a match that lasted one hour and 52 minutes. In the first set, both players struggled to get a rhythm on their service games. Both players broke three times off of three opportunities each. The back and forth set ultimately went to a tiebreaker. It was Dodig who came up big, as he ran away with the tiebreaker 7-2 to take the first set.

Schwartzman started out the second set with determination as he broke to take a 2-1 lead. Dodig stayed focused as he then broke twice after that to take the set and the match. Dodig has been one of many players and fans to praise the level of play at the ITC. Following his win, Dodig said,  "I think it's amazing, this tournament. It could be the level of an ATP tournament, how many good players are playing here."

The Croatian continued, saying that the ITC is a beneficial stop in between Indian Wells and Miami, "It's, I think, one of the best Challengers in the world, concerning the quality of players, and it's great for us players as we all use this time between the tournaments, if we don't do well in Indian Wells, to come here to prepare for Miami. I think it's a great tournament and it's very high quality matches here, very good players."

In the sole doubles semifinal of the day, top seeds Nicolas Monroe and Aisam-Ul-Haq Qureshi narrowly beat third seed, Colin Fleming and Neal Skupski 3-6, 7-5, 10-8. The first set saw the Brits come up big when it mattered the most. The pair broke twice off of four break opportunities and saved both break point chances faced in the first set.

The second set saw the top seeds broken again to give the Brits a big lead. It was not the end of the script though, as Monroe-Qureshi made an incredible come back to break and eventually get the set to 5-5. They would break again to edge out the second set, 7-5. In the tiebreaker, the Brits came out firing to take a 6-3 lead. Another great comeback was in order though, as the top seeds rallied to reel off seven of the last nine points in the tiebreaker for an incredible win. Qureshi took to twitter to express his feelings on reaching the final. 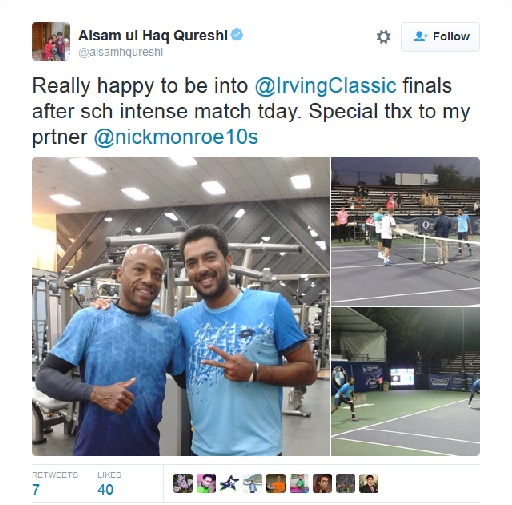 Monroe-Qureshi will play in the doubles final opposite of the winner between second seeds Chris Guccione and Andre Sa and fourth seeds Leander Paes and Lukas Rosol.