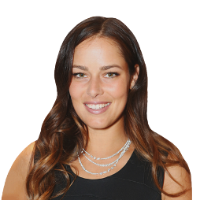 2008 French Open champion and 14th seed Ana Ivanovic fought past talented French wildcard Oceane Dodin 6-0, 5-7, 6-2 to reach the second round. In a rollercoaster match, the Serb struggled at times but eventually her class shown through to send the 19-year-old packing.

Ivanovic began the match with a comfortable hold of serve. In Dodin's first service game of the match, the 14th seed came out firing, breaking her French opponent immediately for a 2-0 lead. The Serb consolidated her break with an easy hold to love courtesy of a Dodin backhand error.

With the 19-year-old struggling on serve, the 2008 French Open champion kept up her aggressive returning to break again courtesy of a trademark Ivanovic forehand winner. The Serb then held again with Dodin struggling to contain her errors. With the Frenchwomen serving to stay in the set, Ivanovic put the pressure on her, breaking at love with an easy forehand return winner to take the set 6-0 and cap off the bagel in only 17 minutes.

In the most competitive game of the match so far, Dodin was finally able to showcase her big groundstrokes, but to no avail as Ivanovic eventually held in deuce game. The French wildcard then finally put herself on the board, holding fairly routinely to level the set at 1-1. The 14th seed responded beautifully, holding to love for 2-1. The 19-year-old then held again with a huge backhand winner and a big "Allez," much to the delight of the French crowd.

With Dodin finally getting momentum and bringing the Court Suzanne Lenglen crowd to her side, the wildcard played a terrific return game to break Ivanovic for the first time and go up 3-2 to send the home crowd into raptures. After seeming to have all the momentum from a dominant first set, the 2008 champion let her focus shift for a few games and Dodin was able to seize the momentum, but the Serb played a great return game to break back for 3-3.

The world number 16 then held easily for 4-3, before Dodin held with a big backhand winner. With the set level at 4-4, last year's semifinalist held comfortably for 5-4, putting the pressure on her younger opponent to serve to stay in the match. With her back against the wall, the French wildcard playing only her second ever match at Roland Garros pulled off a beautiful reflex volley to eke out a service hold to level the set at 5-5.

In a crazy, lengthy deuce game, the Serb struggled on serve, giving a window to Dodin, with the 19-year-old French wildcard breaking again for a 6-5 lead. With Dodin serving for the set, the world number 148 struggled with nerves, double faulting on her first set point before saving a break point with a fearless backhand winner. Dodin then blasted an ace down the middle, to bring up another set point, once again saved by her more experienced opponent. The fearless young Frenchwomen cracked another ace, this time taking her third set point with another huge ace to force a final set.

Ivanovic responds and closes out match

After suffering a major let down in the second, Ivanovic gained a crucial hold to steady her nerves and start off the set well with a 1-0 lead. The Serb then put herself in the ascendency, breaking for 2-0 off of a backhand error from Dodin. The Frenchwomen then played a beautiful return game to break back and get the match back on serve at 2-1. Last year's semifinalist then broke back again for 3-1, building more confidence with some sweet hitting as Dodin struggled with nerves.

Ivanovic then consolidated the break for 4-1, putting herself in good stead to move into the second round. In a long deuce game with Dodin fighting for survival, the wildcard squeaked out a crucial hold of serve to keep herself in the match at 4-2. The former champion then held for 5-2 to put the pressure on her less experienced opponent to serve to stay in the set. Ivanovic closed the match out on her first chance with a forehand swing volley to move into the second round 6-0, 5-7, 6-2.