Wimbledon is finally here after a three-week grass-court preparation for the players. As the third major is soon to be underway, we take a closer look at the men’s singles draw which is without Rafael Nadal. The lead up to the prestigious, eloquent Grand Slam saw success from young talent and grass-court specialists, but the main event will host all the top players, who usually limit themselves to minimum warm-up tournaments and exhibitions as they prepare to transition from the European red clay to the slick, green grass of Wimbledon.

Last year’s champion, Novak Djokovic, of course, leads the field at the top of the draw. Joining the Serb amongst the favorites is Andy Murray, who lifted his hope Grand Slam trophy three years ago. Roger Federer and Stan Wawrinka are the favorites to get through their quarter of the draw, but with dense talent spread throughout the 128-man draw, anything can happen considering players are most prone to be upset on grass. We now take a deeper look into the gentlemen’s singles draw of the 2016 Wimbledon tournament.

Novak Djokovic will open up his quest for his third consecutive silver gilt cup against the British wildcard James Ward. The Serb’s route to the fourth round should be fairly routine, but he could possibly face a tricky challenge in the third round against Lukas Rosol. However, that intriguing matchup will not happen unless the Czech can get past Sam Querrey in the opening round.

The world number one could potentially face David Ferrer in the round of 16, but Ferrer’s section boasts two always-dangerous players on the grass. The Spaniard should not have a problem defeating Dudi Sela in the first round, but the task gets tougher in his possible second round encounter against Nicolas Mahut, who took home the Ricoh Open title three weeks ago. Whoever advances through to the third round out of the Ferrer-Mahut battle will most likely run into Philipp Kohlschreiber for a spot in the second week of Wimbledon.

The second half of Djokovic’s quarter includes David Goffin and Kevin Anderson as the two favorites to make way into the third round. Goffin will go head-to-head with the world number 244 in his opener before playing either Edouard Roger-Vasselin or Teymuraz Gabashvili in the second round. On the other hand, Anderson is faced with two veterans back-to-back as Denis Istomin and Nicolas Almagro stand in his path. If both of the seeds get through their first two matches as expected, Goffin will be the overwhelming favorite against Anderson, despite grass being the Belgian’s worst surface.

Milos Raonic is the second highest seed in Djokovic’s quarter. The Canadian will start his Wimbledon run against Pablo Carreno Busta before either taking on Andreas Seppi or another Spaniard in Guillermo Garcia-Lopez. Raonic’s possible round of 32 opponent is Jack Sock who should have no problem getting past Ernests Gulbis and Robin Haase. The probable third round encounter between the Canadian and American will be a battle of serve with a single break practically deciding an entire set.

The top quarter consists of four Brits with three of them being wildcards. James Ward will most likely be unable to back up his third round run 12 months ago as he takes on the top seed in his opener. On the other hand, Kyle Edmund searches for his first main draw match win at his home major, but Adrian Mannarino stands in Edmund’s way. Alexander Ward will play David Goffin while his fellow British wildcard Brydan Klein will play Nicolas Mahut.

Roger Federer has had a fairly unusual grass-court season considering his two three-set losses in Stuttgart and Halle. The 17-time Grand Slam champion opens up his 18th straight Wimbledon against a clay-courter in Guido Pella. Federer would then face either Ricardas Berankis or Marcus Willis for a spot in the third round. The third seed’s potential third round opponent will be decided between Jan-Lennard Struff and Alexander Dolgopolov who both do not pose a threat to Federer on grass.

Gael Monfils and Giles Simon are Federer’s potential fourth round opponents, but Simon’s section of the draw includes an abundance of talent as Jeremy Chardy, Steve Johnson, Grigor Dimitrov, and Janko Tipsarevic are all threats to making a run to the second week. The recent form of Johnson with having just won the Aegon Open in Nottingham puts him as the player to beat in that strong mini-section. If the Americans serve stays in-form then he will be well on his way to the second week of a grand slam for the first time.

Two Croatians hold the two seeded positions in the next mini-section of Federer’s quarter. Marin Cilic and Ivo Karlovic should set up an all-Croat third round matchup, but before they have a few dangerous floaters in their draw. Cilic opens up his tournament against Brian Baker and will potentially go head-to-head with a grass-courter in Sergiy Stakhovsky in the second round. On the other hand, Karlovic will play against countryman Borna Coric who possesses a plethora of talent. If and should the big-serving 23rd seed pass the next generation star, he will face either Paolo Lorenzi or Lukas Lacko.

Kei Nishikori leads the bottom pack of Federer’s quarter along with Pablo Cuevas and Gilles Muller. Nishikori shows off against Sam Groth on Monday as he will quickly be faced with a player who holds an effective game style on the grass. The fifth seed should go on to match up with a comfortable second round. The task only gets tougher for Nishikori as the grass-court specialist Muller is his probable third-round opponent, but that is if the Luxembourger can upset Cuevas in the second round

Great Britain is not as highly represented in Federer’s quarter as they were in Djokovic’s quarter. Marcus Willis and Daniel Evans will look for their first career wins in the main draw at Wimbledon and they both have winnable first round matches. Willis qualified for the main draw despite being ranked outside of the world’s top-750. The qualifier will make his Grand Slam main draw debut in front of his home crowd against Berankis, but for Evans, he has recently peaked into the top-100 and after three previous failed attempts, he will fight for his first main draw win at his home major.

Stan Wawrinka is the fourth seed at Wimbledon this year. However, he has the toughest draw put of the top seeds. The Swiss number two will take on Taylor Fritz in his opener and if he is to get through, Juan Martin del Potro will await in the second round. The Argentine has high expectations for his time at the All England Club considering he missed Roland Garros to prepare for the year’s third major. Whoever escapes the Wawrinka-del Potro battle would go on to play Lucas Pouille for a spot in the second week.

Roberto Bautista Agut and Bernard Tomic are Wawrinka’s possible round of 16 opponents, but one non-seeded player stands as a threat to come through their mini-section. Fernando Verdasco has had some high-quality wins at grand slams this year, including a win over Nadal in Australia. The Spaniard also made the final eight at Wimbledon in 2013 and not to mention, he was two sets to love up on the eventual champion. Despite a recent loss to Tomic, Verdasco has the ability to push through his opener against the Aussie and possibly knock out Bautista Agut in the third round.

Tomas Berdych has recently slipped back to ninth in the world and will be the tenth seed at Wimbledon. The Czech has a fairly routine route to the third round until Berdych will battle it out with Alexander Zverev for a place in the fourth round. Each player should have no problem getting through their first two matches. Berdych opens up against Ivan Dodig before meeting Benjamin Becker or Facundo Bagnis in the second round. Zverev holds strong form after his performance in Halle and should advance past Paul-Henri Mathieu and Mikhail Youzhny.

Dominic Thiem and Joao Sousa headline the final section in Wawrinka’s quarter. Thiem has had a season to remember thus far with already having tallied 47 wins in six months. But this year’s Gerry Weber Open champion, Florian Mayer, will be the Austrian’s first round opponent. If Thiem can overcome the German, then he will take on Jiri Vesley who has a win over the world number one this year. On the bright side, if the eight seed can get past his difficult opening matches, he will have a straightforward route to the fourth round as he would not have a problem beating Sousa.

Wawrinka’s quarter lacks a single Brit, but the British crowd has a lot to look forward to with a total of nine home hopes amongst the gentlemen’s singles draw. 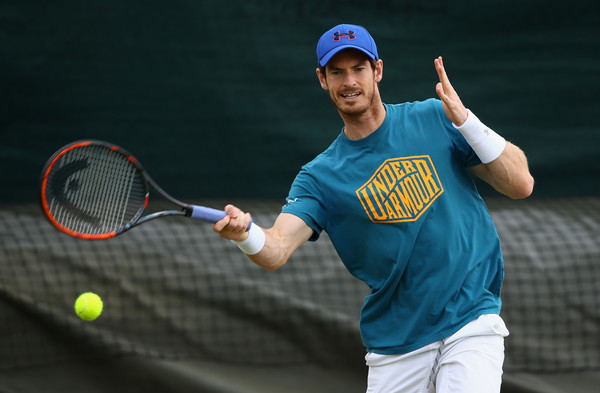 Andy Murray sits at the bottom of the draw and will kick off his title campaign against a compatriot in Liam Broady. The 2013 Wimbledon champion should then meet Yen-Hsun Lu in the second round and will await yet another opponent who should not pose a threat to the world number two. Benoit Paire is Murray’s potential third round opponent. The Frenchman has his work cut out for him in his first two rounds against the Croatian qualifier Franko Skugor and the Australian John Millman.

Nick Kyrgios and Feliciano Lopez lead the mini-section that holds Murray’s potential fourth round opponent. But the section possesses a wide variety of talent with Radek Stepanek, Dustin Brown, Fabio Fognini, and Rajeev Ram floating as dangerous unseeded players. Stepanek has the game to be successful at Wimbledon like he has done in the past, and yours truly predicts that the Czech veteran will send Kyrgios on his way an opening round upset. But Brown should get through to the third round if he can pass Dusan Lajovic and possibly Stepanek. Fognini will play Federico Delbonis in his opener before potentially facing Lopez for a third round birth.

John Isner and Jo-Wilfried Tsonga are the favorites to carve their way to the round of 32 with very few unseeded threats in their mini-section. Isner will begin his tournament against Marcos Baghdatis and consider the American leads the Cypriot 6-0 in their head-to-head match series, the big-serving 18th will not have much to worry about. Isner would then go on to play in a routine second round against Albano Olivetti or Matthew Barton. Tsonga looks well on his way to the round of 32 with two clay-court specialists, Inigo Cervantes and Juan Monaco, in his path, but that is if Monaco can overcome the talented Japanese Taro Daniel in his opener.

Last but certainly not least, Richard Gasquet will need a solid run to back up his semifinal appearance 12 months ago. He will have to get through Aljaz Bedene and Marcel Granollers in the early stages of his draw. Viktor Troicki also appears in Gasquet’s mini-section as the 25th seed. The Serb will take on the French qualifier Tristan Lamasine before possibly matching up with Vasek Pospisil. However, the Canadian’s year has not been successful thus far with his record currently at four wins and 15 losses. So Troicki may instead see Albert Ramos-Vinolas in his second match.

The Brits are well represented in Murray’s quarter, and not to mention that one of them will be guaranteed a stay until Thursday considering the Murray-Broady matchup. As mentioned before, Bedene has his hands full in his first round encounter with the seventh-seeded Gasquet.