It’s hard not to know who Maria Sharapova is right now, not only she has become one of the most popular sportspeople in tennis, she is also a five-time Grand Slam champion. But back in 2004, Sharapova was a promising unknown player who was about to stun the world in that year’s Wimbledon.

A lot can be said about Maria Sharapova these days, but no one could ever erase what the Russian did on July 3 in 2004 when she scored what has been qualified as “the most stunning upset in memory.” With just seventeen years old, Maria Sharapova defeated the defending champion, Serena Williams in straight sets to claim her first Grand Slam title in Wimbledon, this being just the second time the Russian has made it to the main draw. 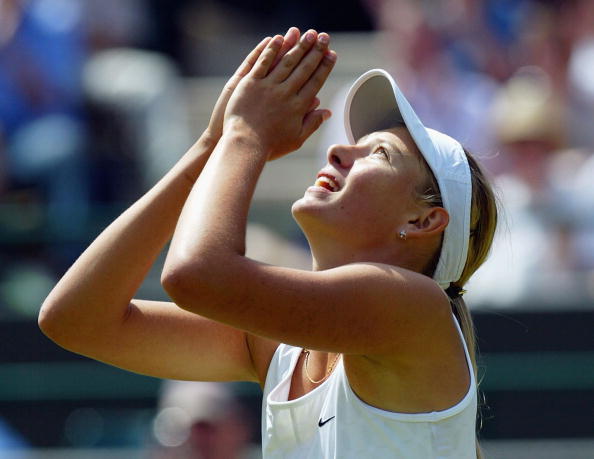 In 2003, a young Russian tennis player had made her debut at the Australian Open and French Open, losing in the first round of both tournaments. For the most prestigious tournament in tennis, she was granted a wildcard. It was at the All-England Club where she won her first Grand Slam match after defeating Ashley Harkleroad 6-2, 6-1. In the second round, Sharapova met her first seed, Elena Bovina but the also Russian was not a problem for the sixteen-year-old, Sharapova who also won in straight sets. In the third round, she surprised everyone when she beat the eleventh seed and former Wimbledon semifinalist, Jelena Dokic in straight sets. Unfortunately, her run at Wimbledon was ended when she faced another Russian, Svetlana Kuznetsova. Sharapova managed to win a set but Kuznetsova prevailed, 6-1, 2-6, 7-5.

This fourth round result at Wimbledon would be her best in a Grand Slam that year. However, Sharapova was giving small hints of what the world would witness the following year.

One year later, the world was ready to see the best of Maria Sharapova. She had made it to the third round of the Australian Open and as the 18th seed, she reached her first quarterfinals at the French Open. Sharapova came back to Wimbledon, where she had won her first Grand Slam match as the 13th seed. The young Russian began her campaign against a qualifier, Yuliya Beygelzimer but Sharapova overcame her in straight sets. In the second round, she found a difficult opponent since she would have to play against the crowd too as she faced Anne Keothavong. Facing a home crowd favorite didn’t seem to affect her as she defeated her 6-4, 6-0. 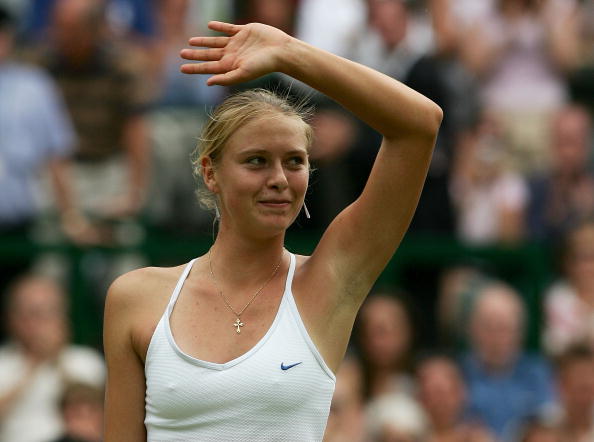 In the third round, she would have to play against former Wimbledon quarterfinalist, Daniela Hantuchova. Again, the Russian won in straight sets and booked a spot in the fourth round, where she had lost the year before. There she met, Amy Frazier who was fifteen years older than Sharapova. The American did a better effort than the opponents Sharapova had in the past, still the Russian won 6-4, 7-5 to reach her second quarterfinal of the year and in her career at a Grand Slam. During her first four matches, Sharapova hadn’t dropped a set. In the quarterfinals, she met a higher seed, Ai Sugiyama. The Japanese won the first 7-5, but Sharapova then came back to win the next too and reach her first Grand Slam semifinal.

At this point, Sharapova had become the surprise of the tournament but she had yet to face her biggest task. Former Wimbledon champion, Lindsay Davenport would be her opponent in the semifinal. After they played two points, the match was suspended because of the rain. Being at this stage of the tournament was new for the seventeen-year-old, who showed her nerves in the first set. After the rain delay, Sharapova lost her serve and Davenport got an early lead. The Russian eventually began to find her pace, but the American took the first set 6-2. Things were not looking good for Sharapova who lost her serve at the start of the second set. Once again, the match had to be suspended when Davenport was 2-1 and a set up.

“I think she was leading by a set and a break when the rain came,” said Sharapova. “I was down and out. But I was a happy girl. I was in the semi-finals for the first time. A few weeks ago I’d been a quarter-finalist at Roland Garros, and I was happy to be booking a flight home late in the second week of Wimbledon. Then the rain stopped and I remember just before I went on court my dad looked me in the eyes and said, ‘You’re going to win this match.’ And I gave him a ‘Yeah, right’ kind of look. It was tough to face him afterwards because you never want to admit when your father’s right.” 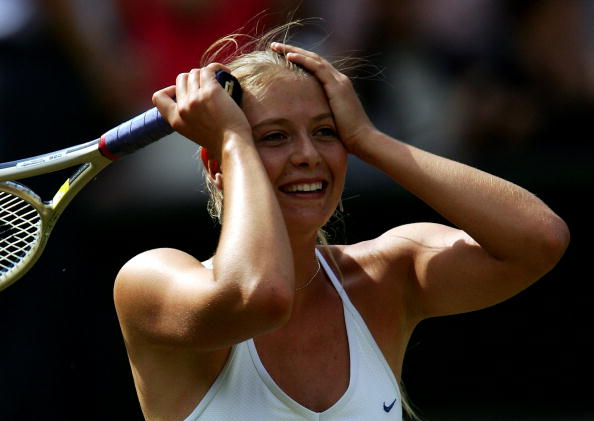 The delay didn’t last more than an hour and soon the players were back on the court. Davenport held her serve to be up 3-1. However, the Russian was playing a more aggressive tennis and that helped as Sharapova soon recovered the break to even things up. The second set ended in a tiebreak where the Russian would need three set points to force to a decider when she hit a backhand winner. In the final set, Sharapova was in full control as the American only held her serve once, giving the Russian her pass into her first Grand Slam final.

"This is unbelievable," said an emotional Sharapova after her win. "I don't know how I am in the final. It is crazy. This is my favorite Grand Slam, but I never expected to do so well so early. I am so amazed.”

The most stunning upset in memory

After defeating fourth seed, Amelie Mauresmo in the semifinal, Serena Williams made it to her third straight Wimbledon final and was looking to also make a hat-trick in Centre Court. Being the first seed, Williams was confident and had a lot more experience at this stage of a Grand Slam than her opponent.

Many would have thought the seventeen-year-old would have been nervous to be in her first Grand Slam final. Why wouldn’t she? Not only she was playing the world number one who had won this title twice, she was also playing her first major final, she was the underdog, and came from a tough semifinal where the nerves affected her during the start of that match. However, just like in that match against Davenport, Sharapova proved the world wrong. 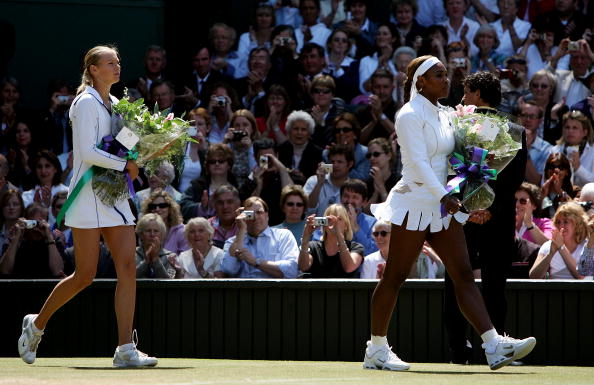 In fact, it was Williams, the six-time Grand Slam winner, who was struggling to find her rhythm and the top seed fired a long backhand to give the Russian an early 3-1 lead. It quickly became 5-1 when Sharapova whipped a backhand winner cross-court to break for the second time. Serving out the set did not prove so easy, but after seeing three set points go by, the Russian took control of the final after just 30 minutes winning the first set with an outstanding 6-1.

In the second set, Williams was a break up but just like in her semifinal match Sharapova fought back. The teenager broke straight back and began playing amazing tennis, so good that even had her opponent applauding her shots. This level of tennis inspired Sharapova who had the whole crowd on Centre Court impressed. The ninth game of the set proved to be a crucial one as Williams was seen running all over the court to avoid the break, however, after four opportunities Sharapova got a huge break after the American sent a ball wide. 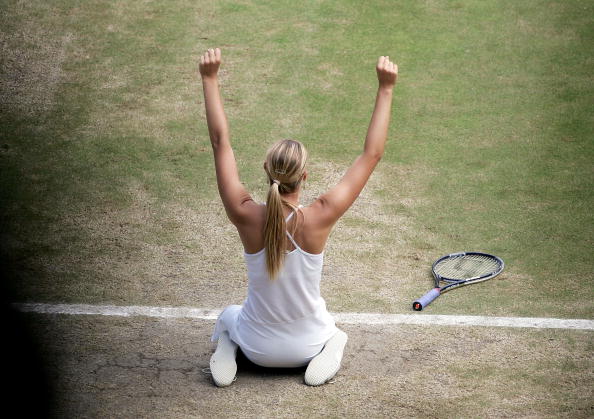 Now it was up to the teenager to serve for the championship. This would be her hardest task as she had played an amazing match, but the spectators in Centre Court wondered if the young Russian had the nerve to close the match. The Russian opened the game with an unforced forehand error but later recovered from that mistake with an ace and the with a great serve who made Williams leave the ball in the net. Another unforced error by the American gave Sharapova two championship points, but the Russian wasted one sending a wide ball. It was a forehand into the net by Williams that made it official, Maria Sharapova was the Wimbledon champion.

The teenager dropped to her knees and buried her face in her hands while her father, Yuri Sharapov celebrated the triumph of his daughter. A Sharapova in disbelief shook hands with Williams who hugged the recent champion before shouting a huge 'come one' and threw a ball to the crowd. The most emotional moment of the match was when Sharapova ran up to meet her father who hugged her tightly. It was a great win for the father and daughter who had moved from Russia to Florida in search of an opportunity for Maria.

“It’s unreal,” she told BBC Sport after collecting the trophy. “My father and I have been through this together and it’s just amazing.” 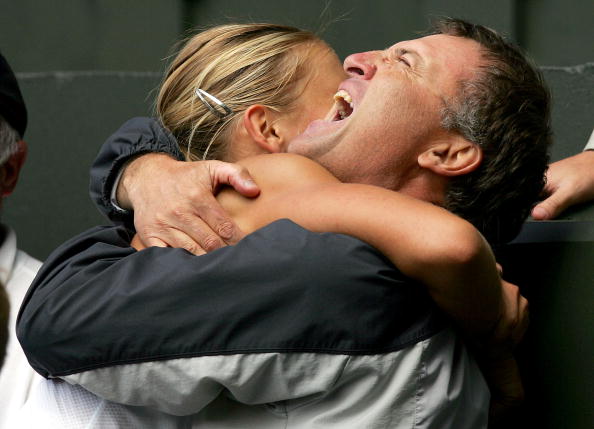 Maria Sharapova did not become a one hit wonder. Sharapova would win the US Open in 2006 against Justine Henin and the Australian Open in 2008 defeating Ana Ivanovic. The Russian completed her Career Grand Slam in 2012 after her victory in what many thought would be the tournament she would never win, the French Open. And in 2014, she won the French Open again beating Simona Halep.

As for her best result in Wimbledon since that amazing win happened in 2011 when she reached her second final at the All-England Club but lost to Petra Kvitova. Nevertheless, a star was born after that match in Wimbledon. 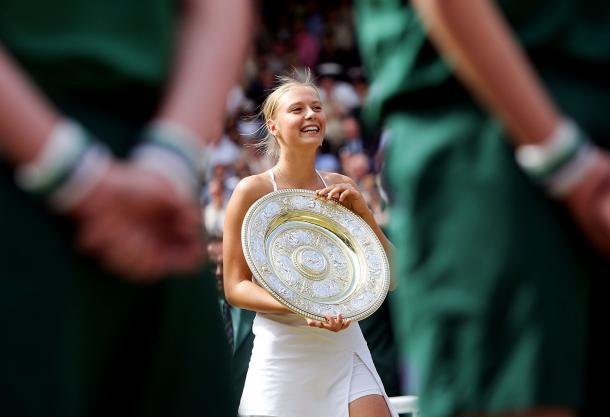 Maria Sharapova remembers that victory as the start of her career, where everything began. "To think back that I was holding that trophy as a 17-year-old girl is really special. It really makes me feel really happy inside when I look back on those years," Sharapova told CNN's Open Court in 2014.