After Karolina Pliskova's surprise loss yesterday, Caroline Wozniacki went into her first round match as the highest seed remaining at the J&T Banka Prague Open. However, this seemed to not have any effect on her at all, as she swept past Misaki Doi with the loss of just five games.

Clay has never been Wozniacki's favorite surface but she looked extremely comfortable today, against Misaki Doi who has struggled for match wins so far this season. In what was a first meeting between the two players, the Dane looked relatively comfortable throughout the match as she adjusted to the new surface, taking the match in 1 hour 29 minutes.

Wozniacki blitzes through the first set

In what was the first match of the day in Prague, Wozniacki came out of the blocks fast. She barely struggled on serve; her first serve percentage in the set was 86% and she held serve to love in two out of her three service games. The Dane's first break came in Doi's opening service game, where she played some excellent groundstrokes to set up the break points, which she took on the second attempt. She then broke again in the fourth game thanks to an unforced error from the Japanese player, to stretch her lead to 4-0.

Another easy service game followed, where Wozniacki was dominant in her groundstrokes as she forced Doi to chase down balls all over the court. After 22 minutes the set was over as the Dane took her first set point opportunity on a Doi backhand which sailed long. 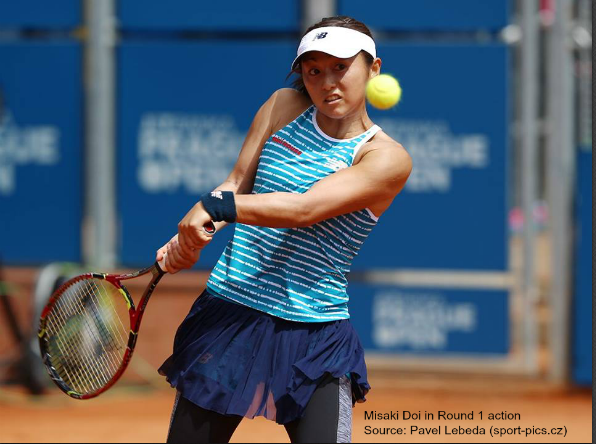 Doi mounts a comeback, but Wozniacki hangs on

The second set started much the same as the first for the former world number one, as she grabbed the early break in Doi's first service game of the set. She then went on to take a 3-0, using a combination of good net play and strong groundstrokes; a perfect forehand down the line in the third game being a good example.

It took Doi until the tenth game before she finally held serve after the Dane started making a few more unforced errors. The Japanese player then used this momentum to challenge Wozniacki's serve for the first time in the match. Wozniacki struggled a lot more with her serve in the second set as her first serve percentage dropped to just 59%, and she served four double faults.

The momentum continued to grow for Doi and she finally got the break she deserved in the seventh game of the set, which she set up with a strong forehand down the line. She did manage to consolidate the break but not before saving a break point from Wozniacki as the Dane tried to regain her advantage straightaway. It looked like the set was going to be decided by a tiebreak until Doi had to serve to stay in the match. Wozniacki only needed one set point which she took on another forehand winner down the line, to take the match 6-0 7-5.

Caroline Wozniacki will now face Jelena Ostapenko in Round 2 of the J&T Banka Prague Open. The Dane has never beaten Ostapenko in two attempts and will be looking for revenge, especially as their last meeting was only a few weeks ago on the green clay at Charleston.