Pablo Carreno Busta notched the biggest victory over his career with a 7-5, 6-3, 6-4 triumph over world number 13 Grigor Dimitrov in the third round at the French Open.

The Spaniard sealed his place in a career-first fourth round at a major event, recovering from a remarkable 4-0 deficit in the opening set to oust the Bulgarian.

His backhand proved too erratic to sustain consistent pressure on the 23-year-old, who extended his excellent run on clay and will face the world number six Milos Raonic in the last 16.

Dimitrov arrived in this Court 1 encounter having scored his only two victories at Roland Garros to date, defeating Stephane Robert and Tommy Robredo in straight sets without breaking a sweat.

Carreno Busta, in the meantime, had saw off the dangerous Taro Daniel in the previous round and could boast an ATP 250 title on the dirt in Estoril this spring.

And yet their respective track-record on the surface was shelved during the opening set as Dimitrov raced out into a 4-0 lead.

He outlasted the Spaniard in a 22-stroke rally to grab the first before, having fashioned a total of five break points through barely 20 minutes of tennis, wrong-footed his opponent and whipped a forehand winner to confirm the double break.

Few would have begrudged Carreno Busta for conceding the opening set but in typical Spanish fashion he carved out an opening under a steadfast refusal to allow Dimitrov to dictate the rallies.

He constructed three break opportunities at 1-4 before Dimitrov threw in one of several double-faults to afford the Spaniard a glimmer of hope.

He then benefitted from a fortunate net chord to level the set before the pair exchanged love holds.

A pair of set points arrived in the twelfth game and a wild backhand down the line from Dimitrov ensured the seven out of the last eight games went the way of the Spaniard. 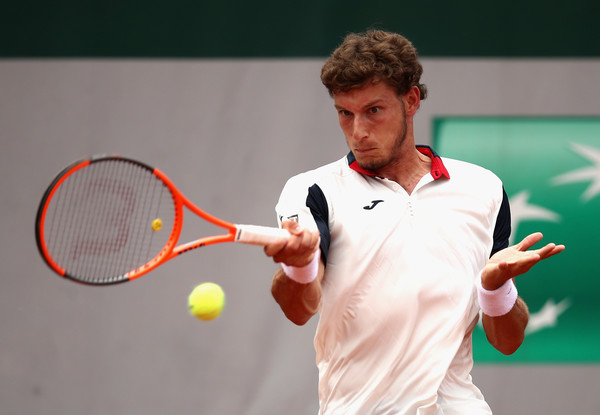 Writing on the wall

Just over an hour had elapsed when set two got underway and almost instantly Carreno Busta was pressuring the Bulgarian’s serve.

He was forced to stave off three break points in the fourth game as the errors began to fly off of his backhand wing.

And at 4-3 the Spaniard struck, coaxing a forehand error from Dimitrov as he closed in on the second set.

He would not disappoint, claiming the second set in 43 minutes and for Dimitrov to score a memorable comeback from two sets down he would have to produce a feat he had never once achieved in his career.

But when the Spaniard produced a supreme passing shot down the line from outside of the tram lines on break point in the third game of the next set the wheels were set in motion.

Carreno Busta never looked back, maintaining his strong first serve percentage and carving out two match points, and a Dimitrov error, as the clock ticked towards two hours and 20 minutes.