Seventh seed and 2018 French Open runner-up Sloane Stephens continued her quest to go one better than last year with a fine win on Sunday evening, with the American overcoming two-time Grand Slam winner Garbine Muguruza to reach the quarterfinals.

Muguruza, the 19th seed, has been out of form in the past year or so, though always plays well at Roland Garros, having won the title in 2016 and reaching the last four year, and had impressed in a third round win over Elina Svitolina, though could not take advantage of her fast start today. 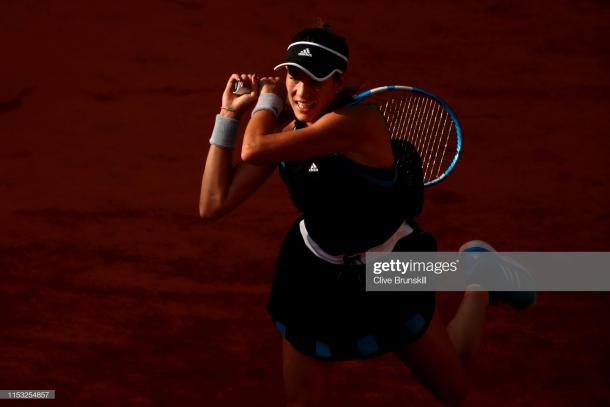 Stephens has not been at her best in large parts of the season so far, though perhaps put in one of her best performances of the season today to reach the last eight, winning 6-4, 6-3 in an hour and 40 minutes.

Stephens toughs out Muguruza to win in straight sets

It was by no means an easy contest, with Muguruza playing well at times, but Stephens ultimately proved too solid as she won the third meeting between the two.

It was Muguruza who started sharply, breaking in the opening game, and it looked as if the Spaniard would dominate as she held five more break points on Stephens next service game. However, the American was able to hold, and later broke back for 3-3. Her fightback seemed to fuel her, and she broke Muguruza again for a 5-3 lead. She failed to serve out the set, though responded quickly in breaking for a third time to take the set in just under an hour.

The second set was also tight, with Muguruza forced to save break points early on when down 1-2, though there were not any real chances after that, with both able to apply some pressure when receiving, though not enough to force any break point chances. However, Stephens managed to raise her level up 4-3, breaking to lead 5-3. The American missed four match points, and then faced a break point, though saved it and then converted a fifth match point to reach the last eight for the second consecutive year.

After a tricky third round match that went to three sets, Stephens will undoubtedly be thrilled with a solid straight sets victory, particularly against an opponent who plays so well at this tournament. It will, however, likely be another tricky match next for the seventh seed against 26th seed Johanna Konta. The Brit prevailed in three sets when the two met in Rome just a few weeks back, and this could prove to be another close contest.