Rafael Nadal has won the US Open for a fourth time after a thrilling 7-5, 6-3, 5-7, 4-6, 6-4 victory over Daniil Medvedev in four hours, 51 minutes. The Spaniard claims his 19th career major championship, putting him one behind Roger Federer for most all-time.

In a surprise, it was Medvedev who came out the more confident of the two, earning break point chances in each of Nadal's first two service games. He failed to capitalize on the first, but took the second when the Spaniard misfired for a 2-1 lead.

Undeterred, Nadal broke back and in the eighth game, built a 15-40 lead on Medvedev's serve, but the Rissian showed off his skills at net, a forehand volley winner and serve-and-volley point wiping away the two chances to level the set at 4-4.

The fifth seed was made to work for his next hold, enduring an eight minute, 14 point game that saw him tie things up at 5-5. He fell behind again 15-40 after an 18-stroke rally, saved the first set point by winning a 19-shot rally, but was undone after getting a volley all wrong off of Nadal's lob attempt. 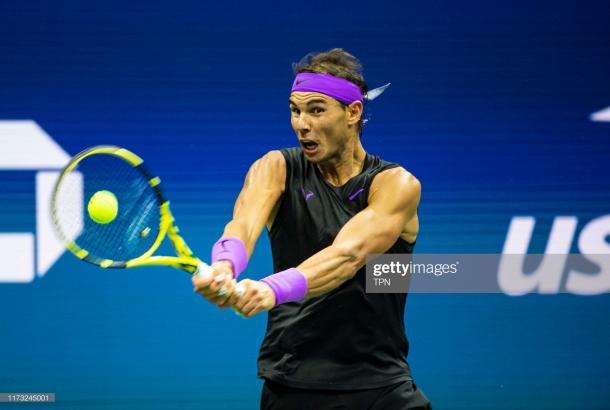 Medvedev gave himself a chance in the opening game of the second set as a searing forehand winner brought up break point, but a short backhand miss wiped away the opportunity. The Russian escaped four break points against him in the fourth game to keep pace at 2-2.

Two games later, Medvedev was in huge trouble after Nadal fired a backhand for which the Russian had no response for to bring up two break points, converting on the first after sizzling a forehand for a 4-2 lead. The break was consolidated with an easy hold from the Spaniard, putting him one game from the set.

Medvedev would hold to love and have a look at 15-30 on the Nadal serve as the second seed attempted to serve the set out, but he lost three straight points, the last on a sharply angled forehand that the fifth seed could do nothing with to give Nadal a two-set lead. 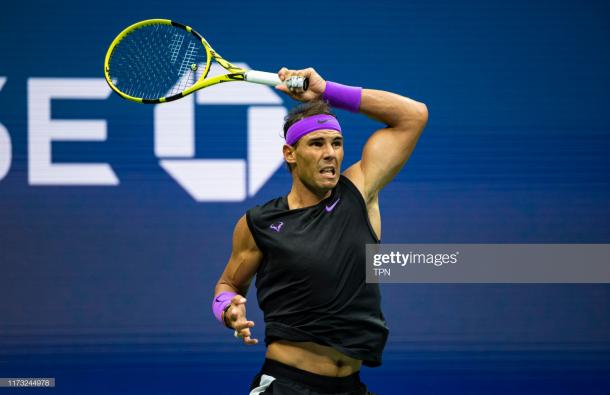 Medvedev guts out third set to trim deficit in half

There wasn't much going on for the returner in the opening games of the third set, the highlight being a punishing 23-shot rally won by Nadal with a forehand volley winner. He seemingly took command of the match after Medvedev floated a backhand long on break point for a 3-2 advantage.

To Medvedev's credit, he broke back straightaway, but moments later was facing a break point, which was seemingly a virtual match point in the ninth game, saved with an overhead off of the forehand side for a 5-4 advantage. He retained his lead after a much easier hold next time out.

Serving to stay in the set a second time, Nadal saw a Medvedev forehand fly past him to bring up triple set point for the Russian. The first was saved with a backhand volley, but the second was taken after the fifth seed blasted a backhand for a winner to cut the deficit to two sets to one. 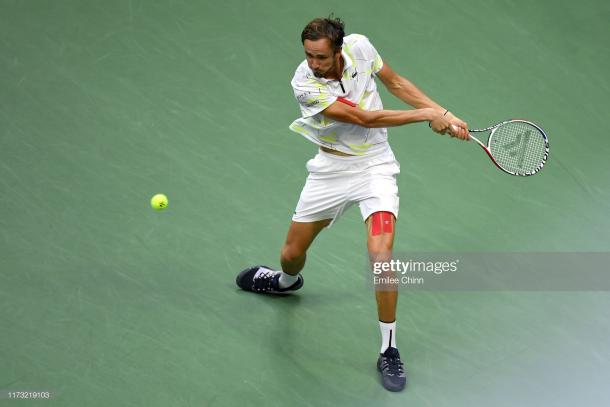 The fourth set began with Medvedev recording a nervy hold, having seen a 40-0 disappear to deuce before clocking consecutive backhand winners. He then had a look at a break point in Nadal's opening service game of the set, but an easy backhand miss helped the Spaniard to a hold.

Three sloppy errors turned 30-0 into 30-40, but Medvedev saves the break point on a serve-and-volley. Another break point, another saved and the Russian holds for a 3-2 lead. Both men were holding with relative ease with the Russian hanging on to a 5-4 edge.

The fifth seed went big and bold after trailing 40-15, pulverizing a forehand and clubbing a backhand on set point to break and improbably force a fifth and deciding set in this memorable championship match. 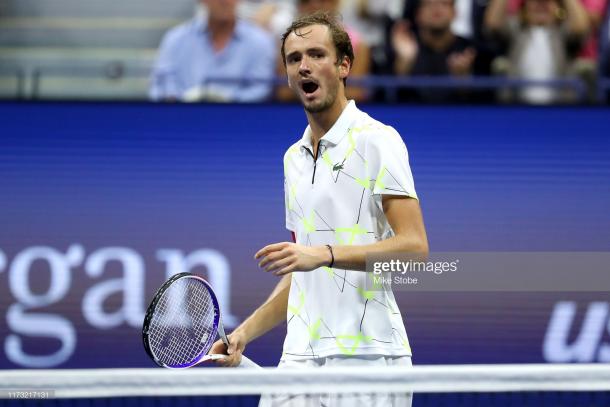 Nadal gets over the line to claim 19th major title

The Spaniard was on the run to start the fifth set, trailing 1-0 and facing three break points in his opening service game, but he saved all three with massive forehands to hold. The tipping point came in the fifth game after Medvedev held a 40-0 lead, culminating with a Nadal backhand winner off of a pulsating 28-shot rally.

A second break came again after Medvedev wasted a lead on his serve, this time from 30-0. A sublime drop shot brought up break point for Nadal and the Spaniard was 5-2 ahead when the Russian badly missed an overhead, Nadal now serving for the championship.

At 30-30, Nadal missed a backhand to bring up break point. A time violation for the second time in the match meant a loss of a first serve and the Spaniard promptly double-faulted to give one of the breaks back. Medvedev would gut out a hold, saving two championship points to cut the deficit to 5-4.

Serving for the title for a second time, the Spaniard struggled, framing a forehand to set up break point for Medvedev. A delightful drop shot two points later got Nadal to championship point and he converted after the fifth seed sent one final return long, ending one of the great major finals in recent history. 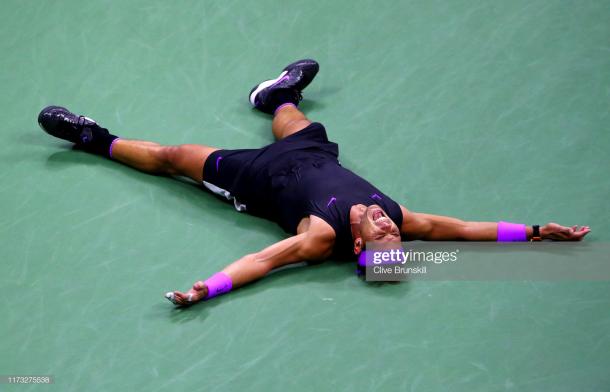