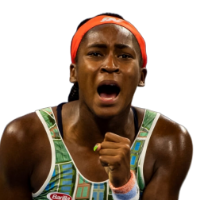 An under-par performance from world number three and defending champion Naomi Osaka saw her being stunned by the 15-year-old wonder Cori Gauff in the third round of their Australian Open clash. A solid performance from the American was enough to seal a commanding 6-3, 6-4 win over the two-time Major champion within just 67 minutes of play, booking her spot in the second week of a Grand Slam for the second time in her career.

It was their second consecutive meeting at a Grand Slam, having met in Flushing Meadows a couple of months ago. In that clash, Osaka strolled towards a 6-3, 6-0 win but Gauff completely turned the tables today as her serves were just too good for the former world number one. It was not the match of the best quality but this was a highly-anticipated clash between two of the most famous youngsters in the game right now.

The serve was definitely one of the main focus during the off-season for the American as Gauff was only broken once and won 76 per cent of her first serves while serving at 75 per cent. Although she hit only six winners to 17 unforced errors, Gauff’s stats were superior to 17 winners to 30 unforced errors for Osaka.

Osaka was nowhere near her usual standards in the match, missing the most routine groundstrokes and being unable to find her rhythm at the baseline. Failing to find a high percentage of returns into play, the Japanese gradually faded despite a bright start and will head back to the drawing board after the tournament.

Gauff opted to start the match serving but was taking some time adapting to the conditions as she had to survive a deuce game, serving a double-fault en route. The start of the match was just filled with routine service holds, with neither being able to dig for opportunities on the return.

The first real opportunity for a breakthrough came in the sixth game when Osaka conceded a 0-30 deficit, but served clinically to survive the huge scare and level the scoreboard. Gauff was booming with confidence and was gradually raising her level.

Three consecutive unforced errors from Osaka proved costly as she played a self-destructive service game, allowing Gauff to serve out the set to love without much hassle.

Having all the momentum with her, Gauff was simply rolling through the games although all she needed to do was to keep the ball in play. Osaka was conceding too many free points with a slew of errors, being broken in the opening game of the second set.

However, a marathon game saw Gauff feeling the occasion and losing her advantage immediately with some inspired play from Osaka. Her improved level only lasted for a couple of games as she completely lost the plot from 3-2 up.

Leaking errors from every part of the court, Osaka could barely find a good shot and grew increasingly frustrated with herself, though she did not throw her racquet this time in an attempt to control her emotions, unlike her previous matches. She failed to find the turning point, and Gauff pounced on her errors to seal the comfortable 6-3, 6-4 shocker in front of a packed Rod Laver Arena.