Liverpool secured their first home league victory under Jürgen Klopp, and their sixth win in seven games, as they beat Swansea City 1-0 on Sunday.

They were left frustrated after a first half in which they saw a lot of the ball but not much end product, and had to weather some Swansea pressure as the game went on.

However, James Milner's penalty a little past the hour mark sealed all three points, after a late onslaught from Gary Monk's men was held off, leaving Anfield relieved. Here's our player ratings from the game.

Simon Mignolet (6/10): Conceded an indirect free-kick on Thursday for holding the ball for too long, booked on Sunday for timewasting as the Reds ran the clock down. It's clear which act his manager will have preferred, as Mignolet made himself noticed on a day where he had little to do.

Nathaniel Clyne (7/10): Still riding the wave of not being Glen Johnson, Clyne's consistency was there to see again on Sunday, as he subdued first Andre Ayew and then Jefferson Montero down the left-wing. Better on the ball than in recent games too, the ever present right-back had another good game.

Martin Skrtel (6/10): Only awarded a lower score than Clyne because, similarly to Mignolet, he had little to do. Bar a booking, he was fine, and cleared the ball at the right times when taking the windy conditions into account.

Dejan Lovren (6/10): He's doing just fine at the moment. Brought in again for the injured Mamadou Sakho, Lovren was never going to match up to the Frenchman's performance levels, but had one of his best games in a Liverpool shirt. Assured in the tackle and confident on the ball, a clean sheet will do his confidence the world of good.

Alberto Moreno (6/10): Giving sixes is getting slightly tedious, but that was all Liverpool required to keep Swansea out. Moreno was good in defence, showing one example of his trademark ability to win the ball from behind a man, but will be lucky to get back on free-kick duty after he blazed a good chance over towards the end of the first 45. 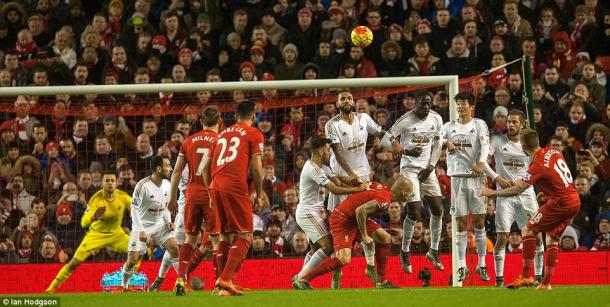 Emre Can (8/10): Liverpool's best player. Can started as the deepest of the midfielders in the absence of Lucas Leiva, and showed his defensive qualities by dominating the middle of the park. His attacking didn't go down the pan either, as he curled a stunning ball to Benteke early on, only for the Belgian's touch to let him down.

James Milner (6/10): Seems to have a real knack for getting booked with stupendously pointless challenges, in areas where the ball doesn't need to be won. Once he got that out of the way, Milner improved, worked efficiently in the midfield and tucked away his penalty well. Still, you do get the feeling that he'll be the fall guy when Henderson's available to start every week.

Jordon Ibe (7/10): Although he's not quite performing at the levels we know he can, Ibe has come on leaps and bounds since the appointment of Klopp. Could have done more early on when the ball was taken off his toes, and eventually hit the post, but his willingness to run at defenders helped him win the penalty.

Roberto Firmino (5/10): Giving him a mere five does seem harsh, as the Brazilian was by no means awful, just tired if anything. Having built up match-fitness under Klopp, the recent flood of games Firmino has played in seems to have taken its toll, and he struggled to make much of an impact. Could do with a rest against Southampton in midweek, so he's raring to go for Newcastle away next weekend.

Adam Lallana (6/10): Struggled against a deep, determined Swansea defence, but is releasing the ball much quicker these days and that helped his side put enough strain on Swansea to force an opening. Another that has played a lot of football recently, and could do with some midweek rest.

Christian Benteke (5/10): On the periphery for much of the game, Liverpool's big Belgian struggled to make an impact, and should have done better from the aforementioned Can pass. Did well to set Ibe up early on, but was dealt with comfortably before eventually being substituted. 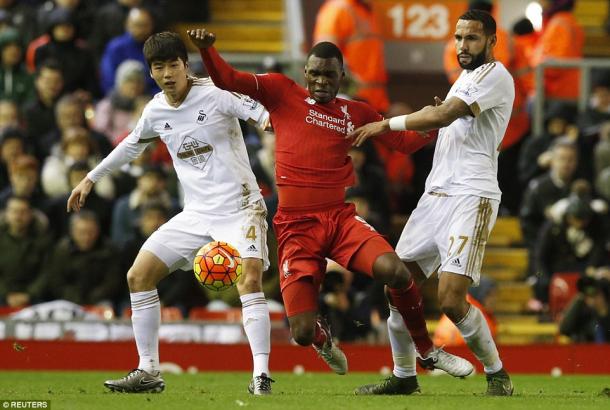 Jordan Henderson (6/10): Came on and did well to keep the midfield ticking over, but it'll be in the coming weeks where Henderson shows his true value to Liverpool under Klopp. His calmness under pressure helped the Reds keep hold of the ball in the final few minutes.

Daniel Sturridge (5/10): Didn't do much, but it was nice to see him back playing again. Something that could be noticed, was how Liverpool's other attackers came to life when he stepped on the pitch, with Sturridge's impressive movement complimenting those around him.

Liverpool VS Chelsea match preview: Can the Reds make it back-to-back wins? 4 hours ago

The Warm Down: Reds return to winning ways 2 days ago

&nbsp;Liverpool's reaction is now key for the future 9 days ago

The Warm Down: Premier League embarrassment continues for Liverpool 11 days ago
//