Riyad Mahrez led Leicester City past Swansea City on Saturday at the Liberty Stadium with a sublime performance and hat-trick.

The Foxes enjoyed a dominating 3-0 victory in Wales and now they find themselves at the top of the Premier League table, whilst the Swans wallow near the bottom.

Mahrez got Leicester off to a flyer, opening the scoring after less than five minutes, and his team just got better from there on in as Swansea disappointed.

Another for the Algerian after 22 minutes put the now-league leaders comfortably ahead, whilst his third 23 minutes from time sealed all three points and ensured he took the match ball home.

Foxes quick out of the blocks

From the start it was clear that the visitors had one goal and that was to get the three points. Within the first five minutes they were ahead and after that they never seized control of the game.

Their opener began with a corner from Marc Albrighton, who swung his delivery into the heart of the penalty box where Mahrez was waiting to knock in his first goal of the day, making the slightest bit of contact with the ball to make it 1-0.

After giving up a goal Swansea began to fall behind. They struggled to keep possession of the ball and, as a result, their attack caused no real danger or was able to test Leicester’s 'keeper, Kasper Schmeichel.

At the other end, the passing of Leicester split open the heavy footed defence multiple times. In the 14th minute, Jamie Vardy nearly continued his goal scoring streak when a few passes set up a one-on-one opportunity with Swansea 'keeper Lukasz Fabianski. Yet, the leading scorer in the division failed to put the ball past the Pole and the Swans were still alive with just a narrow 1-0 deficit. 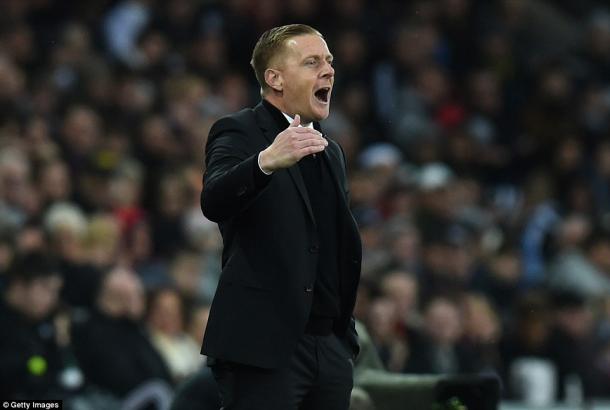 Speculation is surely only going to grow regarding Garry Monk's future after this defeat. (Photo: Getty)

However, the keeper's save did not bring Swansea any momentum, instead it only motivated the Foxes to get another goal and a few minutes later, their passing caught the hosts' defence sleeping once more and punished them again.

This time it was a pass from N'Golo Kanté that broke through the back line, the French midfielder launching a high ball into the box which found Mahrez in perfect position to score. The Algerian started his run a little too early and was offside, but the linesman did not raise his flag and, sadly for the Swans, their defenders stopped, looking for the whistle. They were to pay for this as the speedy Mahrez was given space to control the pass and then calmly slot the ball into the left hand corner to make it 2-0 after 22 minutes.

The Liberty Stadium went silent after Mahrez's second goal. The Swans were still struggling to connect passes and the Foxes were pushing for the third. At the end of the first half, the home club had only had one shot and it was off target - Leicester, on the other hand, had had five shots and four of them were on target.

At the break, Garry Monk made a change, introducing winger Jefferson Montero for Wayne Routledge. The substitute seemed to spark confidence in the Swans attack too as they had six efforts on goal in the first 15 minutes of the second half, one of which struck the post, but they were still not able to break through.

Instead, Swansea's positive response was quickly ended in the 67th minute as Mahrez wrapped things up.

Vardy may not have scored on the day, but he was great once more and involved in this goal, feeding Kanté who sprinted through the defence and into the box. His run hoarded the attention of the Swansea defenders, and before they closed his angle he poked the ball back to Vardy.

The leading scorer of the league did not waste time to stop the ball, he just started to turn and with his back to the goal he passed the ball to Mahrez who sealed the win with another low shot to the bottom left hand corner.

This killed the game off, with the Swans too discouraged to fight back as they slumped to another defeat. The pressure is now mounting on Monk with the team boasting just one win from their last 11 games, with rumours beginning to circulate about his future even more rapidly.

Things don't get better for his side either as their next game requires a trip to the Etihad to face Manchester City, though it is unclear as to whether or not he will still be in charge for that fixture.