The fight between first and second place in Group B was up for grabs in Switzerland this evening, with Liverpool coming out on top despite a goalless draw. As a result, both sides progress into the knockout rounds of this year's competition, to be drawn next Monday in Nyon.

The game itself was not action-packed with plenty of goalscoring opportunities, which was unsurprising given neither side wanted to lose - plus the quality of the turf contributing to a lack of fluidity in the final third too.

Roberto Firmino tried his luck from range with less than ten minutes on the clock, but merely stung the gloves of goalkeeper Andris Vanins in-between the posts.

Sion were unable to truly unlock the Reds' defensive frailties when they needed to most, Kolo Touré and Dejan Lovren would have been relieved to see Edimilson Fernandes' effort balloon over the crossbar after the youngster seamlessly weaved his way towards the area in a threatening position to break the deadlock.

Origi unfortunate not to score

Divock Origi was unlucky not to open the scoring shortly afterward at the other end, taking advantage of some lacklustre defending as the Sion backline seemed reluctant to play forward with any hint of urgency, and were fortunate not to be punished by the Belgian forward.

Ignoring the run of Adam Lallana to his left, the 20-year-old curled a swerving effort of his own from the edge of the area, which flashed inches wide of the far post.

Fernandes meanwhile, should have done

Fernandes had another great opportunity to, at the very least, test Simon Mignolet on the counter-attack.

He utilised his pace and close-control dribbling to good effect, but the same simply could not be said for his shooting. His strike was poorly connected and Mignolet watched on comfortably as it trickled well wide of his goal.

Half-chances were at a premium after the break and 21-year-old fullback Brad Smith - who was excellent for the visitors - was unfortunate not to grab a deserved assist with less than ten minutes to play.

The 21-year-old embarked on a slaloming run forward, left his marker in the dust, and curved a teasing cross toward the path of Origi. However, he was unable to latch onto the ball, and the goalkeeper was quick to smother the danger.

At the full-time whistle, Sion players, coaching staff and supporters alike all celebrated as though they'd won the match. 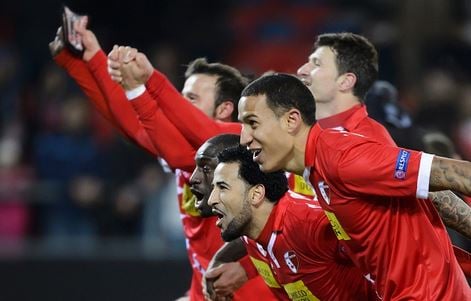 Despite the goalless affair, both sides have progressed into the knockout rounds - which is certainly something to celebrate. However, either side could, and probably should, have snatched more than a point from the game itself.

Does Nat Phillips deserve more game time? a day ago

&nbsp;Liverpool's reaction is now key for the future 2 days ago

The Warm Down: Premier League embarrassment continues for Liverpool 4 days ago

The Warm Down: Liverpool triumph with a commanding win in Europe&nbsp; 8 days ago
//