Crystal Palace have bolstered their defensive options ahead of the start of the 2017/18 campaign, with The Eagles announcing the signing of Manchester United starlet Timothy Fosu-Mensah on a season-long loan.

Manager Frank de Boer has been working hard to bring players into Selhurst Park since the announcement of his appointment back in June, but the former Ajax and Inter Milan coach has only managed to two signings thus far with the loan signing of Ruben Loftus-Cheek and the permanent capture of defender Jaïro Riedewald.

De Boer will know Fosu-Mensah well having been at Ajax at youth level for six years before his move to the North West of England, the 19-year-old has emerged as one of the bright youngest talents at The Red Devils having made his debut under former manager Louis van Gaal back in 2016.

The versatile youngster who can play at right-back, centre-back or defensive-midfielder hasn't really been given an opportunity to show his true potential but impressed on United's recent tour of America, Fosu-Mensah completed his Palace medical on Monday with manager José Mourinho confirming his absence from his squad ahead of United's UEFA Super Cup clash with Real Madrid.

"No Tim Fosu-Mensah because, in this moment," Mourinho told his pre-match press conference addressing the side he brought to Macedonia. "Tim is probably going on loan to another club. So we made the decision not to travel with him." 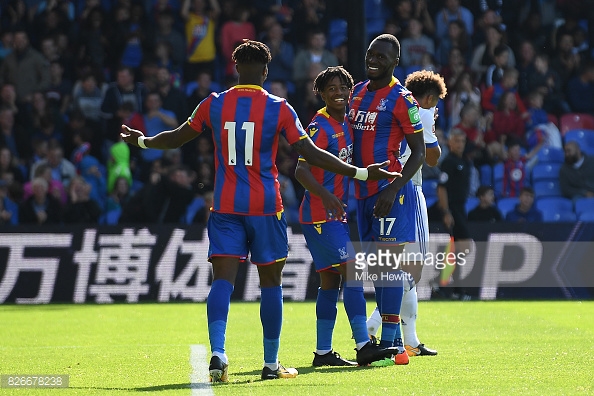 Palace will start their Premier League campaign down the road from Fosu-Mensah's parent club as they travel to the newly-promoted Huddersfield Town, The Eagles' pre-season regime has been vigorous with a trip to the Far East but have found good form which continued at the weekend with the visit of Schalke 04.

It didn't go according to plan to begin with as they trailed at the break through Pablo Insua's effort, but they secured the 1-1 draw with Christian Benteke's effort and the Belgian stated that he hopes they can take their "good football" into the opening league fixture.

“We can be happy with how we played in the draw," Benteke told cpfc.co.uk. "And obviously the manager has a certain way of how he wants us to play."

"So this match gave us another opportunity to work on that against strong opponents," the striker stated. “They are a good side with have a history of finishing in a good position in their league each season."

"We played some good football in this match ourselves," Benteke concluded. "And can hopefully take that into the next game."

Fulham 1-2 Crystal Palace: The Eagles’ clinical finishing the difference in London derby a day ago

A successful transfer window for Crystal Palace? 7 days ago

The inside story of Crystal Palace Baltimore 12 days ago

Chelsea vs Crystal Palace preview: How to watch, kick-off time, team news, predicted lineups and ones to watch 23 days ago

Crystal Palace 1-2 Everton: Richarlison and Calvert-Lewin dispatch Everton to the top of the Premier League a month ago
Restore your password
Please enter your user name or email.
Login Member or Writer Panel
Enjoy your own Customized Newspaperwith VAVEL topics' carousels!