Tottenham Hotspur boss Mauricio Pochettino apologised to Manchester United after he felt some of the fouls given away by his side were too reckless for a friendly.

Three yellow cards in a pre-season friendly tell the story

Despite it being a friendly there were yellow cards branded to Dele Alli and Japhet Tanganga, which indicates the feistiness of some of the challenges, whilst Moussa Sissoko appeared to stamp on United’s Daniel James, who was a threat all game, with the heat seemingly getting to the players.

The footage does appear to show that James held on to Sissoko’s leg, so that one was perhaps not intentional, but it is up for debate, nonetheless.

Andreas Pereira was also booked, making it three cautions in a pre-season fixture, with Pochettino quick to apologise for the behaviour from some of his players.

Speaking to the media after the game, the Spurs boss was asked if he was worried about the possibility of players getting injured at half-time after the bookings in the first half, he said:

“I was a little bit annoyed about some situations, I was not happy. It was a friendly game and, in some situations, of course when you are tired, when it’s so hot you are not right with the tempo [and] sometimes you arrive late, and something can happen.

"I apologise on behalf of our players to Manchester United; I think in the second half they made it to us, but then it’s football.

"It wasn’t their intention, but sometimes when you are tired you arrive late and somethings can happen and I was worried because in this period of preparation you need to be aggressive.

"You need to play with passion but sometimes the focus is to build your fitness and develop the way you want to play.

"Of course, I was worried [when] Eric Bailly got injured and I am sorry for that but he was alone, when something happens in pre-season it’s always tough and I was a little bit worried but in the second half the game was a bit more relaxed.” 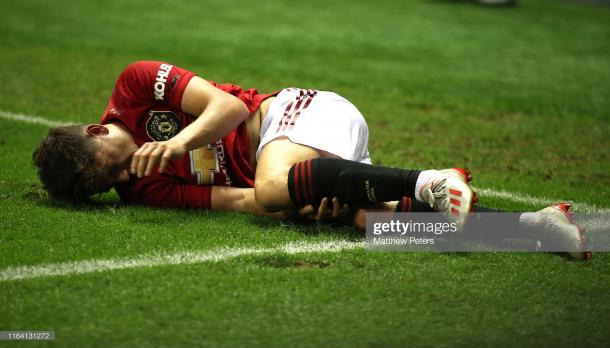 Spurs were certainly more aggressive in the first half and it appeared to many that they were targeting the likes of James and Martial.

Although United manager Ole Gunnar Solskjaer took a diplomatic view as he insisted the fouls on James were unintentional and fair, he said:

“Of course we want the players to be looked after, but it’s a man’s sport, we can’t lose tackling in football as long as you tackle fairly.

"Dan is so quick and it’s not easy to time tackles against him.

I have no qualms about some of the tackles. You worry – but we also gave, we did not just receive.  I thought it was a very good game.”

The Warmdown: Spurs seal a spot in the round of 32 17 hours ago

Injuries are back at Hotspur Way 3 days ago

Jose Mourinho:&nbsp;“I am happy that we are unhappy” 6 days ago

Jose Mourinho:&nbsp;“Chelsea is just another game” 7 days ago

Vinicius Named UEL 'Player Of The Week' 7 days ago

Tottenham Hotspur vs Ludogorets preview: Team news, ones to watch, predicted lineups, how to watch 10 days ago
Restore your password
Please enter your user name or email.
Login Member or Writer Panel
Enjoy your own Customized Newspaperwith VAVEL topics' carousels!