Bradford City have unveiled their final signing of the 2021/22 season, as former Southend United and Port Vale attacker Theo Robinson joins the club.

Robinson, who began his career at Watford, is no stranger to West Yorkshire after making 43 appearances for Huddersfield Town in 2009, and netting 16 goals.

The 32-year old had his most successful spell with Derby County, where he managed 23 goals in 83 matches.

Robinson is also no stranger to Sky Bet League Two, having spent the last two seasons with Colchester United and Port Vale, netting 18 goals in 71 outings.

A powerful attacker whose had his fair share of clubs, Robinson brings experience to Valley Parade.

With the options of Andy Cook and Caolan Lavery  up top, Robinson brings knowledge of the lower leagues into the Bradford squad.
Robinson also shows pace up top, with an ability to get behind defenders and to poach the chances created for him, something which is ideal for the creative players like Callum Cooke and Elliot Watt.

It was never a secret that Bradford wanted another striker through the door, so Robinson’s arrival is welcomed.

Cook and Lavery are the only other strikers currently at the club, so Robinson brings a new option and much needed cover to a position which could become a liability if there was to be an injury problem at the club.

Along with that, with the Bantams prioritising a 4-2-3-1 formation, Robinson has the pace to also be utilised as a winger, like Derek Adams did with Lee Angol earlier in the season.

Manchester United vs Villarreal Preview: How to watch, kick off time, team news, predicted line-ups an hour ago

FC Porto vs Liverpool: best of Klopp and Jota's pre-match comments 6 hours ago 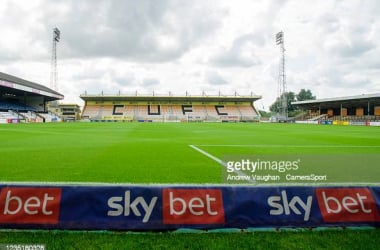 Cambridge United vs Gillingham preview: How to watch, team news, kick-off time, predicted line-ups and ones to watch an hour ago

Christian Benteke vs Odsonne Edouard: Who should start vs Brighton? a day ago

The Warm Down: Watford lucky to get a point as Newcastle fail to take their chances an hour ago

Manchester United vs Villarreal: Can Solskjaer's side turn around their European fortunes? an hour ago

North London Derby defeat for Tottenham Hotspur an hour ago

Nuno Espírito Santo: "A lot of things went wrong, starting with decisions that I made." 2 days ago
//